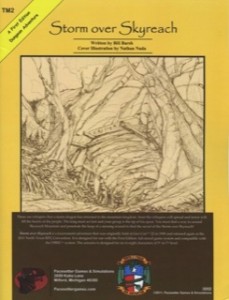 This is a tournament module. According to the introduction it was originally written for GenCon 22, in 1989, and then updated and released for the 3rd North Texas RPG con in 2011. The module is divided in to two parts in order to accommodate two rounds of play. My only other experiences with tourney modules are the C1/C2 series, as well as the expanded ‘conversion’ modules, such as the S series. The difference between the two is one of linearity. Tournament modules, must, by their nature, be rather linear and constrained. The expanded S series took the their convention roots and expanded in to something more exploratory and less linear. Storm over Skyreach is certainly a real tournament module, complete with pregens and scoring. It can easily be used as a linear dungeon for a group over a couple of sessions. In fact, it may be LESS linear and more interesting than many 4E and 3E modules.

The backstory revolves around an evil wizard. A few years back he raised a couple of armies, which contained some dragons not seen before, and set about  subjugating the surrounding area. His dragons abandoned him and he lost the war he started and disappeared. It was rumored he had a hide-out high up on Skyreach mountain, however the existence of a barbarian tribe, and war-weariness, made following-up difficult. Now, 50 years later, one of the wizards Storm dragons has been sighted in the area which is renewing fears that he wizard is once again gearing up to cause trouble. The party is sent to find and investigate the Skyreach lair.

After a brief roleplaying encounter with the king the party journeys to a village to rest overnight on their way to the mountain. A ruckus starts outside when a skeletal figure on a winged black horse shows up [I think I had that micronaut when I was a child!], complete with skull in hand, and shouts threats and starts a building on fire. A building with a child in it. Oh, and he turns a stone giant statue to life in the courtyard. Did I mention he also shoots some Shadows out of his skull? That’s a nice warm-up situation for the party!

More role-playing encounters happen with the barbarians tribe, and some wilderness encounters getting to and up to the mountain lair. There’s a great moment with a ring of delusion which is found at he top of a cliff. Nice! Here’s a helpful adventuring tip: don’t experiment with newly found items when you are in potentially perilous situations, like on top of cliffs or in the middle of lava fields. There are a couple of cave encounters prior to reaching the mountaintop lair. The first portion of the module ends with an encounter at the top of the mountain with a Storm dragon. The first half of the module has a few role-playing encounters, a few puzzle encounters, and a few combat encounters. I found it interesting and not at all boring. It should be a nice 3 hour challenge of a group. This first half does have a couple of issues. First, the skeletal figure on the horse flies off before the party can react. This is good from a ‘previewing the villain’, after all, we don’t want another Lareth situation do we? Better to get the party worked up over the Big Bad. I can’t help shaking the feeling though that it’s a bit of a cheap shot. Secondly, there’s a section where the party is knocked out and captured. This is less of an issue in a tournament module, since it’s most;y a series of set pieces anyway, however it still leaves me a bit anxious.

The second half of the module is meant to be round two and has the party exploring the wizards lair. It feels smaller and shorter and much more straight-forward in a ‘dungeoncrawl’ kind of way, even if it is a simple one. There are fewer puzzles, fewer interesting situations, and, IMHO, less fun. It feels like a tack-on rather than the focus of the adventure, which is what the backstory sets it up to be.

Yes, it’s linear, but it IS a well-written tournament module. Meaning that it has plenty of role-playing encounters, tricks, traps, and interesting situations for the party to navigate. It also, necessarily, has a ‘correct’ way to play, since the parties actions have to be scored. It does give some good advice to the tournament GM in running the party, managing their creativity, and limiting the amount of frustration the party may feel.

If this were a 4E module then it would probably be the greatest module ever published, given the non-combat encounters and exploration options. As it is, it’s an above-average OSR module and an excellent tournament module.