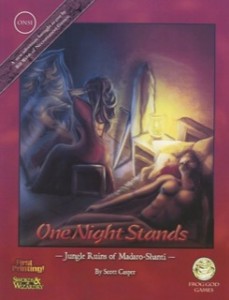 Travel back with me now to the days of yore! Join with our heroic barbarian thieves as they explore ancient ruins deep in vine-covered jungles and battle the serpent-man cult! Explore ruined palaces full of deadly traps until the cure of ancient Madaro-Shanti is lifted!

This module has only tenuous ties to the above statements, but they should get you in the mood, and you really need to be that jungle Swords & Sorcery mood to get the feel for this adventure. This is a part of the Frog God Games One Night Stand series, meaning that it’s supposed to be played in a single evening or so. That explains the cover, which depicts a kind of one-night stand, rather than having anything to do with the contents of the module. Now. please ignore the module cover and go reread my intro so we can all get back in the mood!

This module is pretty damn good, and, along with ASE1, is one of the highlights of my “buy every OSR module at GenCon”  extravaganza. It does take a little bit to get in to it, but once there you should pick up on the feel quickly. There’s a city on the edge of a jungle. A dark an ominous cloud is moving through the jungle towards the city, killing everything in it’s path. The party is recruited to head in to the jungle, find out what’s going on, and stop it before the cloud reaches the city! Popular opinion holds that the clouds are originating from a cursed city that lies in ruins, reclaimed by the jungle it sits in. Our fearless party sets forth, probably along a ruined and overgrown road, in to the jungle to find the cursed city and lift the menace.

After exploring the rumor-table in the table there’s a four-day journey ahead of the party through the jungle until they reach the ruins. Along they way they are certain to meet some of the jungle inhabitants that are WANDERING about. Get it? I’m referring to the included wandering monster tables but I cleverly, and quite subtly, worked it in to a sentence. I didn’t want you all to miss it though so I placed it in all caps to draw attention to it. Then, of course, I explained what I did in detail. Clever, eh?

There’s a decent amount of good wandering encounters, quite a few of which focus on the new included monsters. We get ape-centaur creature, ghoul monkeys, giant vampire bats, and monkeys with 2 heads and six arms. Those should give the party a few things to think about on the way to the ruins. In addition, there is a series of special encounters that can occur randomly. The spirit of the jungle is attempting to warn off  the party, and is doing so in a rather creepy way. Things like encountering a swarm of biting black flies whose buzzing seems to be saying “cho-odo. cho-odo.” or maybe the antelope that the character sees in the distance in the jungle, who is staring at him/her. Transfixed, the character hears the antelope say “Beware cho-odo. Rescue cho-odo.” then the antelope falls over dead. Closer examination reveals it’s been dead for days. There are eight encounters in the same vein that can happen on the wandering table. Good stuff! I heartily approve of freaking the party TOTALLY out before they get to the ruins. That sort of atmosphere building is too much neglected in adventures.

Reaching the ruined city there are three places for the party to explore. First, there’s a small ruined gatehouse. It’s a minor location and not mapped. Besides housing a large contingent of ape-centaurs it also contains a winch which has both an obvious impact and a non-obvious impact. The second location is a well. It’s not really obvious that this is an adventure location, other than that the fact that it’s a large well with some ornate carvings on it. In addition to being a well it also contains a rather devious, but obvious, series of traps. The payoff is more “secret changes to the dungeon”, as with the winch in the guardhouse, and some treasure if the party makes it to the bottom. It’s quite a clever and interesting arrangement of traps, each of which is presented with enough clues for a party in “explore” mode to defeat before being negatively impacted by them. Again, good points for making traps that an careful/insightful party can avoid.

Finally there’s the ruined palace, with two upper levels and two underground levels. There are multiple ways around the four levels so there are lots of ways for the party to explore the ruined palace. Holes in the walls of the first & second floor, rubble piles that can be climbed to reach upper levels, holes in the floor that can be used to reach lower levels, and stairways that bypass/skip middle levels all lead a ruined feel and a map complexity (in a good way) that is not immediately obvious at first glance through the product. Score! Interesting maps with multiple ways around them put the party in control of their destiny.

The ruins have some more of those ghoul monkeys in them, whose presence is augmented by some decent vermin and some intelligently undead placement. That’s ‘intelligent’ as in ‘the designed did a good job justifying their existence they make sense in the context of the module’ rather than ‘vampires & liches.’ Again, this earns some serious points with me. I like my ruins to have ooze, bugs, and undead, especially when they are placed in such a way as to make sense in their context. They also don’t live in a vacuum; fights in one area may attract creatures from another area, or opportunistic creatures. I’m very happy with the creature encounters.

Finally, there are a lot of good tricks/traps in the module. They mostly fit in well with the environment. Clues are scattered about and there are generally warnings available for a party that is paying attention. I LOVE statues, pools, gems, and other things that ‘break the rules.’ This adds the element of the unknown to the adventure and should really get the party A) Freaked out and B) Greedy. Seeing the PC’s battle those two elements, and the tension is creates, is one of the great joys of DMing, as well as of playing. “ooooo! Am I going to get a permanent point of STR or be turned in to a toad is I press the big red button?” That’s not a specific situation in the module, but I hope you understand the type of encounter I’m talking about. Something unknown that could lead to great reward or great peril.

This is a great module.

*) Creepy encounters in the dungeon!

*) Tricks & traps that fit in and don’t remove player agency!

There are a couple of issues. First, the cover doesn’t relate to the interior and I feel it put me off, or rather didn’t get me in the right frame of mind for the adventure. Once I figured out “ruins in the jungle and serpent men” then I got myself in to the right frame of mind. Second, I’ve read the well encounter several times and STILL don’t have a great idea of how the thing works, in a global sense. It’s not for lack of material on the publishers side; there is a player handout, several DM diagrams from different perspectives, and a decent amount of text. i’ve got a good idea of who things work in each well area, but not how things fit together as a whole. That’s not too big a deal and it’s probably a problem with my thinking style rather than with a lack of information from the publisher or substandard text.

This is a good module. It clearly has that Old Style feel, coming from the elements I mentioned above. It also has a good Swords & Sorcery feel to it, without being trite (Ape-centaurs instead of serpent-men.)

This is available on DriveThru