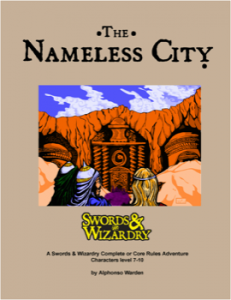 Enter the deadly city of the degenerated serpent-people … If You Dare!

It is a rather well known fact that I tread where Solar fear to go, so I dared enter the Nameless City. There isn’t much of a lead-in, just an overly long backstory and a few throw-away lines of a hook; the characters hear rumors of riches in an abandoned city in the desert. There’s no wilderness adventure or wandering wilderness creatures either; this is a site based adventure in the Nameless City, pure & simple.

The remaining portions of the city are rather small, since the civilization is collapsing. There are really only three locales to explore: the wizard pyramid, the temple pyramid, and the palace pyramid. There are about fourteen rooms in each pyramid, scattered in each pyramids two levels. As the encounter quantity would indicate, the maps are rather small and cramped, with mostly linear designs. This strongly limits the exploration aspects of the adventure; the only place to go is generally forward.

The rooms are fairly straightforward and there is a decent amount of duplication between the various pyramids. The food storage room, the cold larder, the initiates rooms, the instructors room, the treasury, etc. There’s a very high number of trapped chests and symbols of [death, etc], and a large number of serpent-people spell-casters, since two of the pyramids are clerical and wizardly. The symmetry goes too far sometimes; the treasuries of these two each contain two books for the MU/CLERIC to gain a level. In all, the place feels too impersonal and rather generic. This despite the fact that there is a LARGE amount of ‘boxed’ text for each room. Except it’s not boxed, it’s in italics, which make it MUCH more difficult to read. The text is very descriptive, in a Lovecraftian way, and it appears to be trying to set a certain mood. I don’t think it works very well;  it’s too hard to read the massive amounts of italicized text, and that much text is too much even if it weren’t italicized.

There are more than a few things I have a problem with. The giant crystal from the authors module The Conquerer Worm makes another appearance. Or maybe it appeared in this module first? In any event, that reuse is a bad thing. AC -6, 400 HP, 90% resistant to magic, only hit by magic weapons, hitting it causes 25 points of damage to the attacker per strike, etc. The authors No Teleport/No Passwall makes an appearance as well, as do several “save at -7” rolls.  Multiple rooms have monsters which surprise on a roll of 5 out of 6, including the black pudding in the privy. Really? There’s no way any player on earth, even my 11 year old son, is going to be surprised by a monster coming out of the privy.

You know why this civilization of serpent-people is dying out? Because NONE of them, with perhaps a single exception, will come to the aid of ANY of the others. They all sit squarely in their rooms waiting for the next party to come through and preparing spells. Deathtrap dungeons are not old school. Hack fest adventurers are not old school. Old school does sometimes contain those elements but appeals to ‘Old School’ to justify bad modules design are, frankly insulting. Creative play and player agency are old school. Limiting options through the use of teleport/passwall bans does not foster player agency, it does THE OPPOSITE. There’s no chance for the players to do much except hack the monsters and suffer the traps. No factions, no real exploration, no weird magic items, no new monsters of note to freak out over, no weird and strange things in the dungeon to play with. No Joy. The stagnation of the serpent-people seems to have leaked over.