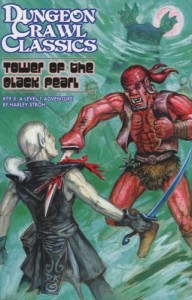 Once every decade, the tides of the Empyrean Ocean recede far enough to reveal the highest eaves of a mysterious undersea tower. Long ago this was an eldritch fastness of Sezrekan the Elder, the most wicked wizard ever to plague the Known World, but now the tower is known simply as the final resting place of the fabled Black Pearl – an artifact rumored to bring doom upon all who dare to posses it. Tonight the moon nearly fills the sky, and the tides have already begun to recede. Adventurers have eight short hours to explore the tower before the dark waters return. The fabled Black Pearl will be theirs for the taking…if they can survive the Pearl’s curse.

This is a moderately interesting exploration of a wizards tower in search of The Black Pearl. As such, it’s full of freaky wizard shit and a throw-away group of rival adventurers. It’s got a linear map but, as with most of the new DCC, is still pretty interesting. Not the best Stroh has ever done but still better than most adventures.

Sezrekan is one of the awesomely powerful patrons from the DCC core book. Seems he left his mortal remains in a tower off the coast. Once every decade, for one night, the sea recedes enough for people to gain entry to it. Inside is the fabled Black Pearl and whatever other aweseominities that Sezrekan had in life. The hooks provided are pretty lame, from being hired to finding a map. “Vecna’s tower is offshore” should be MORE than enough hook to get any self-respecting player in to this adventure!

The tower is purely a linear affair. While there’s no seawater inside there is also no alternate routes. The core concept it a teleportation arch that you have to get working to get to the final tomb/pearl location. Getting there and looting the pearl causes the tower to flood, ending the adventure. Arrayed against the party are some pirates running around the first half of the tower, also looking for the pearl, a couple of golem/construct-like things, and the weirdness of the tower proper. The pirates and “fetishes’ are not super interesting. The tower, however, is.

One room is full of candles, and a book. Each cable represents the life of one lawful hero. Put out the candle and end the life. Relight an out candle and bring them back from the dead. Neato! There’s also a rickety bridge over a lake, and a straight-out-of-Charon ferryman. Portals activated with blood and unique magic items round things out., along with some traps that don’t seem overly-grimtooth but are still varied and interesting enough to engage. Like the room full of poisonous sea snakes! How ya gonna deal with that Mr. Adventurer?! It’s up to you, no real solution is offered, which is just exactly the way it should be.

Stroh does a good job with the room descriptions. The encounters, the non-monster ones anyway, are varied and interesting. At least one of the pirate encounters is a good one (sneaking up on drunk pirates) while the others are just the standard filler combat encounters. It’s a decent enough adventure to keep.