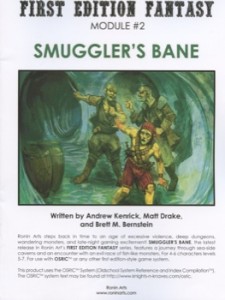 Possibly the most boring, worst, OSR module of all time.

The party must stop some smugglers in sea caves. Oh’s No’s!

I am generally loathe to say a module sucks. I’m looking for megadungeons and whimsy, you may be looking for something else. Most of the time I just try to mention what’s in a module so you can get a better idea if this is the sort of thing you might be interested in. My conceits come through most of time in the focus I give to exploration maps, weird things, and  unique monsters and items. Map errors, spelling and grammar mistakes, lack of balance, organization problems, all of those generally get a pass in my book. I’m looking for something to fire the imagination, and the correct use of the apostrophe would fall in to the exact opposite camp, as my own spelling and grammar attest. In this module review I’m going to make some exceptions to how I generally do things.

This module sucks. From front to back it sucks. It may be the worst adventure module I’ve ever seen. Worse than the linear travesties of 4E. Worse than the worst dreck of the d20 era. Worse than the boxed text nightmares of 2E-land. It has absolutely no redeeming qualities. “2 girls 1 cup” has some shock factor. This does not even have that. I  guess I should point out why so my hyperbole is not wasted.
The players are sent to bring some smugglers to justice. They

hang out in some sea caves nearby. The party doesn’t know that they’ve been mostly wiped out by fish-men, who also live in the sea caves, and are about to be sacrificed. There’s  whole backstory of fish-people who live under the sea, with their competing cities and settlements, an ancient evil cult of a crab god, and so on. This goes on for far too long and is almost all meaningless. None of it really matters. There’s a fish-man priest and he’s sacrificing people; that’s the extent of what matters. The rest of the flavor text is meaningless and has no relevance to the sea caves.

The adventure is organized in four scenes. Plot alert! Plot alert! No, wait, that’s just the header titles. It’s really a description of the hook, the wilderness adventure, the sea cave adventure, and the sacrifice. No plot except for the one the players make. The hook is lame. “Drunken pirate reveals location of sea caves while in a tavern.” or “Mayor hires party to eliminate smugglers.” The wilderness adventure is uneventful. It’s just a stroll over to the sea caves along the top of some cliffs. It gets two paragraphs. I have no idea why it was included.

The sea caves have 14 encounter areas. The map is not technically linear, but it is made up of those cardboard tiles that are so popular these days. It reminds me of a 4E map. That’s not a complement. The first eight rooms are empty of encounters, since that was the base of the smugglers who were so recently wiped out. The party would be smart to just pick up their treasure and leave. That’s what I would do. Easy XP! Doing so will net the party 1000gp in treasure and a magic dog collar. This is the total extent of the treasure in the adventure. Let’s see, six 5th level characters will need 5000xp each, on average, to reach 6th level, and will earn 166xp each from the money if they recover it all. That’s not going to do at all.

The second half of the map “deep inside the caves” [ed: 80 feet to be exact] is the domain of the fish-men. I think. Ok, I’m sure, but I’m not sure of how many there are. The creatures are embedded in the text, the LENGTHY text, of each room. They are not highlighted in any way so it’s a chore to figure out how many there are in each room. There are two fish-men farmers, who are not fighters in one room. There are two fighter guards in the next room, a giant crab, and the fish-man priest. The temple, with the priest, makes reference to there being some guards in it but it doesn’t note anywhere how many. There are also no stats ANYWHERE for the fish-man priest, the main villain. The fish-men are really nothing more than 6HD orcs who live underwater, so nothing too interesting there. If I were writing  dissertation on the history of fish-men religious sites then the overly long text in each room would be of use, otherwise I don’t really care what/how the room is used for when visiting dignitaries show up, since there are none and that’s not a part of the adventure. Arg! Useless information! Supposed to fire my imagination! Baby baby baby baby baby baby baby baby baby baby baby baby ba  whoops, slight case of Devolution there. Oh wait, I missed the three 2HD statues that attack the party.

To summarize: Smugglers. Linear. Sea Orcs. B O R I N G. Worse than that, it’s unclear, verbose, and boring. This was clearly a conversion project, from 4E would be my guess since it references “4 ranks in medicine” at one point. The credits list four people involved in the creation of this; I can’t imagine how someone didn’t catch the obvious problems with the adventure; the lack of inclusion of the temple guards and the priests stats would have been enough to bring some light to this mess. There is no joy at all in this module. Most home-brew at least shows some bit of creativity or special bit of love it was built around. Not so in this; it smacks of some “I need to publish an adventure by Tuesday.” I’d say it was cashing in on the OSR name but I don’t think anyone in the OSR is making any money. I’m at a complete loss to think of a reason why this was published.