Into the Mite Lair 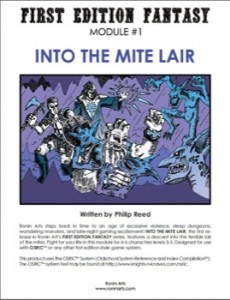 This is a two level cave system housing jerlamain. It is a good example of a mediocre OSR module.

Bob the Sage is looking for a magic sword. He sends the party to investigate some caves in the mountains.

That’s the extent of the hook. Ok, so, the sages name is actually the more pretentious sounding Alexar, otherwise the hook is presented faithfully. I’m usually a fan of terseness, however Bland is never in style. The background and introduction is suitably brief, coming in at only one page with almost half of that being a rumor table. I wish that one page was a little more interesting. The rumor table could have been an excellent opportunity for building up the caves, the mites that live in them, and the stranger in charge. Instead we get: the strange that passed through the village ten years ago was not of this world. Ahhh, come on! How about mentioning some of the atrocities he committed, or some bizarre behavior? Both of those would have added to the villains reputation and gotten the parties juices flowing. There’s no wilderness adventure on the way to the caves, but there is a very small, and lame, wandering monster table for the wilderness. Kobolds, goblins, wolves, giant spiders, giant ants and stirge. The DM is advised to roll once on the journey to the caves. The monster selection is uninspiring and lends nothing to the adventure and there are no stats provided. It’s pretty much just wasted space.

The adventure takes place in a cave with two levels with about 28 rooms between the two levels. Level one is a trident shape; three different linear maps connected at the beginning. Level two has rooms and corridors surrounding a large underground lake. These are not the type of maps I like seeing. The module is supposed to be an exploration to find a sword, but the maps only lend themselves to a grind, especially level 1. The encounters proper tend toward the verbose side. For example, room 0 of this module:

A twenty foot deep crack in the mountains, with no hand holds or foot holds, drops straight down in to a dark cavern. Torches dropped or lowered in to the crack reveal a passage leading to the south, though no other information is available without dropping down in to the crack. It is best of the characters use ropes to climb slowly down the crack, though the rash among the group may elect to leap down in to the cavern below (suffering normal falling damage.)

That’s a large paragraph that adds almost nothing to the adventure. It does convey the entrance is a cavern pit, but thats it. How about “Sinkhole entrance. 20′ deep.”? There we go: not only does that convey the same information but it actually provides more; now we know how much falling damage to apply. Hmmm, I also usually complain about being evocative, so how about: “Gloomy sinkhole entrance, 20′ deep, located in a misty dell.” Ta Da! Don’t take this as me singling out this room or this product, quite a few modern products do this, which is what I mean when I reference a module or entry as being overly verbose. Encounter keys need to be terse enough to scan quickly, yet convey JUST enough information to get the DM started on the room.

With a two exceptions, the module doesn’t really have anything interesting in it. The new monsters are “Hobgoblin” and “Kobold.” New monsters are supposed to be wonderful and exciting and fill a party full of dread because they don’t know their abilities. “Does not appear in OSRIC document” does not mean it qualifies as a new monster. I wish more folks used bizarre new creations of their own. There are a couple of kobolds, armed to the teeth with magic swords, and some hobgoblins, along with the main bad guy, a ‘new monster’ version of a Gith. The last new monster is a Mite, which appears to be a Jerlamain.

Therein lies the one interesting feature. The wandering monsters on level 1 are all jerlamain, who retreat after one of their number is killed. Those that retreat add their numbers to the NEXT wandering monster encounter. This is a pretty good way to simulate an increasingly large number of monster attacks on the party. The defeated foe gathers more of their number and hit the party again. The party better hit them hard or they are going to have some serious troubles on their plates! The module also contains a great number of dead adventurers. I like that since it adds a bit of foreshadowing to the adventure and gives the caves a sense of history. If these dead folks were elaborated upon in the background/rumors then it would have added to sense of discovery and history of the caves.

1 Response to Into the Mite Lair