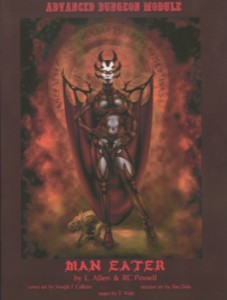 A desert wilderness adventure with a small dungeon and vengeance filled villain. A little work could turn it in to a very good adventure.

It’s a story as old as time itself: a servant girl sleeps with the sheik, get pregnant by him, and is then banished to the wastes for being a slut. Except, in D&Dlandia she has gypsy blood, makes a pact with a demon, and turns in to a vengeance spirit that lays waste to the surrounding countryside for well on 300 years now.

The backstory is longer than I would have liked, however it gets an A for effort anyway … The demon has taken over the fetus of the pregnant servant girl, and his fate is now tied to hers. The servant girl/demons rampages go on for 9 months before she lies dormant for awhile, and she eats the uteruses from her female victims but leaving them alive, otherwise killing all others. There’s also a demononess working to free her demon lover from the fetus. To quote Stan Marsh: “Dude, this is pretty fucked up right here.” I Approve! EVen if you don’t, it’s better than killing the spiders in some old ladies cellars.

The adventure is set in and around a wasteland/desert environment. There are extensive rules for dehydration, including the amount of water needed by the party and their animals, how much water spells can create, and the impact of dehydration on characters. There are also extensive rules for heat, including temperature variations during the day and how this impacts characters in various types of armor. There is some off-handed mention of sandstorms and the like. I would have preferred MORE sandstorm and physical environmental issues. The heat and water issues feel more like accounting to me … and just to be clear I do not enjoy accounting, especially while I’m trying to have fun.

The party is going to travel through the desert on some caravan routes, trying to figure out what is going on. The desert is about 240 miles wide and 350 miles long, so, pretty damn large. The wandering monster tables are mostly animals, which I approve of, I just wish they were a little more interesting. Essentially the party will wander around the desert, visiting an oasis or two and some ruins covered in sand. Once they’ve proven themselves worthy the demononess will show up, in disguise, and tell the party what to do, They need to go get a sword, kill a certain special giant scorpion to get it’s blood, coat the sword with blood, then go kill the servant girl/demon. Fetch Quest! This smacks of plot, but only just barely so. The core issue seems to be the demononess relaying the information after the party proves itself. That’s not nearly the best solution to conveying the needed information. I wish it had been better handled.

Most of the encounters are rough. A giant golem with the powers of a rust monster. A group of between 100 and 300 scorpions of various sizes, mountains of undead flowing from a well. I like these.  They present little set pieces for the party to play with. Hopefully the party is a smart one and isn’t going to wade in to an encounter with the scorpion king without some recon work first. That should reveal the VERY large number of giant scorpions. This should trigger some creative play from the party, which is one of the things I’m really for a module to enable. This sort of thing is carried over to the two caves complexes, to a certain extent, which will be major focuses of the adventurers. They are not large, six keys in one and 18 in another, but they show hints of greatness. Just getting to them will be hard; they are on a sheer cliff face the party will need to find a way to reach. One complex has a huge chasm that separates the chambers from each other. Overall though the encounters in the caves are not as interesting. Wilderness encounters, good ones anyway, can be very interesting because of the large number of ways a party can explore them. The enclosed space of a cavern or dungeon allows for less of this freedom, which is one of the reason I like weird and strange things in my dungeon. Those weird and strange things keep the party thinking creatively and keep them in exploration mode, albeit a different type of exploration. Too many of the encounters in the caves are of just another room filled with a beastie.

With a little work this could be a very nice adventure indeed. I would probably beef up the rumors of the main villain play up the uterus-eating thing. Ok, so the module doesn’t actually SAY she does that, but it’s heavily implied. The sort of foreshadowing should really get the party shaking, especially if it’s reinforced through a couple of corpse encounters in the desert. I would probably also beef up the cave systems a bit, maybe through a mashup with module AA#15: Stonesky Delve, or something similar. Those two changes, one minor and one less so, would turn this in a VERY nice adventure.