The Secret of Whispering Wood 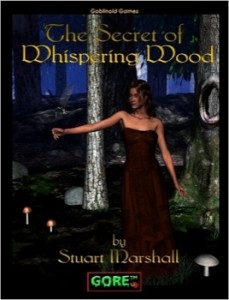 This is an adventure framework using a Runquest clone system. It has that Runequest feel, of mystic bronze-age fantasy, but is quite a barebones product.

It was a simple mission from the sage: gather some wood from a holy tree in the Whispering Wood. But dreams turn in to reality as the characters explore the mysterious sylvan wood. What evil lurks in the mysterious tombs of this majestic wood?

This adventure module is for the GORE system, a retro-clone of BASIC/Runequest. It involves the characters exploring an ancient wood and almost certainly getting caught up in the conflict within. The wood is about 40 miles wide and 20 miles deep. There are a variety of trail and roads that pass through it, as well as a small river that pools in a lake in the middle of the wood. There is no wandering monster table, but rather a huge boar that roams the woods that the party could encounter. Ol’ Yellowtusk is an interesting idea, but since that’s where the wandering monsters stop … well, I like more variety.

The woods have two notable features. The first is the lake in the middle. Being magical, characters looking in to the lake could imagine something wonderful and jump in and try to join it. Or at night they could imagine something terrible in the lake and jump in and try to fight it. That’s truly the extent of the lake. There’s an island in the middle that’s left to the DM to expand. There’s also a small ridge line near the lake with a bridge that is probably being watched by the badgermen, one of the forests two primary factions. That’s it, nothing more than “probably being watched.”

The two factions in the forest are both very deadly. The first consists of three fairy spirits who do mystic combat with the party who drain MP’s night, and then charm/control the characters during the day. It’s going to be rough to defend against; they are not pushovers. This faction wants the idols of the other faction destroyed and will command the party to do so if they take control of the characters. The other faction is a large tribe (24+)  of badgermen who like to perform live sacrifices once a month. Both groups are essentially immediately and always hostile to the party. The badgermen have a small  16 room temple complex near their lair that they’ve taken over. The temple complex has more than a few very nasty encounters and a couple of tricks in it: a golem that can’t leave it’s room. pools of slime, puzzle rooms, and so on.

Overall, this is just an adventure framework. Two small faction descriptions, without maps, and a small temple complex are not enough to sustain adventure right out of the box. If the GM were willing to put in some significant work  then something more workable can be obtained, but then again that’s true for almost every product. I was disappointed in factions. By both being hostile it gives the party nothing to work with. There’s no Fistful of Dollars available, just a combat with both groups.