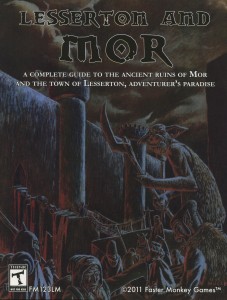 Once, the vast city of Great Mor stood as mankind’s proudest achievement, civilization’s farthest outpost, impregnable to any invasion… or so the Dukes of Morland believed. But when the mighty Half-Orc Lord unified all the barbaric humans and humanoids of Eastern Valnwall into a single giant army, and the Wood Elf King abandoned the humans to their doom, Great Mor fell. Something more than warfare tore through the city, destroying invader and defender alike, laying waste for miles around. The survivors clung to a bit of rock in the swamp and slowly built up the town of Lesserton: home base for any who dare enter the Ruins of Mor and hope to return with treasure and their lives.

I don’t usually review non-adventure supplements. I’m also near the bottom of my pile of purchases and it’s getting close to my GenCon pile refresh, so I’m filling in a bit with related products until I get my GenCon purchases in. Thus we get a review of Lesserton & Mor, which kind of fits my reviewing profile and kind of doesn’t.

Mor is an old ruined city full of adventure and Lesserton is the refugee camp that grew from its downfall and now makes its living thriving off of people going to Mor to adventure. A classic dungeon/home base set up. Only this time the dungeon is a very generic hex crawl in a ruined city and the home base fills the vast majority of content. There are three booklets provided: a players guide for characters who grew up in the region, a DM’s guide to Mor, containing the tables to create a hex crawl and a few other tidbits about the ruined city, and the DM’s guide to Lesserton, the largest of the books, describing the little town that’s always happy to fleece an adventurer.

Mor is a DM created Hex Crawl inside the walls of a ruined city. It’s about 26 hexes wide and about 20 hexes high, with each hex being about 120 yards. The referees book describes the basic layout, the various ways to get inside the walls, and the five or so main clans of Orkin/mutants that live in and near the city. These clans all have a totem and something special associated with it: fermenting honey in to drugs, poison spears, and so forth. They are also not immediately hostile and are willing to trade with parties, and also have inter-clan rivalries and hatreds. This is a great way to introduce role-playing and factions in to what could have otherwise been a straight-up hack. The rest of the book is divided in to two section. The first has various nested/chained tables that can be used to populate the various hexes in the city; terrain, occupants, intact buildings, weird stuff, monsters, etc.

It’s quite extensive and quite varied as well. There’s an excellent example at the end of this section that details how a series of four randomly generated hexes can be linked together to tell a story for the area. It’s a great example of how the DM can create a real environment by using the random table rolls for inspiration. The last section details the remaining Hate Elementals (IE: the force that animates skeletons, gargoyles and the like. Very Nice!) and the Petromorph Queen. She’s the mother of all trappers, mimics, etc. Both are cute little details that give a nice bit of strangeness to this setting. All in all, not so much an adventure as a setting generator with the DM randomly creating the hexes for a crawl.

The Lesserton booklet is about 2.5 times thicker than the Mor booklet. It does a pretty good job of detailing the history and feel of the town. Included in the first 26 page section are various tables and data to help you run the city. Generating random adventuring parties, the intolerance of various neighborhoods and peoples. Cost of living, haggling, gambling, drinking, bribery, hirelings, rumors, etc. This part also has little four page section on getting experience points from spending cash in town. Similar themes date back to the “Orgies Inc” article in an early Dragon and Jeff Rients infamous Carousing rules. This first section of the booklet is 26 pages long and does a job job of giving the DM a feel for the city and how it actually work. The tables and so on are just supplemental to this feel. Once you have it you could probably run the town without ever looking at the book again. The second section consist of 40 or so pages and details 70 or places of interest and business in town. Most of these are fairly typical and not very noteworthy but a few gems stand out. There is, for example, a talented and poor woodcarver who hates his wealthy rival and gets charity jobs from a nearby business, which he feels is beneath him. These sorts of interrelated personalities and businesses are the exception though. Most of the entries either have a normal business or some unusual character in them, perhaps with an adventure hook. Still, there’s more then enough of the unusual to keep the town hopping but not enough to turn it in to a farce. There are a couple of magic shops, but they are designed to be easily removed. There’s a small included adventure in the back that I would probably ignore. There’s one major cross-business organization detailed in the book, a kind of mob-like organization, and the adventure destroys that organization and its leader.

I suspect its best if that happen naturally during play rather than being introduced as an explicit adventure, especially since it can add so much color to the town as an ongoing home base. It should be fairly easy to lift the entire place and place it next to Stonehell of The Darkness Beneath if you’d like a more extensive town for the players in those settings. I’m likely to steal the ‘feel’ of the town and many of the businesses and personalities for inclusion in my own town. From that angle, it’s a great supplement.