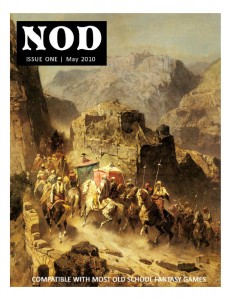 In this first issue of NOD, you can explore the Wyvern Coast, a sandbox hexcrawl with over 190 encounters. There are six new classes, three new races, a random village generator, a dozen new deities, new monsters, and more! Compatible with most Old School game systems.

I’m still working my way through odds & ends, biding my time till GenCon later this week. Nod is a bimonthly magazine put out by John Stater. John is a very busy man with a blog, Nod magazine, His Hex Crawls from Frog God, his Blood & Treasure game, and seemingly about twelve other major projects. He puts out a large amount of content and his hex crawls are top notch. And you’ll find A LOT of hex crawls in Nod magazine.

Let’s use the first issue as an example. The magazine is about 85 pages long and about 59 pages of that is the hex crawl. The rest of the magazine is devoted to odds & ends that seemingly support the hex crawl. There might be a small article on the gods of Nod, or another one that expands on the races of centaurs and mechanical men, both found in the hex crawl. Issue one has a random village generator and a bestiary unrelated to the main hex crawl. You might also find a new character class or two or a supporting NPC character class. Warrior-men with sub-classes or Wise Women NPC classes make an appearance in issue one.

The hex crawl is the main attraction here. I count 192 hexes detailed from two 8.5×11 maps that are roughly 40 hexes by 25 hexes, one of which is mostly water. This is an INSANE amount of content. The hexes range from a paragraph to several columns. Lionweres, hydrothermal smithies, undersea domes, structures on reefs, villages, palaces … there’s so much here that’s it’s hard to get a grasp on it. The Green Maiden resides in a crumbling castle, cursed to immortality by her cruel father who haunts the forest around the castle. SHe will offer anything to a handsome adventurer to help her break the curse. Of course she’s a kelpie who’s actually luring people to their doom … AWESOME! Classic fairy tale AND killer D&D encounter! The standard treasure is pretty mundane and boring but the magical items are pretty cool. Found atop a stone cairn is a crystalized skull. Holding it fills your mind with dazzling imagery and wondrous song, the holder feels more confident and gets the benefit of a Bless spell. They also find it impossible to concentrate, find hidden things, or cast spells. ATTENTION READERS: THIS IS A GOOD MAGIC ITEM. It’s got a history (cursed Don Juan-ish bard), it’s effects are described, it’s strange and wondrous and has drawbacks. That magic item goes to 11!

Every issue is like this. It’s like getting a terrific sandbox area, or adventure plot generator, along with supplemental material and unrelated material, all for something like $9.50, in print, or $3.00, PDF. This is a crazy good value. If there’s a problem then it’s with the print version and the maps. They don’t reproduce well and I suspect the full PDF has a full color version that comes out much better. Both version would benefit from a DOT or other object in the hexes that have more detail.

Nod is very very good. If you’re a DM with a half a brain for improvising then you should be able to find more than enough in even one issue to keep your gaming going for months if not YEARS at a time. It may be the best value in fantasy gaming and is consistently of very high quality … which I’ll define as whimsical, imaginative, and inventive.