DCC50 – Vault of the Iron Overlord 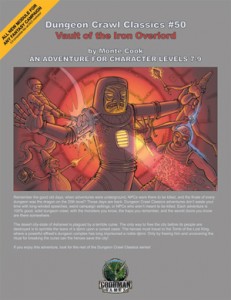 Chaos reigns in the kingdom as the king and queen have died, leaving no heirs. The heroes are commissioned to go into the king’s vault to retrieve the scepter of succession, a magical relic that legends claim to be able to determine who should be the rightful ruler of the kingdom. The king kept his treasures in no ordinary vault, however. The so-called Vault of Rings was designed to not only keep out thieves but to train his heir, who would be unable to access the kingdom’s wealth until he or she could overcome the trials and obstacles found within the vault…

I’m a sucker for a gimmick and this babies got one. First, the gimmick, which is the ONLY reason I bought this. The titular vault is circular and is made up of four concentric rings. The inside three rings all rotate independently of each other. It’s very similar to a combat wheel or the Faster Money Turn Tracker. The rings rotate and the characters have to line up the doors to make their way from the outer ring to the inner one. LOVE IT!

Unfortunately just about every thing else in this adventure is a big stinking pile of the usual 3/3.5 design mashed up with a 1st edition tournament module … a funhouse one at that. Linear design, monsters attacking on sight, giant lengthy stat blocks, absurdly forced explanations; it’s all present. King & Queen Dipshit spent a fortune on a proving and testing ground for the heir to the kingdom and then died without children. And therein, gentle readers to find the original sin: a testing & proving ground. IE: Lazy Designer Syndrome. “I want to throw together a bunch of shit that doesn’t make sense and a bunch of absurd situations … I got it! It’s a test for the heir!”

Most rooms have a trap, a monster, and/or an activator which moves the rings a number of steps clockwise or counter-clockwise. The party has to activate the correct buttons/levels in order to get the doors to the next ring to line up. There are some clues scattered around but that doesn’t really matter since the party is just going to kill everything anyway … because that’s the way the module is set up. The first ring is completely linear; the party works their way around the ring encountering monsters and traps. Eventually everything will be dead/avoided and the party can experiment with the buttons. There’s a token wandering monster table of derro, a unique Xorn, and the Iron Overlord to keep the party moving, but that’s mostly ineffective. The rooms are a combination of Grimtooth and Jr High design. The first monster is a Gorgon that is trained to stand perfectly still on a pedestal until someone enters the room. I am not amused. All of the creature encounters fall in to that same category. Something captured by the Iron Overlord and now living in the dungeon, fed by the derro and Xorn, which, while hating their servitude, attack immediately on sight. This is all exacerbated by the fact that the dungeon has recently been invaded by two other adventuring parties with one person still alive. Somehow these other parties have avoided the traps and monsters. Well, that and the fact that the derro and Xorn have reset all of the traps, cleaned up the bodies and restocked many of the monsters. We should also not forget that the party is forced to visit almost all of the rooms because of the linear nature of the place. Creative thinking is not encouraged: the interior rings have poison gas in them that is magically negated by solving the locking puzzle of the ring you are on and the walls between the rings are full of lead and iron walls to negate spells. Look, I know you want the party to experience the magnificence of your adventure EXACTLY the way you planned for them to, but if you can’t think of another way to handle things then maybe you write the thing for lower level characters?

And then there are the skill checks. An overly large number of things in the adventure rely on skill checks by the party … especially knowledge checks. Didn’t make your DC20 Knowledge(Nobility) check? Tough luck kiddo. Time to trek out of the dungeon and find a local expert to help you out. Hiring help is a time honored D&D tradition, although it usually takes the form of men-at-arms. Getting the Sage to go IN to the dungeon with you will be an entirely different kind of hiring process. Make you knowledge check or make your search check or be prevented from advancing. This is NOT the way to use skills. If the characters must succeed in a check in order to complete the adventure then you’ve written the adventure incorrectly. Blocking on a failed search check is a problem, especially since you can’t prove a negative and thus can never be sure you were actually SUPPOSED to search or if you rolled high enough. Or any of a dozen different examples. It’s a tax system. Did you spend enough points in Know(Nobility)? No? Then no further adventure for you. In the next adventure it might be swimming, or some other bullshit thing. It’s poor design.

The treasure sucks. The magic items are all generic book items and the mundane treasure is too little and too far between. The royal treasury in the middle has about 5000gp. There are a couple of gold leaf and gem inlay things that can be scrapped off and looted by they are only worth about 10gp or so. This is not a reward for a creative play, it’s a punishment.

The main villain, the Iron Overlord, is a bit interesting. The party is going to fight and kill him three times in the adventure. He’s a body within a shell within a shell. Kill the outer shell in the first ring and the second shell pops out and teleports away. Kill the second shell in the second ring and the third body pops out and teleports away. It’s gimmicky but it DOES at least foreshadow the villain and set the party up actually hate and fear him. It’s also a pretty lame way of taking away a parties kill.

1 Response to DCC50 – Vault of the Iron Overlord