A6 – Of Banishment & Blight 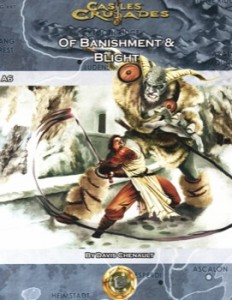 This is a castles & Crusades adventure module. although it can easily be used with any pre-4E version of D&D.

An interesting concept overall. A dungeon in a frozen mountain ruled by a primordial entity who doesn’t really care, much, what happens to his supporters. There can be some tough decisions and interesting problems with a strong social twist in the middle of the combat.

I think we’re all aware that the gods made a couple of things before man. Dwarves, elves, ents and the like are the usual culprits. What about those entities that precede even the gods? Strangely, most trope doesn’t tend to cover this, except maybe the Greeks. In this adventure module the characters journey to a strange and fabulous place to seek out one of those entities, an elemental lord of frost, to ask a boon.

It appears that if your birthdate falls somewhere before “time begins” then you gain a certain perspective that others lack. That whole “1000 years of rule by the evil god Unklar” that just came to an end? That’s really just a bump. When you’re a primordial entity you just seem to care about other things. When Unklar come to power he cut a deal with the Frost Lord. He’d turn the world in to a long winter in exchange for the frost lord getting rid of things for him. That’s a good deal if you’re an evil god and you’re going to do those things anyway. Why piss off someone with UNMAKING runes? The Frost Lord also picked up some servants from the evil one. Unklar, the Dark Lord, hasn’t really been keeping up his end of the bargain since his downfall and banishment from this plane, so the Frost Lord is looking to make some changes to his retinue … if only the players knew that …

There are a couple of hooks to get the party in to the adventure. The most logical are the continuation of module A5, however the Frost Lord can UNMAKE anything, so any quest to get rid of something could be appropriate. The Frost Lord has a small village around his mountain. It’s full of people who are now immortal, as long as they stay within about a mile of the mountain lair. Most of them have been there a VERY long time and they, like the frost lord, have developed a certain perspective. They just don’t care about most of anything. The path up the unnaturally cold mountain takes the party past a gatehouse and seven guard towers. Each tower leads to a different portion of the mountain lair, and they all eventually interconnect. There are probably about 60 or so rooms scattered through the various areas.

The occupants fall in to three  general categories. First there’s the goblin servants. Wimpy and weak, they do a lot of running away. Second are the ogres and minor demons. These guys are evil and were sent here by the evil god to serve the Frost Lord. They serve in the roll of ‘Murderous Denizens bent on killing the party.’ Finally there are the long-term residents. These are the closest things the frost lord has to friends and have been with him since before the 1000 year reign of the evil god Unklar. These take the form of monsters, a naga, hag, rhemoraz, and ancient white dragon, however they are not immediately hostile. The Frost Lord doesn’t care about much anymore. You can kill his servents. You can take pretty much anything you want. You can even mess up his house (which his brother, the rock lord, made for him.) But man does he get pissed off if you killed his friends. This is a bit of a test of restraint for the party. Kill the dragon the treasure pile or ignore it? Is that a yawn or is the rhemoraz about to eat us? This situation is perfectly illustrated in one particular encounter. An ogre lord and naga queen are sitting in a dining room after dinner, talking. The Frost Lord just left, noting to both of them that change was in the air. The ogre knows this means he’s on the way out and the naga knows she’s not going anywhere. And … SCENE!

This is mostly a straight up exploratory dungeon and hack in a cold environment. There are a large number of empty rooms and the enemies are pretty much all ogres, demons (of a certain type) and winter wolves.  The number of weird and unusual elements for the party to play with are quite limited … and mostly limited to figuring out that killing everyone they meet is not a good idea. The dungeon layout is unusual … think 10 or 12 towers, with one floor and 5 or some rooms each, all interconnected to a central tower with a couple more floors. It’s not very complex, but is is something I’ve not seen before. I wish there would have been some weird fantasy elements. This would have been the perfect place to showcase them since this guy has been around A LONG time.