A7 – Under the Despairing Stone 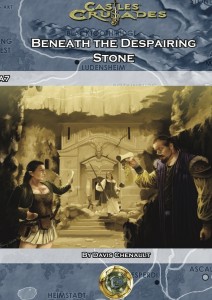 This is a Castles & crusades adventure module, although it can easily be used with any pre-4E version of D&D.

This is a guardian/running the gauntlet module with four set pieces. The encounters are with four different demons, being well done and interesting. It’s also quite short and rather bland overall, except for the demons. It’s too contrived for me to use it, although the demons really are well done.

When The Evil One came to rule he found one of his so called peers hanging around. This “peer” pissed him off so The Evil One tricked him and had him locked up in an extra-dimensional prison. He set four demons in the prison as guards. Each day the demons each play their magical instruments in order to keep their charge locked away. The players need to bust in and keep the demons from playing. Theoretically, this can can be done in a method other than slaughtering them, although in reality these four guys do seem unusually committed to their eternal task. Hacking them is going to be rough, they get resurrected automatically every 48 hours. Oh, and the prison is on another plane, so once the payers go in they can’t get back out again without freeing the prisoner. While I like the world, this is all a bit too much contrivance for my tastes.

The prison complex is located under a giant floating rock and has about 18 keyed locations. It’s really just a symmetrical dungeon with four creatures in it, the demons. I really don’t like these sorts of maps. Yes, I know it was purpose built to house the prisoner, but still, I don’t like it. It may make sense, however this is an environment in which people throw giant fireballs from their hands … it doesn’t HAVE to make sense. In fact, a major portion of the fun is derived from it not making sense. The place has four objectives, the demons, and each demon has a small suite of rooms. This being a running-the-gauntlet type module, all four objectives must be achieved before the players win. The map is not LITERALLY linear however it might as well be.

Those four objectives ARE interesting. The demons are unique, both in form and in personality. They live in some nicely atmospheric environments, the like of which are seldom seen. There are WAY too many words used to describe their environments, however these four guys could never be considered dull. I shall describe but one to give you all a taste. Charlie is a demon. He’s always growing these mutant apendiges: a new arm over there, a new spleen over there, and so on. He’s an oozing, gooey mess. He’s also an intellectual who likes to read. He has his imps continually making new comfy chairs for him to sit in so he can enjoy sitting around for all eternity lounging and reading his books. He’s searching for the perfect comfy chair design, unfortunately his propensity to grow new random appendages in random places makes this difficult. As soon as he gets a new chair constructed that’s nice, and can hold his bulk, a new appendage will grow and cause him to have to construct a new chair. His chambers are covered with bloody goo and the remains of his limbs which have dropped off. The other three guys are just as interesting.

This module feels more like a 4E module than any other I’ve seen. “Here are four encounters.  Kill them and move on.” The rooms do have a few features to mess around with: a drinking horn, magic dust, and vials of goo/liquid/etc. Those are nice elements however they can’t by themselves make up for the sparseness and linearity of the adventure. It’s too brief, too spartan, and at the same time too verbose, using many many words to get to the same four encounters.