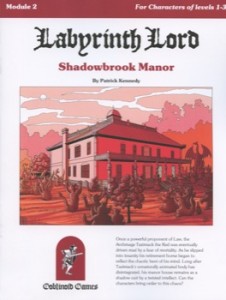 This is a wonderful OSR product that hits most of what I’m looking for in a product. It would be a great introduction to the OSR for new players.

The Archmage Tazimack the Red is dead. Once a force for Good and Law, he went insane searching for immortality. Now the party must enter his manor and bring order to the chaos they find within!

Now THIS is an OSR module. It hits almost every single thing I’m looking for in a product. No surprise there since it comes from Goblinoid Games, the fine folks who bring us the Labyrinth Lord retro-clone. They are certainly keeping the spirit of the OSR alive in this product.

We start off with half a page of backstory and introduction. This is generally right at the limit of what I want to see. Just a brief introduction to what’s going on and why without any epic backstory to muddle things up. This section includes a small introduction which includes warnings about the play style for those not versed in the OSR: Some encounters will kill the players if they wade in hacking. This puppy wasn’t written so your fighter could gain a level and get that +3 flame-tongue bastard sword you’ve been dropping hints about for the last month. The weakest portion of the introduction are the hooks. These range from the characters being repo men, to an inheritance, to amnesia, to ‘you just stumbled upon it.’ As with many old school products, it’s up to the DM to get the characters hooked; the module just exists.

Given the lack of fleshed-out hooks there’s no starting base, no wilderness adventure and no rumor table. The later is a shame; it would have fit in very well with the overall flavor of the adventure. I don’t really care about a starting base either, although I do like to see a small section about the wilderness surrounding an area; the players are generally going to try and camp and make repeated forays in to a complex, so the surrounding countryside is usually appropriate. The wandering monster table for the manors grounds and interior are suitably nice. They include a variety of the residents of the manor, going about their business, as well as a couple of other freaky things, like an broom of animated attack that sweeps the house. The exterior table have some animals on them, a werewolf, and goblins, besides the manor residents. I could have done without the goblins, and I would have preferred to have the residents and animals up to something, but it is a much better than most.

The manor has two main floors, along with a small attic and basement. The maps are very nice an non-linear. For the most part they involve corridors with doors to rooms branching off. As such the party is not really forced to explore any of the manors rooms; there’s always another door to open. There are about 45 keyed encounters IN SIX PAGES. Yes, Six pages. Further, the monster stats are included in the room  descriptions, and almost every room has something strange or interesting in it. That is some serious editing folks. The second half of the module is devoted to the maps, new monsters, and new magic items. Since there are really only 12 pages it’s shocking just how much good stuff is in this. There are several new monsters for the party to face as well as six or so new magic items to puzzle out. And that’s not counting the twisted items, such as magical sword without plusses and so on. ALmost every single magic item in the module is new or different in some way. This is WONDERFUL. That keeps the spirit of exploration and adventure alive. That cloak or sword could do ANYTHING. And that new monster? That’s not in any monster manual … run away!

The various encounters almost all have something interesting and unusual going on. A gallery who’s paintings have magical effects, a doorway that is always JUST out of reach, a summoning room with a slightly off-kilter circle, brains floating in jars in the laboratory, a banshee librarian and bodies in bathtubs. There is A LOT going on in this module. The party will be able to poke, prod, explore, and get in to trouble till their hearts content. I LOVE that sort of thing. The more non-standard a room, a monster, and encounter, or an item then the more I like it. A large part of the OSR game is about imagination and exploration, and this product fits that to a T.