BB1 – The Pearl of Pirates’ Cove 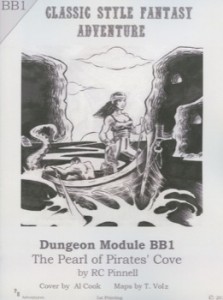 An old pirate lair in sea saves. The map design, while making sense, is not very interesting, and there’s not enough strange to explore. The detail comes in all the wrong places. It’s a stocking exercise, similar to B1.

Arrrrrrr! Pirates! Treasure! Ghosts! Curses! All this and more awaits as you explore the rumors of The Pearl of Pirates’ Cove.

This module is arranged much in the same way that B1 – In Search of the Unknown was. Each chamber in a group of sea caves has a short description followed by a blank space to write in a monster and a treasure. A table in the back of the booklet provides a list of monsters and treasures for the aspiring DM to populate the rooms with. 15 treasures and 20 monsters are provided to populate the 39 rooms of the sea caves. But … I get ahead of myself.

The module starts with a two full  pages of background and introductions. The background in particular, at a full page, is a little longer than I would have liked to have seen. This being a sort of introductory work, a full page is given on stocking the dungeon with treasures and monsters, along with a few words of advice, such as noting that there are more rooms than monsters and treasures … on purpose. Not every room should have a monster, not every treasure should be guarded, and there should be a lot of nothing in dungeons, so I heartily approve. There’s a small ten entry rumor table, which I always appreciate seeing in a module, and the rumors are better than most. There’s a lot of half-truthes and a few truly useful entries.

The dungeon centers around a group of sea caves in a cove, once the abode of the dread pirate Sally Golightly. Like I said, there’s an longish backstory there …   The sea caves are a chore just to get to; the party will need to rope down from above or climb up from boats below. That’s very nice. It presents a nice challenge to even get to the caves, especially for a low-level party, and provides a reason why they still have not been looted. There are a couple of false cave complexes as well, one of four chambers and one of seven chambers, which should provide a note note of realism … not all dungeons have bright neon welcome signs pointing to the doors. The pirates caves on the upper level have a design that resembles a long corridor with chambers/rooms/doors branching off of it, with a couple of chambers having a second exit. The lower level, where the loot is hidden, is a linear affair of the ‘run the gauntlet’ type: room after room of traps & encounters until you reach the treasure chamber. That makes sense, even though it’s not the design looping and extensive map design I’m usually looking for. There’s a small wandering monster table of six entries which consist of vermin and animals. I like those types of encounters on a wandering table, however a certain Ghost, that of a pirate, is missing from it, which detracts a bit.

The various encounters are on the bland side. The rooms of the upper chambers especially so. Each room tends to be described by what use the pirates had for it and what went on in the room, sometimes with a suggestion of what sort of monster could be placed. “There are many nests apparent” and so on. This is, IMHO, the wrong way to describe a room. I don’t care about the normal contents of the bedroom, even _I_ can make that up. I want new, unusual, strange, and weird to be described. The upper chambers have nothing interesting going on. Nothing strange, unusual, or weird at all. The linear lower chambers are more interesting. A log over a rushing stream. A giant stone face with hollow eyes, several traps, from pits to a homage to the first sequence of the first Indiana Jones movie. I’m a sucker for giant rolling stones. There is a chessboard puzzle in the lower halls, which seems out of place. I would expect to see that in some kind of funhouse dungeon and not in something that is attempting to se a bit more serious. It is, however, a classic puzzle type.

The existence of the lower halls, and the traps, are alluded to in the upper caves by clues that party can find. I like that; the players are rewarded for exploring. I seem to recall that B1 had several rooms already populated by monsters & treasures, as an example for the DM prior to the DM stocking the rest of the dungeon. This module lacks that and could use it if it were aiming to be an introductory product.