Hidden Hand of the Horla 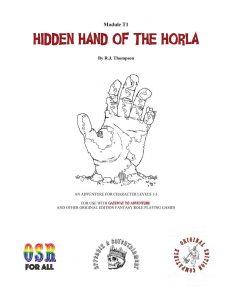 Legends tell of the Hand Mage’s Tower that once stood at the edge of the realm. Within the Hand Mage experimented and hoarded his magical treasures. The tower stood for many years until one day it mysteriously vanished. Rumors spread that the mage had offended the gods and had been eradicated from existence, or else had made a pact with a demon prince and was now paying his due. Whatever the case, the tales became legend and all but the oldest elves were unsure if the tower had ever existed at all. Now the tower has reappeared where it once stood. Will you dare to enter the ancient tower in search of riches and magical secrets?

This twenty two page adventure describes a fourteen room wizards town in the shape of a hand. Only about five pages have room descriptions, the rest being background, new spells, monsters, etc. It’s pretty basic. Goat-people are a highlight, but not even they can save it from its mundanity.

Single column. Have I ever reviewed a single column adventure that was good? I don’t recall doing so. I doubt it. It’s certainly possible, but I think folks using single column generally out themselves as someone who doesn’t really understand the adventure format. As always, we’re after usability at the table, and single column doesn’t lend itself to that. And see one footprint in the mud usually means there’s a trail of misinformed decisions.

Mostly, the adventure is just not that interesting. Yes, it’s 2018, and we’ve now seen many decades of adventures. This isn’t just the same old nothing new under the sun. Tropes and standard adventures can be enjoyable, even if the idea has been done a thousand times before. But it does need to bring some quality to the table. Thus “not interesting” doesn’t mean that it’s just the same thing we’ve seen before, but rather it’s the same slightly GENERIC thing we’ve seen before. Vanilla isn’t bad but generic is boring. And that’s what we have here, mostly.

It’s a kitchen with a rust monster. Environments that are just “a dining room with a table and chairs and a painting” or a wizards bedroom with a bed and table and drawers. This is not interesting. The writing is not evocative AT ALL and that is, after all, a major part of being useful at the table and adding value. It’s got to be scannable and it has to make you visualize it. That’s why adjectives and adverbs exist. And there’s just nothing here. A room, generically described. The kitchen tells us that there is a counter on the east wall. It’s irrelevant. The writing is boring.

There’s also come pretty heavy misses in added resources for the DM. We’re told in the beginning that there are some doors up high in the crumbling tower to get in, but offered no further advice about it. I guess we can rely on the rules for climbing, but it’s a serious miss to present something idiosyncratic for those wanting access.

Likewise we’re told, in the meat of the room three description, that you can hear the creature while you are in room one. Well … isn’t that really something for the roo mone description? I’m a good DM, but not a precog. 🙂 You have to put information where the DM will find it.

This is Pay What You Want at DriveThru, with a current suggested price of $0. The preview is siz pages, and the adventure free. Taking a look at the last page of the preview you can see one of the middle-length rooms, room one, and the kind of generic description and “all over the place” formatting in one paragraph. Important things first, details in separate paragraphs!https://www.drivethrurpg.com/product/253499/Hidden-Hand-of-the-Horla?affiliate_id=1892600

6 Responses to Hidden Hand of the Horla