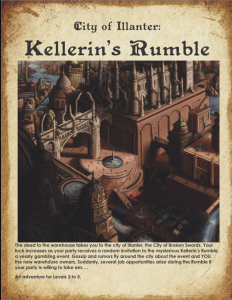 Congratulations!! Someone in your party won/found/bequeathed a deed to a warehouse inside the protective walls of Illanter, City of Broken Swords. Another bonus, while visiting said warehouse, you are invited to the mysterious Kellerin’s Rumble, an annual gambling event. Your group is the talk of the town! Gossip and rumors are flying around the city about the event….and YOU. Let the games begin!

This 27 page adventure describes a warehouse, sewers, and manor located in a small city. It’s centered around the manor, an invitation to gamble there, and several side quests. It’s organized well, is easy to scan, and has A LOT going on in it. It feels like a lot of the encounters can lead to other things … leaving everything feeling full of potential and hooks and things to follow up on. It ain’t gonna change your life, but it is certainly a very high level of quality with lots of potential for fun … and that’s what I’m usually looking for. I wish every adventure were at least this good. Also: I REALLY like city adventures and this is that, so, I’m predisposed to gush.

You get the deed to the warehouse, and the sewers have several connections, with short city-life events/NPC’s thrown in to add some color. Several potential hooks pop up, all meant to get you in to the manor and poking around. I get the overall feeling that a lot of of the encounters lead to something else. There’s a leper in the sewers being eaten by a blob which can turn in to an NPC. There’s a ship captain being dunked in the water by his crew because he owes them money. Who ya gonna side with? The main manor dude wears a ring that looks like a ring someone may have contacted the party over …

You know, there was this Nike “Just Do It” commercial once. It showed various scenes, over and over, in quick cuts, of people getting ready to do things. Runners on the line rearing up right before the gun went off. Swimmers getting in to their positions moments before they dove in. Things like that. Moments captured right before the action started … but never showing the action. That’s what this feels like. So many of the encounters feel like “Oh man! It’s about to go down!” But in a “set piece” kind of way. Friends or foes to make, no right or wrong choices, just situations that pop up in front of the party. Inciting action … over and over again. It makes the thing feel packed and ALIVE. Which is exactly the fuck how a city is supposed to feel.

For each location you get a short little description, a couple of sentences, and then a few bullets pointing out obvious stuff. It’s a great format to use, easy to scan. The descriptions generally tend to be punchy … not teeming with evocativeness but certainly a cut above and not bad. The bullets concentrate on important things. Treasure, traps, potentials for getting in to trouble, etc. It’s not trivia. It’s things that are important to the players. LUV.

There’s rando NPC tables for the town, there’s a NPC summary sheet for the other gamblers at the party. The maps are interesting. There are important things mentioned, like ow often guard patrols pass a certain point in the manor home. RELEVANT. There’s this little section on a wish that doesn’t allow you to talk about what’s going on inside the house once you leave. Even that’s handled well, with various methods to circumvent it that are NOT another wish.

I could mention a few negative things. Primarily, I feel like this thing is missing maybe two more paragraphs of text. One an overview of the adventure proper. What’s missing is “the party gets a deed to a warehouse to get tem in to the city and invested, and there’s fun stuff inside to make the first visit a good time, The sewers connect points A&B and are natural. The main adventure point is the manor house gambling, which A, B, and C tie in to.”

The second is something more about ‘the house at rest.” Windows & roof fun, more guard paths, a little more on sound travel, and roleplaying “ought oh were caught!” bluffs. There’s a bit of this, but feels a more ad-hoc and it needs some more concrete overview.

I saw this was an example product of what you get when you Patreon Malrex. “Ug, here comes the shit …” I thought. Oh, how wrong I was! Also, man, a fuck ton of lepers in this city! Didn’t I review another one like that at some point?

This is Pay What You Want at DriveThru, with a current suggested price of $5. The level is on the cover but not in the product description (Naughty!) The oreview is eight pages. You can see a rando NPC table, with short NPC descriptions, and the entirety of the warehouse and sewer descriptions. There’s also the additional hook stuff before the warehouse and the lack of the overview can be seen.Note warehouse rooms two and eleven!
https://www.drivethrurpg.com/product/250834/City-of-Illanter-Kellerins-Rumble?affiliate_id=1892600