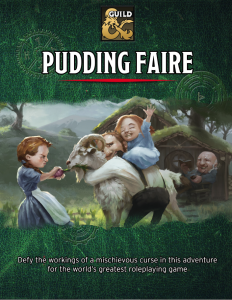 This 24 page adventure deals a time loop ala Groundhogs Day, with a halfling and gnome god poking at each other. Not a total shit show and better than average, it looks like either it was actually playtested or some serious thought went in to organization, or both. Long but not really overly verbose, it handles “time travel contingencies” about as well as it can. It is non-trivial, but the overlapping events seems like a lot of fun.

Halfling goddess won’t let the (evil) gnome god of trickery join in the pudding eating at a local halfling/gone fair they are both attending, so he curses the village to relive the same day, while he tries to convince her each day to let him try the pudding. Solutions are to help her by keeping him from casting the curse, or convince her to let him also eat the pudding.

Bonus points for Gods. Modern D&D relies too much on piling kits on monsters to communicate the fantastic and not enough on the old folklore elements … and mixing it up with gods could be either folklorish or S&S/DCC-ish, depending on their treatment. It does a good job of handling the gods, covering blasting players with spells and why they don’t, etc. It supports the DM covering this as well as farming XP, gold, etc. “These are unusual situations, let’s give the DM a couple of words of advice on each.” That’s good work.

And that extends to other areas of support the adventure offers the DM. There’s a decent amount of advice about running the time travel elements that doesn’t get too in the weeds. Guidelines that get in and out fast. Then there’s a nice one-page summary at the end that has NPC’s, the problems/situations they face, along with a little personality and a location. That’s GREAT to see. It’s a perfect example of the designer including support material for the DM based on the idiosyncratic needs of the adventure they’ve written. Be it from playtesting or otherwise the support material thoughtfulness and advice shines through.

There’s about two dozen locations in the adventure. Each has a little description, some have a key event that happens at a certain time each day. Some have a little situation that happens the first day but not other days, and other have events that happen in response to other events and/or the parties actions.

That, in a nutshell, is the problem with these time travel adventures. They have to account for the initial situation as well as the parties, and other NPC”s meddling in things. That can make for some long descriptions. These are not necessarily verbose, but the pure volume of events makes the description drag out. They COULD be shorter, with some really dedicated editing. And the headings could be much better. Right now there’s a “Significant Event” heading for those locations that have one. It would have been better to use more descriptive headings, like “SI: Mayor Turned in to a Toad” or some such. While the SI heading provides you the ability to find the SI section easily, you want to overload the data when possible to cue and orient the DM. The same goes for the other events headings. Further, there could be some bolding or better use of bullet points. The ability to scan the text quickly is important. If we assume the DM has read it once, then at the table we’re looking to job their memory … which bolding and bullet points can do well … and which this adventure does not do well.

It does a decent job with presenting some nuanced NPC’s … in some cases. There’s a thief to redeem … but also a gang of outlaws that can’t be reasoned with. You can help either god to break the curse, but the good god is clearly MUCH easier. The adventure even goes so far as to say the outlaws will never help the good guys and it should be VERY hard for the players to convince the good god to allow the evil one to eat some pudding.

I’ve got some problems with that. The adventure does a good enough job of being open ended that these discrepancies stand out. I remember a Deus Ex game in which you complete without violence … except for this one farmed-out boss battle that you had to fight. The outlaw gang stands out here. They have a mortally injured member and go so far as to kidnap an herbalist to save them … and its even mentioned that only divine magic can save him. But they will never side with the good god. Not even if she promises to save their buddy? And the whole good good good god pudding thing is kid of lame also. Gods has a historical basis in kind of getting along, even when they don’t like each other. Is it really so much to ask that the gnome god be allowed to partake in the pudding feast?

That accompanies some bad advice in places, like “throwing some skulks at the party when things are lagging.” That’s never a good idea.

But, still in all, much better than I was expecting. I was prepared to make a disparaging remark about the Adept level DMSguild stuff, having encountered at least one stinker, but so far I’m two for three for them not being total shitshows. That’s MUCH higher than usual for me, and ridiculous when considering the depths of despair general DMSGuild adventures send me to. It actually MIGHT be worth checking them out! I’ve also decided I’m grading this 5e/Pathfinder shit on a curve from now on.

This is $5 at DMSGuild. The fucking preview doesn’t fucking work!
https://www.dmsguild.com/product/249757/Pudding-Faire