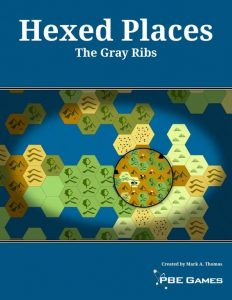 Hexed Places are outdoor locations and encounters based on the classic six-mile hex format and OSR sensibilities. Use these locales as a quick side adventure, to fill out your campaign sandbox, or expand upon them to create a multi-session campaign. Each includes an overview of the region, expanded one-mile per hex maps for players and GMs (PDF and VTT format), encounter and rumor tables, and descriptions of individual locations, encounters, and features within the hex. Files are available for individual download and as a single zip file. … This Hexed Places locale is mountainous and rugged, with a few patches of woods and hills. The Bugbears of Stoneroot Village trade iron, coal, and silver for the slaves needed to work Dragor’s Mine.

Well, that was a fucking waste.

This fourteen page hex crawl contains a 9×7 hex map from hexographer, with a 1 mile per hex scale, with six of the hexes expanded upon. And by “expanded upon” I mean “minimal description expanded in to minimal longer description. Minimal expansion is a bane.

There’s not much to this. A players map, a DM’s map, and twelve pages of text, two of which are wanderers and two of which contain hex details. The descriptions are minimally expansive.

Minimally expansive is where you take a short description and then make it longer without really adding anything of value. I usually bitch about this in dungeon rooms that exhaustively describe a mundane bedroom and list its contents. The key to this style is to not add anything of value to actually running the adventure.

Let’s take a hex crawl; we’ll use Wilderlands as a kind of platonic example. Wilderlands might say something like “A tribe of dwarves buys slaves to mine gold.” They are always on the lookout for new workers.” Wilderlands was good at embedding action. There was something in the description, usually, that was some kind of call to action and enabled interactivity. The dwarves want slaves, maybe they buy them and maybe they want to capture the party. Maybe they are greedy, as dwarves are want to be. The use of the word “workers” might imply some cornish american west gold miner/slave-in-all-but-name stuff. There’s enough for the DM to use context with the implied situation to build an interesting little interactive thing for the party to get in to trouble with. It was terse writing with lots of potential entry embedded in it. (I’m also romanticizing it a bit, I’m sure.)

Now, what if the Wilderlands description were longer? What if it named a few of the key dwarves, listed their treasure, and told us how many pickaxes their were and told us there were some twelve wooden buildings, like a smelter and an ore-processing place and a communal barracks. I think I can make a good argument that nothing of value has been added. It’s all either pretty obvious and doesn’t really add anything interactive or interesting.

That’s what this does. It expands a basic idea in to nothing. A generic cave hex has a chance for wandering monsters. Good thing that was told to us! The bugbear mining camp has a couple of names and the dozen wooden buildings/barracks detail, as well as a treasure list. There’s nothing to this.

Added value would be implied talking or tension, maybe a faction, some personality quirks. SOMETHING. One hex has a treant who hides unless the party fucks with the forest, and then it animates some trees. That’s not really much value. It’s not devoid, but, really, there’s nothing to that.

The two pages of wanderers are the same. No potential energy. The gnoll slavers are looking for slaves. Joy. I guess I should be happy they have the “slaver” descriptor, which is better than nothing But, really, it’s the added description I’m bitching about. There’s nothing there. Just pick a random adjective/adverb from the dictionary to add to some monster you picked out at rando and stick it in the adventure. Then describe what the adjective means.

Seriously, just grab a map and a random encounter generator online and you’ll have essentially the same content this provides.

There’s No Added Value beyond that.

Someday I’ll get around to producing a hex crawl guide. But, in the words of Theoden King, Not this day. Maybe in eight or so more years at my current rate of writing.

This is $3 at DriveThru. The preview shows you everything, so you can check out the hex descriptions for yourself easily enough.https://www.drivethrurpg.com/product/140291/Hexed-Places–The-Gray-Ribs?affiliate_id=1892600

4 Responses to The Gray Ribs