In the Depths of EldHeim 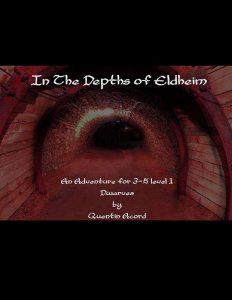 For generations the subterranean city of Eldheim was the eternal home of the Dwarves, until the faithful day spoke of in legend. Fyor Blackhand, who’s clan was responsible for mining precious ores from the deepest depths of the mountain uncovered an ancient evil. The Entity promised him power in exchange for his service and that of his clan. Blackhand agreed, and in doing so became the first of the betrayers (called Duergar in the Dwarven Tongue).

My reviewing life is frequently a living hell.

This fifteen page pointcrawl has ten essentially linear locations. Forced fights, single column, lots of italic read-aloud, with a style that is more Storgame than OSR.

I know I take shit sometimes for my taxonomy. Yeah, sure, it’s OSR if you say its OSR. Meanwhile, those of us spending money on the shit want some expectation of confidence in what they are buying. If I buy something with “OSR” on it and it turns out to be a one page Fiasco playset of London gangsters, well … You can expect me to be upset.

I know the lines are not always as clearcut. If you stat something for OD&D, did you just write an OSR adventure, no matter its similarity to London Gangster playsets? Maybe you wrote a D&D adventure (and therefore an OSR adventure …) but it’s just a REALLY REALLY bad adventure. Maybe?

Anyway, this adventure shows little understanding of how D&D works, especially older styles of play. Everyone is a level 1 dwarf and you’re sent in to the ancestral home to find a kidnapped dwarf prince. You’ve got a hidden stat, Honor, which means that someone will “win” (get to the kings heir) based on an accidental following of what the designer thinks is honorable.

Tear down evil banners, get some honor. Loot centuries old abandoned market stalls? Loose honor. Unless their your clans, then no honor gain or loss. This is shit.

First, you can’t assume. Even in 2018 it’s not fucking clear what good and evil and right and wrong is. Peter Singer says you’re shit for drinking anything other than water and donating the savings to helping unfortunate people around the world. -1 Honor for drinking the coffee! Second, that kind of mechanic only works if the choice is meaningful. Meaning that the players have to understand the consequences of their choices. “You want to tear them down? That’s an honorable act … do you want to?” or “Looting the stalls could be seen as a dishonorable act, looting the dead. Do you want to? NOW the players have some choices to make and it is, after all, about them making choices for their characters. But that’s also kind of shit, right? I mean, if you tell them then they will (probably) game the system and only choose “good” action. That’s why there needs to be consequences. Sure, you can loot the Axe of the Dwarvish Lords from the old kings tomb … but there will be a massive honor cost … Now it’s a delicious choice. This adventure don’t do none of that. Just take your fucking lumps and move on. It’s shit, with no interesting choices or consequences.

Back to Ye Olde Fiasco playset, what’s your position on forced fights? D&D, early D&D, is fucking deadly as hell. Players needs to navigate risk v reward and all of that jazz. When you force a fight (in the second fucking room) you are forcing their hand. You are telling them that exploration, roleplaying, and everything else is secondary to tactics. Low and behold everyone min/maxes for combat and 4e shows up the day. It’s a fundamental lack of understanding about D&D. The same with treasure. Old D&D is a gold for XP system. This abstracts nearly all of the treasure. “If they loot the stalls they get treasure.” What treasure? Who knows! That’s up to the DM! Hey, I just paid you five fucking dollars, how about you lift your pinky or glance sideways as we pass Big Ben in order to provide some fucking value?

It’s all single column, which, as we all should know by now, is not easy to read and run at the table. THEN it makes us suffer through LONG read aloud. No one pays attention to long read aloud. Know why players are on their phones? THEY ARE BORED BY YOUR FUCKING GAME AND ITS READ ALOUD. And, it’s in italics. I fucking hate long sections of italics. It’s impossible to read and makes my head hurt. No, it’s not just me. It’s a readability/usability thing.

One rooms read aloud tells us that the forges has “a cooling station enchanted to never be empty and be full of blessed water.” Uh … how do we know that? Hey, how about a little interactivity? Lets the characters investigate, find out it nevers empties and is blessed? No? Just want to tell us everything inthe read-aloud? FUNDAMENTAL LACK OF UNDERSTANDING.

This is $5 at DriveThru. The last page of the adventure shows you the first three rooms, one of which isn’t even on the pointcrawl map. Enjoy the blessed water room.https://www.drivethrurpg.com/product/252878/In-The-Depths-Of-EldHeim?affiliate_id=1892600

3 Responses to In the Depths of EldHeim