Dungeons of the Dread Wyrm 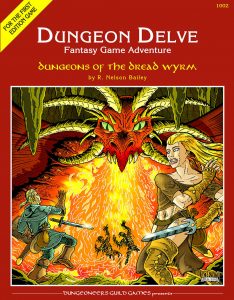 Rumors hint that below a barren crag in a forlorn range of hills lies the lair of the great dread wyrm, Felmurnuzza. This dragon has mercilessly terrorized and plundered the nearby civilized lands for hundreds of years. However, no one has seen her for many decades. Nonetheless, these kingdoms continue to pay the fell serpent tribute out of fear. Many now say that she sleeps that sleep of death — her legendary fabulous hoard unprotected and ripe for the taking. Of course, if the rumors of her death are not true, a grim death surely awaits those that seek to discover her treasures.

This 37 page adventure describes a linear three level dragon lair with 41 rooms. Am I the only one who groans every time I see a high level adventure? Here’s your recipe: gimp the characters, make it linear like Tomb of Horrors, stuff it full of death traps like Tomb of Horrors. This adventure follows the recipe.

But note that a dungeon is pretty explicit in its use of walls to channel and guide the party and limit their movement. Further, the environment is a “close” one, allowing for lots of room for hidden information, such as traps and other secrets. This is, essentially, WHY the party has all of those abilities. The challenge for the designer then becomes creating challenges for a party whose growth path was specifically designed to thwart the environment.

It seems like this almost inevitably leads to gimping the party. In essence, the designer refuses the challenge and instead just says “fuck you.” The walls are made of lead. Everyone wears rings of mind shielding. No teleports, or stone to mud, no ethereal, no scrying, no detect/divination spells. (This adventure even goes a step further and halves the thieves find & remove traps ability.) You got a room full of human fighters? Just say they are all immune to mind-control magic that way the party has to fight them!

This is a fundamental misunderstanding of what D&D actually IS and how it works. Is D&D, fundamentally, about tactical combat? It is certainly an element, at times, but I don’t think that’s what make it appealing. (And, on the other end of the spectrum, it’s not about storytelling, especially by the DM.) There’s an ad-hoc element to D&D that, I think, makes it appealing. A back and forth between the DM & players reacting to each other. It’s a human interactive game. There’s a part of me that wants to say that the more you can computerize your adventure, or THINK you can computerize it, the worse the adventure is. Note that this covers both tactical combat play styles as well as railroad plot game styles. I don’t exactly buy 100% in to this idea, but there’s an idea buried in there somewhere that appeals to me and I DO think is true.

Yeah, Gygax gimped people in adventures. From stupid +1 turn amulets in B2 to the Tomb or Horrors. Look man, I would have wanted to explore greyhawk dungeon with him DM’ing as much as the next player, but that doesn’t mean he was infallible. Far from it.

Either this should have been an adventure for lower level players that did not have as much “bypass” magic, or it should have been rewritten as something other than a dungeon. Yeah, it’s hard. That’s why there are not a lot of high level adventures and “domain play” is a thing.

This has got another problem. There’s a style of writing that obsesses over dimensions. Room two, we are told, is “… unadorned 30’ by 40’ room. A 9’ tall, 7’ wide, 9’ long statue of a dragon sits across the room from the entryway. The dragon is constructed of bronze and sits on a 1’-tall pedestal. It sits on its haunches with wings folded, its mouth hanging open menacingly.” Or, as a better adventure would say “a massive bronze statue of a roaring statue.” Who the fuck cares that it sits on a 1’ tall pedestal? Is that trivia relevant to the actual play? (Leading the witness by using the word trivia!) This shit stems from the mistaken belief that more is more. It confuses trivia, like dimensions, with providing a good description. You can never provide enough detail to turn a description in to something good. It can be hard to grasp, but its critical to embrace the less is more philosophy. By proving less you are allowing the DM’s imagination fill in the details. THEY can provide an infinite amount of detail to the scene, if need be. This allows the designer to focus their writing. The craft that very short description in something extremely evocative. That little description will jab like an icepick in the DM’s own brain/imagination. THAT’S the goal. Plus, it’s easier for the DM to scan and use during play. A more evocative description, that lets the DM’s imagination build on it, and as a consequence is also easy to scan during play.

Hey jackasses (IE: my devoted readers), don’t confuse this with minimalism. I’m beating the terse/evocative/scanability horse because 95% of adventures fall in to this trap. When “Room 1: 12 skeletons” adventures show up I’ll instead bitch that a random number generator doesn’t provide value. There’s a middle ground, and it’s not minimalism.

One more bitch. Rube Goldberg design. Explaining effects with mechanics that already exist. Put on a crown and get “teleported without error” to the abyss. IE: the magic mouth says a word that dispels a massmorph that summons a … It’s fucking D&D. Shit happens, you don’t need to explain why.

Fuck, no, sorry, another point. I like Grimtooth. I have fond memories of pouring over it as a young teen, along with my Battletech technical readouts. But it’s not a style to be emulated. “The pit has a cone shaped bottom so thieves can’t climb walls out” is both a bit of gimping and a bit of Grimtooth and A LOT of the traps have a Grimtooth element.

It did have a couple of nice hooks, like A Throne card from A Deck giving you the ruined castle that sits on top of the lair, or a captured spy revealing they were working for the dragon, or a prophecy about a certain group of heroes slaying a dragon when a star blazes during the day … hey … what’s that flaming orb up in the sky? I was also rather fond of a room whose walls were black glass scorched, with a big urn in the middle. The urn is full of wraiths and spectres, from the dragon torching the room of workmen. I would have made it wiggle a little and smoke a bit … the best trouble is the trouble the party gets in to of their own accords. 🙂

Anyway, just another Tomb of Horrors.

This is $10 at DriveThru. The preview is the first six pages, meaning it shows you nothing except the hooks and rumors on the last page. https://www.drivethrurpg.com/product/250989/Dungeons-of-the-Dread-Wyrm-DUNGEON-DELVE-2?affiliate_id=1892600

12 Responses to Dungeons of the Dread Wyrm