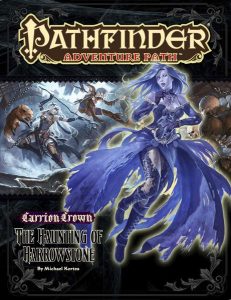 When Harrowstone Prison burned to the ground, prisoners, guards, and a host of vicious madmen met a terrifying end. In the years since, the nearby town of Ravengro has shunned the fire-scarred ruins, telling tales of unquiet spirits that wander abandoned cellblocks. But when a mysterious evil disturbs Harrowstone’s tenuous spiritual balance, a ghostly prison riot commences that threatens to consume the nearby village in madness and flames. Can the adventurers discover the secrets of Harrowstone and quell a rebellion of the dead? Or will they be the spirit-prison’s next inmates?

This is a ONE HUNDRED page adventure that describes a forty-ish room multi-level ruined prison full of ghosts, along with the nearby town and a few downtime events. The encounters are interesting and it has a ghostly vibe somewhere between The Haunted Mansion and creepy-as-fuck Inn of Lost Heroes … which makes it a better ghost adventure than most. The atmosphere and encounters are ruined, though, by the UTTERLY incomprehensible wall of text issues and lack of any sensible formatting. Rewritten in 20 pages this would be pretty decent but as is I don’t even think a highlighter could make it runnable.

I’m reviewing this old Pathfinder adventure from 2011 because my son is running it for his friends. He starts Purdue in a week and I’ll miss him, weakening my resolve when he suggested I review it.

“Welcome to You Are Doom” says Killface, the introductory chapter header. The first hint of trouble is when the writer poses the question “Can a hoor adventure also be a PATHFINDER adventure?” If you have to ask the question then you know what’s to come … trouble. And trouble it is, in the form of “let me explain EVERYTHING to you.”

This thing is one hundred pages long. The appendix starts on page 65, with the ten pages before that being the town. The dungeon starts on page 28, once the events, preamble,hook are done. That leaves about thirty five pages for forty rooms. Why use one word when eighteen will do? Why format your adventure using bullets, tabs, whitespace and bolding when instead you can bury the important bits inside all of those extra words? I’ll dump in a couple of example in the end, but it’s same history, padding, and other nonsense that most adventures fall into, making it unusable at the table.

What’s a shame here is that there is some good content buried in the muck. The town text is padded out to all hell and back, but mixed in there is GOLD. The mangy stray dog that is the town’s mascot. The chili cook-off/peasant wedding community center (bingo anyone?) But all of that is mixed in a lot of garbage. The town square has a gazebo and the dog and takes two long paragraphs to describe. Likewise the notice boards take about the same amount of space, if not more, and that’s without telling you what the notices are! The fucking general store takes the amount of space to say they don’t sell weapons or armor. FOCUS. Yes, a tidbit of detail is great if it helps makes the place memorable to the PC’s or impacts gameplay, but that’s a fucking TIDBIT, not a paragraph.

Oops, off track. Nice magic items like a Ouiji board, are ruined by a half column of text to describe them. A ghost has two pages of backstory inserted in to the main text. The opening dialogue punishes you for listening to it. You actually NEED to interrupt. How many times has a bad DM said to me “let me finish the dialogue”? ENough for me that I just let them finish it. It’s like asking people for attack rolls and then punishing them for doing it.

The opening scene is a great example of the agony of this adventure. You’re pallbearers carrying a casket. Locals show up to start trouble. If you put the casket down the dialogue ends and combat starts. There’s are chances to drop the coffin, spilling the body (Yeah! Cool!) The locals attack with weapons … but to subdue. Killing them REALLY fucks you over in town. They steal the body if you drop the casket. (Nice!) All of the cool things are ruined by punishing the PC’s for the set up the designer is giving them. “READ MY MIND” he seems to be saying. That’s not good design. Columns of read-aloud, mountains of DM text unorganized, shitty design … it all hides a potential combat while carrying a casket, dropping the body and the locals running away with it. That’s GOLD. But it has to be ruined. By “Pathfinder shit.”

I love the ghosts in this. I love the weird shit they do. The Splatter Man is a great enemy and he’s even foreshadowed by some of the very creepy events that go on in town during downtime. There’s even a nod to investigation with a page devoted to finding out more by asking around, making skill checks, etc.

Here’s the text of one of the rooms:
The guards used this large room as a holding pen whenever new prisoners arrived at Harrowstone. Here, the guards searched the prisoners for hidden items and dressed them in their new clothes, all while a guard sergeant carefully explained Harrowstone’s rules to the new “guests.” Once this procedure was complete, the guards led the prisoners one by one to area S6 to be branded, and thence on to their cells.

Creature: Psychic echoes of shame and anger fill this room—as the PCs enter, have them make Perception checks. Whoever rolls the highest hears a faint sobbing and the clanking rattle of chains, while at the same time being filled with a momentary sensation of hopelessness and the strange feeling of heavy manacles clamping over her wrists. These sensations pass quickly, but as soon as they do, the spirits of the prison cause a set of manacle chains to rise up, animate, and attack. Although there are several sets of old manacles scattered through this room, only one set rises as an animated object.

Note the first paragraph is all bullshit. It adds NOTHING to the adventure. The second is poorly written and padded to fuck and back but delivers a nice creepy little encounter with animated shackles THAT MAKE SENSE.

That’s a fairly typical description, lots of useless stuff hiding something a little above average. Was is bad before it was submitted? Did Paizo ruin it? Was Pay Per Word the cause?

The PDF is $14 at Paizo. I guess they need the padding to justify the price? I don’t see a preview available.
http://paizo.com/products/btpy8g7a

This entry was posted in Pathfinder, Reviews. Bookmark the permalink.

17 Responses to (Pathfinder) Haunting of Harrowstone