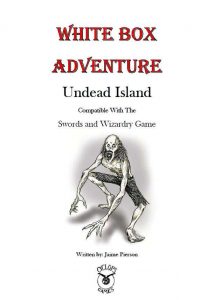 Will the heroes have what it takes to head to the island that has been given the name “Undead Island”? Will they be brave enough to handle what challenges come before them? Find out in this adventure!

This twenty page single-column adventure features a six room dungeon. The designer doesn’t understand how to write an adventure or what Swords & Wizardry is.

Sunday evening ennui? Post-convention blues? Lets fight that by getting a Swords & Wizardry adventure! Oh … wait …. It turns out my life is a living hell.

There’s supposed to be this small town, they want you to go kill the undead on a nearby island. You wander the island, find a dungeon, adventure inside, and kill the big bad.

The town doesn’t really exist. Port town, rough docks, one inn. Those are your details … GO! Oh, wait, no, there are shitty NPC descriptions. (Most) NPC descriptions needs to do two things: have one small memorable thing about them and drive the adventure forward. If they don’t drive the adventure then they shouldn’t be described. If it’s more than one thing, and that thing isn’t immediately apparent, it (usually) shouldn’t be in the adventure. We don’t need to know the tavern keepers maiden name. Or how she got her name. Or any fuckign thing else. Anything more is some mastabatory failed novilist bullshit. Such as this gem:
Helga Gemeyes: Helga Gemeyes (formally Irontoe) was given her new last name from the locals because her deep blue eyes remind everyone of gems. A lovable lass, but takes no gruff from nobody! She owns and operates The Sea Maidens Tail all on her own. She has a reputation for being easy on the eyes (for a dwarf) and rough on the wicked. If she doesn’t like the way you’re acting in her establishment, you can expect to be thrown out by Helga herself!

The island is a hex crawl. Well, rather, we’re told to treat it like a hex crawl. There’s no map and we’re told “For this section of the adventure, you can just simply treat it as a hex crawl until you feel it is time for the characters to reach the destination.” No.

That’s not how older styles of D&D work. A forced fight on the dicks. Forced fights in the dungeons. “Throw monsters at them.” No. Not in S&W.

I understand people differ with me on this point. If you publish a Fiasco playset and label is “5e D&D!” then I don’t think you’ve published 5e adventure. If you publish a Boot Hill adventure and all of the stats use traveller and its in space and it has nothing to do with a western, or even the themes used in westerns, then it’s not a Boot Hill adventure. “But, it’s a fantasy adventure and everything is stat’d for S&W!” Yeah, I agree, it’s closer to the line. But … forced fights are not S&W. No treasure to speak of are not a Gold=XP game. Linear dungeon. This all reflects, on a basic level, a lack of understanding of the play style that S&W is.

Or how to write. At one point we’re told that a stone circle “has never been known to be here before.” Who knows that? The characters are from out of town. There are no NPC’s with them. What’s the point? Or, this little gem of a read-aloud:
“The door creaks as you pull it open from the strange stone floor. A wave of heat rushes past you, making you sweat and your eyes narrow. As you descend a stairway, the heat increases drastically. What have you gotten yourselves in to?”

Nope. You don’t write read-aloud like that. You neither dictate actions or what they think/feel. In one room there’s a box with a key in it that you need. You don’t know what the box contains or that you need it. But there’s a 5HD mummy in the room. I guess you are supposed to grab the box and run out. But how do you decide to do this? By magically knowing whats in the box?

This is as bad, if not worse, than the usual 5e dreck.

This is $2 at DriveThru. The preview is three pages and shows you nothing.https://www.drivethrurpg.com/product/248543/Undead-Island?affiliate_id=1892600

This entry was posted in Do Not Buy Ever, Reviews, The Worst EVAR?. Bookmark the permalink.