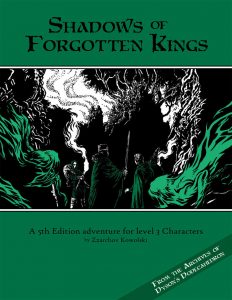 The villages on the edge of the jungle used to be wealthy: they gathered fruits and exotic hardwoods from within the jungle and sold them as wines and furniture to regular merchant caravans in exchange for grains and other staples. But caravans do not make it through anymore. A handful of tattered survivors have made it back to the city and reported being assaulted by wave after wave of panthers that would attack, retreat, and attack again in replenished numbers. The merchant houses want their lucrative route back. The villages need grain and supplies; their people cannot live forever scavenging fruit and huddling by their hearths in fear every night. Tales lead deeper into the jungle – to the ruins of an ancient empire fallen to a terrible curse.

This 31 page adventure uses twelve pages to describe a ruined and forgotten city in the jungle. The encounters form a great neutral environment for the adventure, full of interesting things to get in to trouble with, and the final section of ruins contains a 90 minute timer. The text frequently forgets to get to the fucking point, and drives me crazy with “this room used to be”’s. Be it the writing, editing, or layout, someone fell down. Hard.

This is a pretty good forgotten jungle ruins city. It feels like one, and there’s lots to get in trouble with … without it feeling directed at the party. Each night a tree grows in the heart of the ruins. Fruit ripens and turns in to severed heads with sewn together kips, trying to scream. Eventually they burst and flies come swaming out. Which carry the plague. They fill the city from 15 minutes after dawn to sunset, when they die. Bursting the head before they do so naturally cause gore and maggots to come out of them. Ain’t that a stinker? That’s fucking AWESOME. Now that’s a what I call a curse! In another area there are fallen glass doors that, when you step over them, cause a magic mouth to appear and speak … which causes cursed panthers that roam the ruins to show up. But the next room is a hall of mirrors, which causes them to become disoriented. The entire thing is written in this very neutral manner. It’s not deck stacked against the party, it’s a natural environment that they can exploit, if they are smart enough.

A gold chain hanging from the ceiling may cause you to search the floor, to find what was hanging from it. IT MAKES SENSE. Someone thought for one than one second about the room, and it shows.A shadow demon who doesn’t want to be guarding anymore. Spells on clay tablets. A rosetta stone to crack the ancient language used throughout. Clues in one area to secrets in another. This adventure is CONSTRUCTED, a thing that few are.

And it’s weakened, overall, by its routine use of common sins. The number of fucking times I had to read “this room used to be …” and/or “its all dust now …” is beyond number. You know how I knew the room was a library? YOU CALLED THE ROOM “#12: Library”! And you follow up by telling me the room was once a library? USELESS. And it doe this sort of thing over and over again. It was once decorated with luxury, but now all is dust.

And voice! “Unlike whatever wooden furniture was once in the room, the club has not rotted to dust.”

Room entries bury information important to other rooms inside their own text. “The creatures in the numbered entries are treated like mummies” or”treat the undead like skeletons. When do reach the impacted rooms/text there’s no hint that they are mummies or skeletons. Bolding/etc for monster encounters or other important things is non-existent. “If you put the emperor’s body in this tomb then you get the following bonus.” Great! You know what would have been better? Putting “(#8b)” next to “emperors body” so we all know where it is. The relation of one area to another is great, and it doesn’t have to spelled out in the text, for clues relating to another area but a reference on where to find things is CRITICAL in an adventure like this, that tries to integrate the explanation of what’s going on inline with the text.

Speaking of what’s going, a gentle reminder: background information is ok … but not when you bury important things in there. Like DC checks. Which this adventure does repeatedly, thereby forcing me to read the backstory. LAME. Let me guess, Empire, Fallen, Curse, Evil, Corruptions, Gods. Did U get it right also?

I’m not a happy man this morning. I was hoping for better, 5e or no. There’s a decent mechanic for getting lost in the jungle and for adding some variety to the wanderers, but it’s plagued by a lack of proper editing. The starting village is plagued by pather attacks … but there is no data on that. The NPC (and wanderer) descriptions are lengthy. I don’t want to break up play at the table by reading a two paragraph NPC description before that NPC interacts with the party. I will read it once, a few hours beforehand, and I will glance down for a couple of seconds. That’s it. If it takes me longer than a couple of seconds to absorb then it’s no good. That’s how these things need to be written.

This isn’t garbage. It’s well constructed. A good wilderness followed by a good exploration area followed by a good dungeon. You just need to spend a lot of time with a highlighter going through it. I’m not going to do that. That’s supposed to be part of the value proposition that the designer/writer, editor, and production staff provide.

You know, bits of the writing remind me of that shitty Dungeon magazine room description of a trophy room that went on and on and ended with “but it was long ago looted and now nothing remains but dust.” It’s the same … cadence of words?

This is $7.50 at DriveThru. The last page shows you some of the Exploration system for the jungle, while the two before it show you the village NPC’s. Talk about wall of text!https://www.drivethrurpg.com/product/243857/Shadows-of-Forgotten-Kings-5e?affiliate_id=1892600