The Sinister Stone of Sakkara 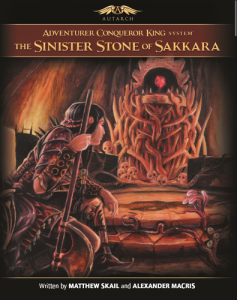 Over a millennium ago, when the borderlands were in the dark grip of the Zaharan Empire, the empire’s sorcerer-priests erected a profane temple to house the terrible artifact known as the Stone of Sakkara. Using the Stone, the sorcerer-priests could birth monsters and abominations with frightening ease and magically command the loyalty of chaotic creatures. The Stone brought its evil masters great power throughout the fell empire. In the centuries since the fall of Zahar, the Stone has lain dormant and forgotten. Now it has awakened, and warbands of beastmen have begun to gather sacrifices to power the Stone’s birthing pools again. Local farms and hamlets have been sacked and pillaged, and entire families have gone missing. The local legate has too few men to even patrol the border; he has none at all to hunt down the source of the evil. Adventurers are needed…

This eighty page adventure describes a keep on the borderlands along with some nearby ruins that has some mixed humanoid tribes in it, and an EHP. It’s the real deal, with a hundred room two-level dungeon and lots going on. It’s also dry and likes to hear itself talk about descriptions of normal bedrooms. It’s sad when you see the real deal obfuscated by verbosity.

You know the deal already. A keep on the borderlands, described in about thirty(!) pages. Then a two-level dungeon in about another thirty pages, and about thirty pages of appendix, etc. ACKS has domain rules, and as you would expect from those authors, the language used in this appears to be quite precise. No more sloppy usage of rounds and turns, etc. The authors seem to understand the theory and rules behind their own game. 🙂

The keep has loot, and named NPC’s and the possibility for a little intrigue. The same goes for the humanoids in the ruins. Factions are implied, there are empty rooms, the maps are large with some variety and a few loops. There’s are some notes on how the humanoids respond. The wanderers are engaged in some activities. Unusual treasure, like monster eggs, and hints for how monsters react based on the raction rolls. (You didn’t dump stat it, did you?!) Traps and tricks, such as mutation pools and the like are sprinkled throughout. Like I said, this is the real deal in terms of a dungeon.

And then they go and fuck it up by writing it down.

There are a few things wrong in this. Factions could be better outlined and/or noted on the map. Some sections don’t have great sections breaks … like a “travel to the ruins” paragraph which appears for all the world to be a part of the wandering monster descriptions. WHile NPC’ have page references for where they spend their time, a few more in the rumors, as well as the rumors being in voice would have been a good thing.

But that’s not the primary sins, not by a long shot. That’s all little nits. The major sin in this is the inability to describe a bedroom.

This is one of the most basic and fundamental skills in adventure writing. There’s been a lot of discussion about it online, not just from me. It’s not clear to me why people still can’t write a description for a bedroom. The basic question is: how much do you need to write when you are describing a bedroom?

I assert (as would many others, I believe) that this means the room description must be short. The DM has to be able to glance at them and quickly absorb the information in a second or so. Yeah, some rooms may be more complex, but that’s a formatting and layout issue. The key concept remains.

How can you accomplish this? BY LEAVING THE FUCK OUT THINGS THAT DON’T MATTER. Information can be implied, sure, and DOESNT MATTER is, of course, a bit subjective. Anything in the room that is normal can be implied, or referenced obliquely. The room description needs to concentrate on what makes THIS bedroom different .. relevant to the adventure. “A sumptuous appointed guest room.” May be all the description you need. In fact, you might title the room Sumptuous Guest Room and not offer a description at all. Or, maybe “with stained sheets and bloody manacles attached to the headboard.” We now have the image of a sumptuous guest bedroom with stained bedsheets and bloody manacles. THAT’S a good description. It implies things. It leaves room for the DM.

We don’t need to know the bed is a full size, made of cedar, with a chest of drawers with six knobs and full of X, Y, and Z. These sort of of exhaustive room description have little place. You’re not writing a novel; this is technical writing.

This adventure makes this mistake OVER AND OVER AND OVER again. It provides in-depth descriptions of the most mundane objects in every room, exhaustively listing content. It kills any imagination and comes off as dry. Every room is litke this, or close enough to generalize as every room anyway.

In town, rules are embedded in the room descriptions. The descriptions engage in explaining WHY things are, and give detailed room dimensions, duplicating the map. The emphasis on this mundanity detracts from the wonder. Common adjectives are used, like “huge” and “large,” BORING. English is a fabulously descriptive language, and that’s even before you start to twist it. But the word “huge” was chosen. Ug.

The rooms descriptions are a SLOG to get through. I’m not even sure a highlighter would fix it, they are so mixed up. The VAST majority of each rooms description is just not needed and clogs up the room, making it hard as fuck to scan. Yeah, it’s a decent little vanilla adventure. But I ain’t gonna slog it while running it. I’m going to pick something better oriented to the DM running it at the table.

This is $10 at DriveThru. The preview is six pages long. The last few pages give you a good example of ALL of the room/key description writing. I’ve also included four example below. The last example, in particular, I think exemplifies the damage done to a room by excessive description.https://www.drivethrurpg.com/product/156763/The-Sinister-Stone-of-Sakkara?affiliate_id=1892600

9. Stable-Barracks Block: See the Stable-Barracks Block Map. The stable-barracks block is 200’ long, 50’ wide, and 15’ tall. The block is built to house one company of 60 cavalry, along with four subalterns (platoon commanders) and one tribune (company commander), collectively spread across the block’s twelve rows.

19p. Latrines: Marble and maple-wood benches are built over an underground water channel that flushes waste into the Krysivor River. Buckets near the latrines are furnished with sponges on sticks, with which the lavatory user can clean himself.

(guard room)
This 30’ wide and 20’ long room is guarded by six kobolds. The two largest guards (hp 4 each) are tormenting the smallest one (hp 1) by tossing its money pouch over its head, while the others enjoy the spectacle. The kobolds are considered Distracted for the purposes of being snuck up on (see ACKS p. 97-98). If the kobolds hear noise in room 2, they will end their game to investigate. If their morale breaks, the gang will flee to room 4. In addition to the guards, the room contains bedding for the kobolds, a round one- legged table, and a pile of gnawed animal bones. The kobolds carry 1d6 sp each, and the two toughest both carry 10 gp in small purses.

16. The Bloody Shore: This roughly oval cavern is about 80’ long and 50’ wide, with a vaulted, stalactite-riddled ceiling about 25’ above. A huge pillar of stone, 20’ thick, rises from the center of the cave to the ceiling. Everywhere else the cavern floor is covered with reddish “roots” that seem to grow up from the stone itself. If cut, the roots leak a thick sap the color and smell of blood. At the back of the cavern is a large pool of red fluid that looks and smells like thick blood. This is a birthing pool for abominations (see Appendix I, New Monsters, p. 66 and Appendix II, New Magic Items, p. 67). A single abomination lurks in the 5’ deep pool. It will only surface if someone enters or touches the birthing pool

(This is my (bad) edit:)
A mammoth column of stone, 20; thick, rises from the pool to the vaulted stalactite-riddled ceiling. The floow is covered with reddish “roots”, growing from the stone itself, which leak bloody sap when cut. A 5’ deep pool of blood contains an abomination that surfaces when someone touches/enters the pool.

69 Responses to The Sinister Stone of Sakkara