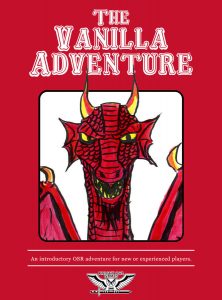 As the players arrive in Boson Bay, it should be assumed that they know nothing of the particular culture of this area. If anything, they will have learned that Boson is a bastion of humanity in an untamed wilderness on the frontier edge of the world.

This 52 page adventure is a wilderness crawl with an inciting event: dragons begin a rampage and burn the town to the ground … and then move on to do the same elsewhere. This starts the party moving and, I guess, a motivation to stop the dragons. It is charming, brutal, winks at Tolkien, and has no Vanilla in it. It’s also single-column and a hot mess. But man … it just needs a little more …

The party is level one and new in town. Night two: dragons burn the town to the ground. Then orc slavers move in and capture the refugees. The burning down of the town is, I guess, supposed to get the party moving in the wilderness to other locations, by stumbling upon them/talking to refugees, and provide an overall goal: stopping the dragons from burning down EVERYTHING. Because that’s what they do. There’s a mechanic in this for which wilderness encounter the dragons burn down each day. The 9HD dragons. (1e was 8HD at Ancient? OD&D is different?) The party move around the wilderness, learn of new areas from others and from refugees, and eventually … well, I don’t know. As far as I can tell there’s only way to learn what is causing the trouble: talking to the orc slavers.

But fuck that, this thing is charming as hell. Footpad Ferd is a thief you can recruit, as is Borrmormere and Eric Snow. Mary Pippins is a halfling in their village you can recruit, as is Billbeaux. The elves are forced to stay in their forest because they wear silver collars that cause their heads to explode if they leave. There are 200 orc slavers in their camp. There’s a poly’d unicorn who has forgotten who she is, and a harpy, her mortal enemy, is after her. The Dorkenstone is in a mine that has awakened the dragons, deep in the caves, and you need to make a -10 save to not go mad. Also, the caves are full of dead bodies and some weird insect hybrid monsters. This place is FUCKING. MADEHOUSE. And I LUV it!

You can talk to just about everyone. The orc slavers. The humans at the various guard keeps. Poor dwarves, elves, halflings, outlying farms, the unicorns. Go ahead, talk to them, make a reaction roll. Try and recruit them to your side.

The mechanic of burning down the main down and then having the dragons burn down everything else is MAGNIFICENT. It gets the party moving and provides motivation for for role playing skeptical people (who haven’t been burnt down yet) and in recruiting folks to help fight the 9HD dragons. As with the best ODD, it seems to started with imagination first and ignoring the deriguour elements. Yeah, and ripping off Tolkien with funny names is a time-honored D&D tradition.

It’s not super clear how the party is aware of the Dorken stone. The map for the Dwarf dungeon is missing, there being just a blank page where it should be. (As is, I think, a temple map.) There’s no scale on the wilderness map in spite of checkins being called for “for each day in the wilderness.” It’s single column. The stat boxes are HUGE, and the writing needs to be tightened up a lot. This thing should come in at 15-20 pages instead of 60, with better formatting. Layout, and tighter editing. It goes out of its way to use vanilla elements and rip off Tolkien, and probably more I don’t recognize, given that John Snow NPC reference. (Dorken stone ripped off from Heavy Metal?)

But fuck me man, this thing BRINGS IT. Each encounter packs and delivers. Lots of creatures. Lots of HD. The encounters are almost entirely written for play at the table with little no bullshit trivia. It’s a fucking mess, a glorious glorious mess! Get the party moving. Let them talk to things. Give everyone a bunch of treasure to tempt the party. Pretty fucking simple formula.

Also, it has Giant Beavers. As is wont in OD&D. Even those adventures not set in Canada.

Want to play some Vanilla OD&D and have a good time? This thing is it.

This is $5 at Drive Thru. The preview is 12 pages, with the (charming) regional map on the last page. Check out those monster stat block on the pages before that! This writing is not very typical of the rest of the adventure, it being mostly prologue. The Dragons, on page eight, would be the most representative, I think, although most the sections are shorter than this.
https://www.drivethrurpg.com/product/205032/The-Vanilla-Adventure?affiliate_id=1892600

14 Responses to The Vanilla Adventure