(Pathfinder/5e) The Ties that Bind 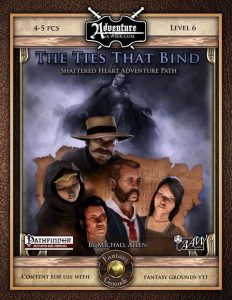 Still reeling from the twin disasters of the Great Schism and the Hoyrall Wars, the halfings of Picollo are a people cast adrift from ancient traditions. A cleric of the Great Mother strives to restore four great holy sites to the goddess, and in doing so restore the bedrock of halfling society.

This 44 page adventure has the party escorting slaves on a sea voyage to a southern-style slavehold run by halflings in full Deep South plantation attire. Oh, there’s a wayward priestess you can convince to change her ways, a ruined temple she’s interested in, etc. That shit is supposed to be the focus, and not the slaves. Sorry, “indentured servants.” It tries to be a sandbox, but it seriously wall of texted and hard to figure out what is going on. And the slave shit is BADLY done.

This is not a bad adventure. It is a badly DONE adventure. The party is hired to accompany a halfling and her large lot of indentured servants on a two month sea voyage to the halfling island homeland and deliver them to a village. That’s the pretext. In reality, she’s a heretic cleric who has fallen from the true faith. Being nice people will help her see the errors of her ways. There are some encounters directly related to this, and others that are just seeds floating around to perhaps take on. It’s less of a railroad than most (well, except for the sea voyage. What ya gonna do, you’re on a boat.) The major MAJOR problems of this adventure are the abstraction of the indentured servants (both them and the press ganged sailors) and the DISASTER that is the formatting of the adventure. I can barely figure the fuck out what is going on. This thing reminds me of the Principia Mathematica; yeah, it’s got something in it, as long as you study the fuck out of it for a week. I ain’t no millionaire’s son; I Got a job, two kids, a wife, three mortgages, and other interests besides studying the fucking text of this adventure. It’s the designer and publishers job to present it logically in a format/layout/etc that is easily digested. And that they don’t fucking do.This thing is a train wreck of wall of text and subplots appearing out of nowhere and lack of meaningful section breaks. I can’t quite figure out what they are doing, but whatever it is it’s A) Consistent and B) Doesn’t fucking work at all. The ship voyage is the just the first little bit of this adventure, everything after is self-characterized as a sandbox, but the sections are so incomprehensible it’s hard to figure out what is going on, or is supposed to go on. After two readings I’m still not sure how everything in the second section ties together.

Then there’s the slavery. Oh, sorry, indentured servitude. (I’ll also include the press-ganged sailors on the ship in this category.) And the racism. The fucking halflings are full on bigots. The artwork shows one of them dressed in a deep south plantation master outfit. First, this is all a little heavy. If I want that BS I’ll go play Mountain Witch. But, ignoring that, yeah, I think it’s a topic you can cover in a traditional RPG … if you handle it right. This doesn’t do that.

The slaves & sailors have no names. They are hardly ever mentioned except as “you need to escort them.” They don’t exist as people. First, that’s ham handed from an ethical standpoint of an adventure dealing with these subjects. Second, and what I’ll concentrate on, it’s bad fucking design.

You’re gonna spend two fucking months at sea with these people. Not even a name for the slaves & sailors? Not a personality? Not a subplot? That’s the job of the designer. One page with names, personalities, maybe a subplot/goal or two. What, you think the party are going to treat them like paperweights? Ignore them or treat them like cordwood? Even if they do it’s going to be a more interesting adventure if they interact, are real people, with real goals.

But beyond that, what’s a party member to do? You’re clearly in the employ of deep south bigots and transporting slaves BY SHIP. There is absolutely no mention of a slave revolt or anything like it. I guess they are all happy slaves, singing & dancing? Sorry, indentured servants. “Hey man, you wanna be an indentured servant?” is never gonna come up during play? How about the obvious bigoted statements? How about the time the bigot bosun whips people until red welts appear on their back? At some point in this party is a party member going to say “Enough!” Me, I’m eager for a bit of the ultra violence and would engage in some stabby stabby early, in spite of my NE alignment. NONE of this is handled in the text. A page of NPC names and a some advice on the slave revolt and/or diffusing tensions would have sufficed. Ignoring this is a MAJOR oversight in assisting the DM in running the game.

On the more traditional front, it’s got the usual stat box/Pathfinder shit. The ship has ghosts, mephits, and slimes on it … quite the small space for space for such density. I’m not gonna claim to ever be on a slave ship but are there really that many unvisited places on a ship? The cross-references suck. At one point you eat some soup and get sick. It impacts the next day. But you have to get to the next day text, a long way off, to learn that. A simple reference to it would have sufficed to allow context.

This thing is a nightmare. Yes, it absolutely has an adventure in it, much more so than the usual 5e/Pathfinder dreck. But the organization is CRAP, more so than usual even. And the lack of Slave Revolt advice … it’s like putting in a kobold with a chest of gold and not giving the kobold stats or describing the treasure. Obvious oversight is obvious.

This is $10 at DriveThru. Page four of the preview shows you the page-long italics read-aloud. Joy.https://www.drivethrurpg.com/product/150280/Shattered-Heart-Adventure-Path-1-The-Ties-that-Bind?affiliate_id=1892600

This entry was posted in 5e, Pathfinder, Reviews. Bookmark the permalink.

11 Responses to (Pathfinder/5e) The Ties that Bind