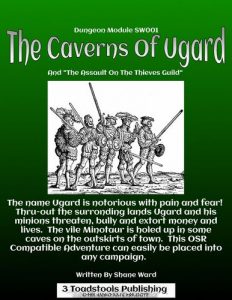 The name Ugard is notorious with pain and fear! Thru-out the surrounding lands Ugard and his minions threaten, bully and extort money and lives. The vile Minotaur is holed up in some caves on the outskirts of town.

This ten page adventure describes a twelve room cave with goblins and a minotaur, as well as a completely separate adventure in a thief guild in the city sewers. The primary cave adventure takes up four pages with the map. It tends to the drab & dry side of the D&D adventure spectrum, but doesn’t drone on.

With twelve rooms, there’s not much room for things to go on. Some goblin guards, a wolf pen, spiders, some friendly dwarves, and the minotaur. The guard play dice, a prisoner is being held ransom, dwarves mine and want a pickaxe back. There’s a big underground lake to get past, full of piranha. (Shouldn’t ALL lakes be full of piranha in D&D? Hmmm, they will be in my next D&D campaign.)

The room text tends to be short, two or three longish sentences and its done. That makes it easy to scan. The text tends to be on the dry side, I think, but clearly an effort has been made to be evocative. Crumbling stone bridges, a strange idol on a pillar emanating a dark green light. A crude jail with sticks wedged in to holes in the ground.

The crumbling bridge is, I think, a good example. Yes, it does tell us that the remains of a bridge wareere in the room. But I think it uses a rather passive voice to get us there, with perhaps some inference required. There’s room for this in places in an adventure, but I think of it more of an aside, after the main description. “Crumbling remains of an majestic bridge litter the lakes surface.” That’s more direct, it tells us what is there now and hints at what was. I’m not the best at this, and second guessing word and sentence structure is not the point of the blog, but the avoidance of a passive voice and engaging in active voice descriptions are a much more effective way to communicate features, IMO.

I could quibble with other aspect also. Some rooms have obvious sounds, or smells, that should emanate from them. Chanting, laughter, animal sounds and latrine smells. It would have been nice to have an odor comment, for example, in adjoining rooms. Treasure also seems quite light. With just +1 weapons augmenting a few coppers and silver. There’s no level listed, so I guessed at 1-3. Most enemies are goblins, with the 6HD minotaur being the big bad. The goblins and minotaur don’t really have a response to their buddies being hacked to death.

What you’re seeing in this review is, I think, a response to an adequate dungeon that still doesn’t meet my (very) high standards. It’s basic, and there’s not much wrong with it. But there’s also not much in it that makes you excited to run it. Noth the romo text, or encounters, or anything else that would seem to fire your imagination. And thus it comes off as a bit dry & bland.

This is Pay What You Want at DriveThru, with a current suggested price of $0. The preview doesn’t work. Me can has sad.https://www.drivethrurpg.com/product/128306/The-Caverns-Of-Ugard?affiliate_id=1892600

8 Responses to The Caverns of Ugard