An Overwhelming Sense of Loss 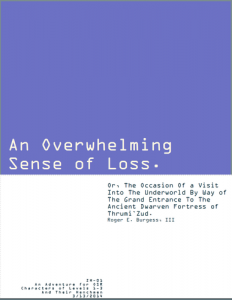 Or, The Occasion Of a Visit Into The Underworld By Way of The Grand Entrance To The Ancient Dwarven Fortress of Thrumi`Zud: SOMETHING brought down the mighty civilization. The sages say it was desperate invaders from below, escaping something even more horrible. Whatever it was, Thrumi`Zud was quickly overwhelmed and sealed, forgotten except in the stories of the old. The vast riches of the fabled Dwarves must surely be hidden within its depths. Perhaps you will be the one to rediscover them. Perhaps there are secrets better left unearthed. Horror lies within. You have been warned.

This FREE 39 page adventure describes the first level of a dungeon with 82 rooms, on about eighteen actual pages. The rest are maps, patrons, new monsters, etc. It has a twerse writing style that makes it easy to run the rooms, with an effort at evocative language use. There are some window dressing issues, but, otherwise, it’s a decent dungeon adventure.

There an introduction to this adventure, a kind of designers notes, placed up front. I like those; a one-pager or less on what the designer was thinking can provide some good insight that might otherwise slip away. This time around the designer notes that the dungeon is geared toward three OSR concepts that, he asserts, don’t get much love: Fantasy Fucking Vietnam, Henchmen, and Reaction Rolls. I must say, he nails all three concepts. He’s using Henchmen as a stand in for the geometric XP charts. If you die at level five then your new level one will reach level five again by the time your fellow level fives reach level six … not leaving you too far behind. This allows for a lethal game which encourages henchmen. Horror, isolation and loss in the dungeon are the hallmarks of FFV. There’s got to be survival tension. Reaction rolls mean that there’s a good chance you can talk to and interact with the dungeon creatures in a manner other than just hacking them down. Or, as I like to say, you can always resort to a bit of ultra-violence, why not interact some first to break up the d20 rolls?

Complementing these design philosophies are the formatting decisions made. The writing style is terse, one step beyond minimal keying, with a decent attempt made at being evocative. This allows the DM is quickly scan the room during play and embellish it fr the players. It’s full on trying to implant an image in the DM’s head and leveraging that to greater effect … EXACTLY what the fuck a room description should do. The room titles are descriptive, in and of themselves, which complements the entire affair. Thus a room might looks like:

Not the most evocative ever, but still WAY above average. It’s focusing on giving an impression and letting the DM fill the rest in, which is what a room should do. Another room has alcoves “guarded” by faded tapestries. That’s EXACTLY the way you are supposed to use language in describing a room. You can do ANY fucking thing you want as long as its clear and jabs the vibe of that room in to the DMs head.

Sometimes, though, the writing engages in window dressing. Weird for the sake of weird. This can be ok, but I generally think its better when the weird is targeted. The opening room has some column covered in glowing glyphs, sputtering like a bad CFL. That’s it. It could have been strong if it were a warning, or clue to something deeper in the dungeon, or even even just general “protection against great evil” stuff. IF the players investigate, and they will, what’s up with them? No, you don’t have to give away every secret, but it would have been great forshadowing.

I mentioned that the writing is decent, but could be more evocative. Clearly an effort was made and it shows and IS decently effective … but could have been better. I know, that’s shitty feedback. I wouldn’t say flat, but, maybe I’m picking it apart because I see so much potential here. Anyway, I was going to compare the evocative writing to the map. It’s a decent exploration map, with a couple of loops … but it also feels like a star formation with little clusters of rooms hanging of the central point. So, decent map, better than most, but not superstar quality.

The encounters, he meat, are generally pretty good. A decent mix, you can talk to things, and a lot of neutral elements to get in to trouble with or exploit. In one room there’s a group of demons (manes) trying to figure out how to loot a temple nearby. In another, a group of warriors has another group trapped in a rooms. There are things going on, thing happening. There are effects in the dungeon that are neutral, waiting for the party to fuck with them and then maybe exploit them in the future for their own gain.

This thing is EXACTLY what you are looking for in level one of an exploratory dungeon.

It’s not rock star, but it could have been. I think I tend to pick things apart, like the wanderers not doing things or the writing not as evocative as it could be, when things are close. But, anyway, this absolutly goes in my DM toolbox.

This is free at DriveThru. The seven page preview shows you the map and the designers notes section but, alas, no rooms. That’s too bad. Every preview should give you a look at the rooms so you know what to expect.
https://www.drivethrurpg.com/product/127617/ZH01-An-Overwhelming-Sense-of-Loss?affiliate_id=1892600

7 Responses to An Overwhelming Sense of Loss