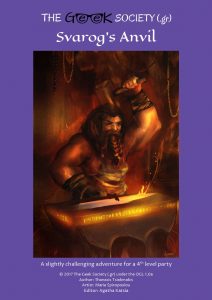 The long lost Dwarven Kindgom of Gleodemar holds a relic of the past, Svarogs’s Anvil, a magical artifact, that when used by a Dwarf it can help mass produce weapons, armor and ammunition. The Heroes are send to reclaim it, but the ancient fort is not empty and the new denizens have settled for good and seem to be also looking for some lost treasure. Will the Heroes manage to win them in a direct (and bloody) confrontation, or will the try to slip through the shadows to reach their goal? Maybe they will be captured and the “cavalry” will have to save them? In this adventure anything goes and it takes only one mistake to unravel the Heroes’ careful plans.

This fifty two page adventure (the appendices start on page 32) details a raid on a ruined keep to retrieve an ancient dwarf anvil. A decent basic premise is ruined by a lack of understanding of basic adventure structure/formatting. It’s ok, but too hard a slog to use at the table.

Conceptually, it’s a decent basic adventure. Journey to keep. Figure out how to get past monsters. Probe depths and loot quest item. Get chased on way back to town. There’s even a kind of basic sandboxy element as you see the keep from the outside and humanoid patrols and figure out a way to get inside. Force, sneaking, deception … all of which will result in The Best Layed Plans of the party … a classic part of D&D fun. There is no greater joy then a plan being devised and then the fun of watching it execute/go south. Elements of the journey to the keep, as well as being chased/followed by the humanoids you stole from, on the way home, give this a decent little third act, something most adventures miss.

There’s nothing really new or exciting about this. Or, maybe instead I should say, it seems to cover all of what you need for a decent adventure, which is in and of itself exciting since so few adventures, especially for the modern games, seem to hit these notes. Three are mercs to use/hire, and even a Casper to perhaps win over to your side and exploit. The mercs even have some personalities that are not expanded upon too much. There’s an order of battle for the humanoids responding. You could view this as a nice little sandboxy humanoid keep.

MOUNTAINS of read-aloud and DM text. The writing is directed at the players. There’s no real map key or organization to the adventure. And, there’s enforced morality.

The last is first. At one point you kill an orc mother holding a an orc baby. The baby is crying. If you kill it your alignment shifts to either neutral (if good) or evil (if neutral.) This is not how alignment works and it is not fun. Yes, I know, many adventures do it. They are WRONG. This is an arbitrary DM ruling and those have not place in D&D. The ONLY way this works is if you tell the party “If you kill the baby your alignment shifts towards evil.” At that point they get to make an explicit decision: take the hit or not. That’s ok (in theory anyway.) I would still argue though that this is a bad thing. Do you really want to have a nature vs nurture discussion in your D&D game? Shall we all read some Peter Singer before or next game? Further, the proposed solution, leaving the orc baby in a crib you found in one of the rooms, is abandoning the baby to die … the same as if you’d cut its throat. Arbitrary DM’s are not fun. The trolly problem doesn’t have a solution. That’s the fucking point. It forces discussion no a hard topic. By saying it DOES have a solution (in a world in which evil gods come down and fart on you, no less) you are wrong..

There’s no map key to speak of, or creature annotations. Guards in the keep walls? It’s in the text not on the map, in spite of the map having a lot of other notes. The text is quite free form, not being in room/key format, and really just a conversation that flows. A kind of linear running text of how the adventure might go.

The read aloud contains text like “You stop to assess the situation.”

No doubt much of this was learned by copying other adventure. Other adventure suck ass. Seriously, the modern adventure is written terribly. The purpose of an adventure is to be used by the DM at the table to run a game. That means no lengthy sections of text. That means text that is easy to scan at the table, find you need, and improvise on. Do you really need the introduction? Could the NPC personality section be rewritten to make it easier to scan? This is technical writing, almost like a dictionary, more than it is a novel. Help me run the adventure. You don’t do that with mountains of text. ANd no, you don’t get to use “written for n00bs” as an excuse. A: don’t pander. B: that’s an excuse.

Too much of this seems like it was written “because you have to have to do it that way”, where the “have to” is learned from modern adventure styles. A REALLY strong edit, not a copy edit, is needed to get the designer to prune back the text to about a third of what’s offered, and formatted much much better,

This is Pay What You Want at DriveThru with a current suggested price of $.5. The preview is eleven pages, and is decently representative. The last few pages, in particular, offer a good example of the mish mash conversational writing style and lack of structure/formatting. https://www.drivethrurpg.com/product/242922/Svarogs-Anvil-5e?affiliate_id=1892600