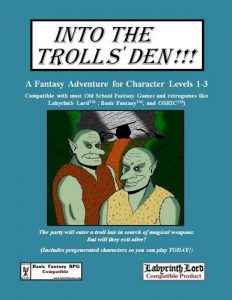 The party will enter a troll lair in search of magical weapons. But will they exit alive?

Some dude in a halfling village asks you to go check out a troll den a day away. Getting rid of the trolls does the halflings a favor and they are rumored to have treasure and magic swords. So wouldn’t you like to go do it? You follow a linear path to get there. At night you have a wandering monster encounter if the DM decides to have one. It’s suggested it be at dusk so spellcasters can still get a full eight hours of sleep in order to regain spells.

[As an aside, who here could actually be a spellcaster? I mean, do you get eight hours of sleep a night? I know, I know, “Rest”, but I’m using sleep. This is the only part of aging I will admit to.]

Ok, have some linear encounters. Get in to the cave. Have some more linear encounters. How about a treant at first level? It’s on the wanderers table. If it were a normal wanderers table I might be ok with that. A “force the party in to a fight/encounter” decision though is different. The same thing with the actual encounters in the wilderness and dungeon. At one point four wolves, each with four HD, attack the party. No chance to avoid. The dungeon proper has three five HD trolls and a four HD rust monster in the same room. At first level. Again, varied opponent challenges are a feature of old school play. You don’t know what you are encountering. But this goes hand in hand with non-linearity. You have to be able to allow the party to avoid, negotiate, etc with those overpowered challenges. “You are first level. You will die from poison in one hour. The ONLY antidote is in the cave. The cave has one room with a 23 HD dragon in it. He attacks immediately.” That’s not old school D&D AND it’s piss poor design to boot.

Your reward are some +1 items. +1 dagger. +1sword. +1 mace. The most generic of the generic. You also get 60gp in books and 507 in coins and gems. Oh boy. Abstracted treasure. My favorite. How about just saying “Treasure Parcel: 567 gp”? That would suck even more joy out of life. Plus, there’s not NEARLY enough treasure for a Gold=XP game. It’s absurd.

There IS some dust in a pouch that replicates a Knock spell. That’s nice. There’s also a scardy cat Druid in the forest that slams her door shut and locks it to hide form the party and only talks in whispers so as to not disturb the serenity of nature. Nice though that.

But, hey, you get full color battlemaps!

This is $2.50 at DriveThru. The preview is six pages. Pages four and five show the druid, with the wolf encounter on page five also. The last page shows some of the dungeon encounters, proper. It’s a fair representation of the writing style throughout.https://www.drivethrurpg.com/product/243107/Into-the-Trolls-Den?affiliate_id=1892600