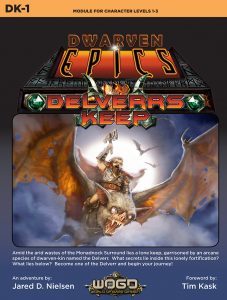 At the entrance of the Below lies the remnants of an ancient keep which is still fortified despite all odds by abandoned remnants of Dwarven lineages called the Delverr.

This thirty page confusing mess describes a dwarf hold with 21 rooms. A combination of fluff piece on dwarves in this particular setting combined with a description of a keep combined with some kind of adventure. I think. After two read-throughs I’m still not quite sure.

Dwarves are in four factions. There’s a dwarf keep sitting on the only entrance to the underdark. It keeps the monsters inside out. The dwarves are unhappy because the four factions live so close to each other. They ask the party to go inside the underdark and break the magic curse that forces them to man the keep. (Morally, that is, not physically.) I THINK that’s what’s going on. Anyway, that’s the end. They escort you to the entrance to the underdark and the module ends. For ten fucking dollars.

At first I thought I had been ripped off and that this was fluff book. Fluff books are ok, I don’t hate them, but I don’t review them. Then, I figured out it IS an adventure. Barely?

This thing has two nice points going for it. First, it’s a nice capstone/entrance to an adventure locale (the underdark.) Journey in and out and you go through the dwarf keep. It’s that whole mythic underworld thing. Also, in encounter one, the desolate road leading to the keep, there’s a rhyme carved in to the stone walls that repeats over and over again with increasing frequency as you approach the keep. Again, nice mythic underworld touch. The entrance to the underworld (IE: dungeons) SHOULD feel special. The rules are all wrong and every perversion is justified, in the dungeon. The entrance to the underworld sets the mood and gets the party ready for that. That can’t be understated.

That’s it. Nothing else nice to say. Everything else is atrocious.

Massive long read-alouds. MASSIVE amounts of DM text. “As you trod along its path your gaze is drawn to the expansiveness of the desolation around you.” Nope. Read-aloud can’t tell players what their characters think and feel. It can relate an environment to the PLAYERS who will then have their characters react. That’s what good read-aloud does. It’s also short. Remember, people don’t pay attention after three sentences. The DM text is MASSIVE. Multiple paragraphs, endless words … almost one page per room in some places. There is no way in fucking hell you can look a this at the table and run it live during play without massive pauses and interrupts. And almost all of the words present are useless. “While it would be perilous to cross the metal gridwork, especially considering the narrow gaps between oil cauldrons and the heat that is emanating from them, a particularly agile person might be able to make it unscathed.” and “There are always ShieldBorne guards here, not just because it’s their assignment, but because over the centuries this is the place where more fun is to be had than anywhere else.” *sigh*

But, worse, the plot is embedded in the room descriptions. Walk the road in encounter one. Get boiling oil poured on you in encounter three. Wake up in jail in encounter 4a and have wounds tended to you. 4b sees you escorted elsewhere. 7a has a dwarf factions asking you to go on the quest. “Should the party agree to this quest, they will be se- creted out via Stone Phaze through the Western nook under the top landing of the South Parapet Stairs, and smuggled into the Trap door stairs leading down to area 21 – South Basement Runic Guildhall under the cover of darkness.” Why the fuck the rest of the encounters were keyed between this room (seven) and twenty one, I have no idea.

Oh, and it ends with a short story for the next module in the series. Joy

The text of the adventure betrays that. I was thinking “this is a novelist”, and indeed, it was. They don’t seem to get that adventures are technical writing, not fiction. They fill the pages with words trying to paint a rich tapestry … that inevitable feels forced and keeps the DM form actually using the adventure at the table.

This is $10 at DriveThru. The preview is a few pages and just shows you some of the endless background drivial that bears no relation on the “adventure.” That sylvan shit doesn’t even come in to to play ever? https://www.drivethrurpg.com/product/242274/Delverrs-Keep?affiliate_id=1892600