(5e) Insurrection in the Abbey 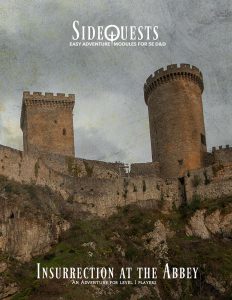 The Kobolds have grown strong – surely strong enough to overthrow the local abbey that they’ve been eyeing! This SideQuest begins as word has spread about the Kobold army that is planning to lay siege and take control of a humble monastery. The only thing that stands in the Kobolds’ way is, of course, your group of brave adventurers. This is a perfect introductory campaign to the world of D&D it is designed to give your first-level players their first taste of combat and dungeon-crawling!

This seventeen page adventure details a small abbey that kobolds have taken over, holding the poor people inside hostage. It could easily be a 1-pager and has A LOT of filler text and overly dramatic read-aloud. Some ok magic items don’t forgive the lack of monster specificity, with only general guidelines offered.

Long lame throw-away hooks, like “missing caravan” and “deliver my letters” have the party ending up outside the walls of the abbey, facing the closed doors. This is the perfect introductory campaign to the world of roleplaying games, designed to give my first-level players their first taste of combat, stealth, and dungeon-crawling! (I know because the marketing garbage mixed in to the text tells me so) so I was quite surprised with the crappiness of the hooks. I mean, I went in to it expecting crappy hooks that the designer put in because they just didn’t care, but then that marketing blurb in the text got me all worked up only to deflate me again with the “missing caravan” pile of crap. Either don’t stick the fucking hook in or put some actual fucking thought in to it. No, that does not mean you need to write a paragraph on it, as you did there. It means you need to turn it in to something that will interest and intrigue the party and a pretext saying “this is the adventure I’m running tonight, bite it or we don’t play D&D” ain’t it.

Hmmm, I get the sense I’m coming off as harsh. If this adventure were one page and 99 cents it would be an ok adventure. But it’s not; it’s seventeen pages and $5, both of which make promises the adventure doesn’t deliver.

There’s a few decent magic items. A magic arrow that always flies towards creatures with an evil heart. In practice, this is just advantage on demons and monsters, but it’s a nice idea. I like the effect, it’s just ruined a bit by the mechanics. A chalice that always fills with water is nice also. Magic items described as effects instead of through mechanics … who woulda thunk it! For the uninitiated, when you name a thing it loses its power. Mechanics bring magic items down the realm of the rule books. “Always seems an evil heart” is open to interpretation, and thus wondrous and mysterious. This is what magic items should be … magical! The boring ass +1 longsword is less wonderous and lame.

The gates to the abbey are locked so there’s a brief section on getting in that outlines some methods the party might use and gives advice to the DM. Great. I love this. You are making the DM’s life easier. The advice is WAY too long, but it DOES also include befriending the gate guard, a kobold. That’s not something you see everyday!

And on the bad front … just about everything else.

The tone is childish. It replicates the “new” tone for kobolds where they are simpleton children who worship dragons and talk like dumb 20’s henchmen. I know tone preferences are subjective, but OVERT humor in games is a turn off for me. I love spontaneous silliness, both in D&D & Gamma World, but when embedded in the rules (newer editions of Gamma World) or the adventures then its a turn off. It’s trying to force the spontaneity and that always comes off as obvious … and therefore bad.

The read-aloud is he usual overly dramatic crap one comes to expect from read-aloud. “You get the feeling that this Abbey has been through some dark times, yet has always managed to find light and redemption in the end.” reads the last sentence of the initial “see the abbey” read aloud. That’s not the sense I get. I get the sense that the designer is a failed novelist and/or trying to hard. It’s critically important that players NOT be told what to think. It’s the job of the designer to communicate a vibe that lets them draw their own conclusions. Your job is to write something that makes the DM communicate it to the players so they get the sense it’s gone through rough times and things turn out ok. Telling them what to think is bad writing.

The DM text contains such gems as “Read this outloud:” right before offset and text-boxed read-aloud. Advice to the DM is “The boss may or may not notice the party entering depending on how they enter.” These examples are not in isolation; in fact the actual useful text might be the exception rather than the rules there is so much padding. The text is being padded for word count for the DM. Not cool. It detracts from the DM’s ability to find the important stuff at the table. Remember, during the game the DM is scanning the text. If you’re writing for a DM sitting down on their sofa reading it then you’re writing for the wrong audience. Other examples include the usual “tell me where the doors go in the text”, duplicating information the map provides.

There’s no real order of battle, so monsters wait in their rooms to die. Well, when the adventure tells you where there are monsters. “You may want to have your party encounter a kobold here” is not adventure design. The walls are supposed to be crawling with kobolds, but there are non listed. Dozens of footprints, but not dozens in the adventure. This basic keying data is fudged. I understand there may be a role for that sometimes, but not as a general purpose in a basic adventure!

While I haven’t touched on it in awhile, this is a good example of why I like humans instead of humanoids. The kobolds add nothing to this adventure. They are just 1d3 hp bipedals to be killed. Why kobolds then? What makes this special? I would argue that it, in fact, makes the entre world LESS special. When monsters are the norm they lose their appeal. Human bandits would have worked better.

As a one-pager this would be a servivable first level adventure. But not as written. No way. Just more dreck.

This is $5 at DriveThru. The preview is three pages and is worthless.https://www.drivethrurpg.com/product/240540/SideQuests-Insurrection-At-The-Abbey?affiliate_id=1892600

3 Responses to (5e) Insurrection in the Abbey