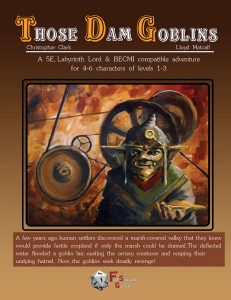 A few years ago human settlers discovered a marsh-covered valley that they knew would provide fertile cropland if only the marsh could be drained. The deflected water flooded a goblin lair, ousting the ornery creatures and reaping their undying hatred. Now, the goblins seek deadly revenge!

This 38 page adventure details an eleven page dungeon and/or mine. goblins are digging a complex under a human dam in order to blow it up and reflood their valley. It’s got some interesting encounters and non-standard magic effects that have that very BASIC and OD&D vibe that I enjoy. It’s also eleven rooms in thirty eight pages … meaning it’s hard to wade through. Long read-aloud, weird read-aloud, directions & dimensions in the text, and conversational commentary to the DM are all in play. It’s serious hi lighter fodder, if you want to go there. I don’t have time in my life for that; thats what I pay someone else for. Or, hope to anyway.

The heart of this is a little eleven room and three level dungeon dig out by the goblins. It’s supported by a couple of wilderness encounters and a little bit of town information that is, essentially, clues and hooks to what’s going on The idea is that the DM takes this clue information and when the party shows up he drops hints form the townsfolk, which gets the party involved. It’s presented in bullet point form another are eight or so various things to find out. I like the format. It is, essentially, just a summary of the town information, rather than detailed room/key format for a generic village. The format should provide enough to let he DM run with them. Unfortunately, the data here is a bit generic. Eight townsfolk have gone missing in the last month. Well … ok. Like rumors, a little bit more local color would have been nice. A drunk who stays out and his nagging wife, that sort of thing. I’m not talking a book, or much more in the way of ward count than is already here. But instead of generic writing “8 people are disappeared” a little more specificity. Something for the DM to run with and expand upon. “Write anything you want!” is a much harder assignment than “write a theme on why Walden Pond sucked.” Yes, I understand tastes vary. There is some line and I just don’t think there’s much room at all for the generic in what is supposed to be a play aid for running a game at the table/ Just how much prep work should you be expected to do?

There are more than a few nice encounters in this, and that’s it strong point. Goblins have torches … with some mini-mechanics for setting huaraches alight. Nice! Or giant cockroaches who can still fight for up to ten rounds after their heads are chopped off. it’s that kind of idiosyncratic stuff that I think a good D&D game lives and dies on. It’s fun. Others are more … interesting. At one point there’s a cart full of dead and bloated animal bodies. What happens to adventurers that dig through such things? That’s right … rot grubs! A perfect application of sticking your nose in. I love it. The adventure is at its best when it’s dealing with these little things. There’s a great little albino outcast goblin, barely cognitive, and ways the party can encounter him. He’s not really an enemy, more of an NPC that could be mistaken for something else. In fact, he’s really just window dressing since he doesn’t really have a part of play in the adventure except as a “would ya look at that!”, ut it still shows the strength of the imagination behind the writing.

But … not the writing proper. It’s terrible. Long.

The usual suspect are at play. First is the read-aloud, which concentrates on the obvious. “There are three exits in the north, south and east” or “the room is 40 x 60.” Yes, these are the things the map tells us. Other times the read aloud is weirdly short and in response to specific character actions. “You open the door to see a dark room.” I’ve seen this before; some designers have their weird obsession with providing read-aloud for every situation. As if those are the only words the DM can ever utter.

The kitchen gets three paragraphs of DM text, to describe to us what is in a kitchen. I know what a kitchen looks like. The extra writing adds nothing to that. What it DOES do is distract the DM by hiding the important fucking information behind stupid shit like “there’s a table up against the wall.” Unless it’s fucking pertinent to the adventure we don’t need to fucking know that.

My favorite example of bad writing in the entire adventure is “once that doo is opened a strange sight awaits your intrepid players.”

This, gentle readers, is SIN. Not just minor sin. Not just bad writing. But SIN, in a major way. The designer is having a conversation with the DM in a bar, telling them about their character. Not. Cool. That’s not the fucking purpose of the writing. This is supposed to be a play aid. This sort of conversational dreck has absolutely no place stuck in a room key. It represents all that is bad and wrong and no fun about this writing style. Evil, pure and simple, from the eigth dimension!

Seriously. Eleven rooms in 38 pages. This is what D&D has become.

17 Responses to Those Dam Goblins