Tomb of the Lovelorn 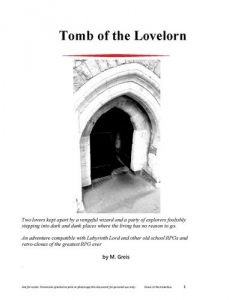 For generations the anger of a scorned wizard has kept two lovers from each other, but now adventurous souls delving into an ancient tomb is about to change all that, though they may never live to see the results.

This nineteen page adventure details a thirteen room tomb inhabited by a pair of undead servants who maintain the place for some (dead) separated lovers. It’s got a great undead vibe going on and good imagery, magic items, challenges, and monsters. It does get a bit long in places, in both flowery read-aloud and DM text, but good formatting helps.

I’m rather fond of these Danish translations. They belong to a series called Hinterlands and I’ve looked forward to seeing new ones; something quite rare for me. They are, at once, both low fantasy and high fantasy. They have that sense of the places being natural and well developed without droning on or appealing to the baser elements like “waste disposal” and the like. My favorite adventures seem to have some thought put to them, not in mechanics or balance, but in motivations and What Would It Be Like … without forgetting that the goal is to have fun.

So, a tomb. Two lovers, one dead and one undead and trapped. Two undead mummy servants who maintain the tomb and sometimes kidnap people to feed to the I-Dont-Know-I’m-dead guy. The party can stumble on the ruins of a grave complex, or encounter some youths just back from an expedition. That’s my favorite since it involves the traditional tavern, stupid braggart kids, and others in the tavern overhearing. Anyway, the thing is supplemented by some rumors which are, generally, more in the realm of hooks. This includes two guardsmen trying to calm a group of peasants by encouraging them to just stay inside at night and lock their doors, as well as a different one that has Fake news! all over it. The more typical dream and//or woman-in-a-crowd are there also, and are significantly weaker.

There’s good monsters and treasure. They tend to all be unique entities and not book creatures. The two mummy-like servants have personalities and will talk to the party, always a good thing. They want to eventually kill them, of course, but the friendly undead before I kill is a classic and I do love the classics! There’s also some undead spirits and ghosts that can/could talk before combat, and even the dead guy who doesn’t know he’s dead. (Getting him to realize that is one of the main adventure goals, so he can move along and meet his dead girlfriend in the afterlife.) The unique nature of them is a good feature, and even extends to the tomb rats, who try and drag bodies away. Those extra little bits liven up combats so they are not just roll-to-hit … something DCC recognized as well. The magic items get good descriptions and have some unique properties that DONT seem like the mechanics were thought of first. The map has some nice same-level features like same-level stairs and hallways going over and under others. I love the vibe those features give exploring parties.

The descriptions are evocative, with swarms of fat flies and putrid congealed bodily fluids and reeks of rotting flesh. An oozing mass of flesh from several merged headless bodies with a sickening stench of rot … quivering flesh covered in leaking pustules with acidic liquid flowing and popping with a spray of … well, you get the picture. And that’s the point: getting the picture. Good evocative writing is short and paints a picture for the DM so they can expand and enhance it for the party. That’s what this does. Well, for the most part.

It falls down on the “short” point. The read-aloud can sometimes tend toward the overly flowery and the DM text can get long. Mechanic effects get long and sometimes there’s a sentence or two of backstory. I know that sounds trivial, but the third time were told the mummies were charged with maintaining the tomb … well, it gets redundant and distracts from the important stuff at the table during the game.

The use of paragraph breaks and bolding is ok, which helps break up the text and focus specific topics to specific paragraphs … something that seems obvious but which many adventures don’t do. So, it’s not unworkable but it is on the edge of it.

This is $2 at DriveThru. The preview is five pages and shows you some of the hooks and rumors and a few rooms. “The darkness retreats from the light” can be seen in the read-aloud, as well as a good sense of the writing style, both positive and negative.https://www.drivethrurpg.com/product/240685/Tomb-of-the-Lovelorn?affiliate_id=1892600

4 Responses to Tomb of the Lovelorn