The Shrine of Sirona 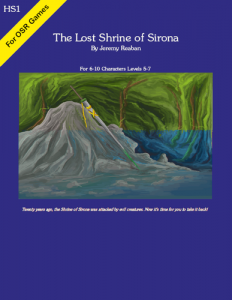 Twenty years ago, the Shrine of Sirona was attacked by evil creatures. Now it’s time for you to take it back!

This is a six page adventure in a small symmetrical ten room dungeon. The dungeon fits on two pages, plus an additional one for the map, so the writing is tight. Essentially a hack, there are hints of better things in Jeremy’s head, both in content and style. I’d like to see those better things.

There’s a half page of introduction before the keyed encounters start so there’s not much to comment on in the background. It’s short to the point of being almost non-existent. It’s just the bare basics. On top of a mountain is a shrine. It was overrun by evil creatures. There are five hooks, all presented in one sentence. Stumble on it, hired by a cleric, hired by the parents of a captive, a town was raided. It’s just ideas. This is straightforward and direct DM text. It doesn’t drone on with generic detail. It knows what it wants to do and does it. It’s not presenting a plot it is instead presenting a location and keeps the non-essential information to a minimum.

The first room has a good progression of text. “In the center of the room is a large fountain with brackish water. Upon closer inspection, there are two large blackish lumps in the water. After a minute or so in the room, two large forms emerge from the water and attack. They are undead, re-animated zombie bears set to guard the shrine from any good beings.” What does the party see first? A large fountain with brackish water. What do they see if they look closer? Two large blackish lumps. What happens in the room? The figures come out and attack. It’s a good progression of text. Giving the DM the information they need in the order they will need it. It seems simple … and it’s surprising how many adventures can’t do it. I could quibble with parts of it. “Large” is a boring word. “Upon closer inspection” is an “if/then” statement that almost always just pads text out.

There are bits and pieces of specific detail that Jeremy describes that adds a lot to the adventure. There’s a hag who’s raising a girl to eat on her 18th birthday. You can find some crude invitations to the party. That’s pretty sweet! Likewise there’s a curse that gets just a few words more. Most curses are just mechanical bullshit. But this one is “a terminal respiratory disease.” That’s exactly the kind of specificity that adds so much to an adventure. Three extra words. That’s it. That’s all it takes. And in most cases they could replace the bullshit mechanics text that most adventures rely on, paragraph after paragraph, over-explaining and filling all loopholes in. But here? It’s just “terminal respiratory disease.” That is EXACTLY enough information. One might say the minimum, and two more words could spice it up even more, but just this opens up the imagination. Guess who’s hacking up black and blood colored phlegm! That’s right! You!

But … there’s just not much going on here. It is, as the designer readily admits, just a hack. There’s a nice little bit with a potentially friendly mimic, and a Helsinki Syndrome waif, both of which add a lot to the adventure. The rest, though, is essentially just a hack. Room 3, the Wyverns lair, doesn’t even get a description, just monster stats. And the big alter room makes no mention of the ogres and naga whose stats are in it, except for tactics. Jeremy also notes that killing Ms Helsinki, as well as taking the treasure in the same room, is an evil act. I don’t know about this … a heads up that it may be an evil act? I can get behind that but the shift to This IS an evil act starts to set off my “enforced morality” alarm … which I admit is a little overly sensitive. I could nitpick the language a bit; One rooms descriptions starts with “This room appears to be bare except for … “ NO! No! No! No! No “appears to be” is allowed! This is just padding. ”The room is bare except for …”

This is a cut above a minimal keyed adventure, but is still just a hack with book monsters and book treasures. A little more work on it would have really bounced this up a lot. Spice up the magic items, the room descriptions/monsters a bit. It wouldn’t take much and the adventure would be quite a bit better. Given the good stuff that IS present I’m confident it would have been done.

This is PWYW on DriveThru with a suggested price of $.50. The preview shows you all ten rooms as well as the intro. Check out room five for the great birthday party or room one for the text progression.https://www.drivethrurpg.com/product/141251/HS1-The-Lost-Shrine-of-Sirona??affiliate_id=1892600

5 Responses to The Shrine of Sirona