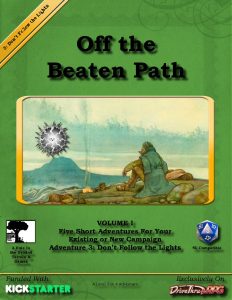 Many of the children of the village of Quiet Acres have been going missing for the past few years. Though their crops and livestock are doing better than ever they cannot explain or fgure out what has happened to so many of their children. The few villagers who have been courageous enough to go into the Dark Forest to search for their loved ones never return. The villagers and farmers in the region are scared to leave their homes at night and many have seen strange glowing orbs oating through the air all throughout the region.

This eighteen page adventure, with six pages of actual adventure, has the party following some child-voiced glowing lights to avenge their deaths by an evil hag. An interesting premise, but three combats, one of the worst cases of telegraphing & abstraction I have seen, and, ultimately, the simplicity make this hard to love.

But first, what the fuck man?! Was October National Baby Eating month? This is the third baby eating adventure I’ve reviewed in as many weeks, I think. I like seasonal activities; I’m kind of disappointed I missed the festivities …

Man this thing is bad. Or maybe it’s a work of genius. What if you had the shittiest most misplaced design goals of all time but then PERFECTLY implemented your plan? This thing is a perfect implementation of the shitty path 5e adventures are/were on. Shitty long read-aloud. Abstracted text. Useless DM notes. Leading the party around by the nose and COMPLETELY telegraphing what they need to do. It just blows chunks, doing a perfect job writing for a DM with a second grade education and players with a first grade education. And yet …

A hag living nearby, pretending to be a wise woman, working her evil but being kind of benign also, is a great idea. The little glowing orbs of light as the souls of children is a great idea. There are bits and pieces of good text. Here’s a little snippet from an evil alter in the swamp: “The shrine is located on a small rise of land within the center of the swamp. It is surrounded by ancient black and gnarled evil looking hardwoods. In the center is a sacrificial altar surrounded by tall stones with abyssal glyphs carved into them.” That’s not a terrible little bit of writing. There’s a Dagger of Blood magic item, predating the invention of metalworking, glowing red when covered in blood. That’s pretty sweet! Perfect little spiffing up of a generic +1 dagger to make it something the party will want to hang on to long after it becomes mechanically overshadowed. There’s another little scene where the hag is confronted, after the party is led there by the lights. Making the hag overpowered and making the little lights turn in to ghost children who suicide their souls to take revenge on the hag would have been a nice little thing. You could have even tied it mechanically to something the players control, making them choose between defeating the hag and destroying little souls. Great little bits in this adventure.

But FUCK ME THIS THING SUX! Mountains and mountains of read aloud. And it has got to be close to the worst read aloud I’ve ever seen. It telegraphs, saying things like “You should go over there and do THAT.” It fucking abstracts to a level of cRaZy! Here’s a little bit: “You reach the edge of the forest and see a large swamp before you. The blue orb carefully helps you walk a treacherous trail deep into this miserable place. The blue orb reaches a point where it says it can go no further and tells you to destroy the place of evil.” Hey! Dishit! That’s the fucking adventure you just abstracted. You don’t even get a “Please destroy it! It pains us!”, instead getting “it tells you to destroy the place.” Fuck me man. And that’s not an isolated incident. “The orbs bring you to many ghostly visages …” Thats the fucking adventure dishit! You ever hear something about the relationship of the journey to the destination? No? You grew up on 4e and Adventurers League/RPGA adventure? I weep for the fucking future.

And then there’s the exciting DM notes! “The manticore is intrigued and excited about combat with the players. It has been a long time since he has fought a worthy opponent.” This adds nothing to the adventure. And this shit happens over and over again.

I don’t know what to say about this. It feels like it’s got a good idea and then goes about implementing it in the shittiest way possible. This isn’t the usual sort of dreck I review. It’s actually got an idea but it’s like the designer doesn’t know to wrap it in anything but the shitty 5e/4e/AL/RPGA formatting style. Hard work in learning how to present ideas would results in a great deal of improvement.

This is $1 at DriveThru. The preview doesn’t really show you anything other than the table of contents … which makes it a pretty piss poor preview.https://www.drivethrurpg.com/product/226071/Off-the-Beaten-Path-Vol-I-Dont-Follow-The-Lights?affiliate_id=1892600