The Bloodsoaked Boudoir of Velkis the Vile 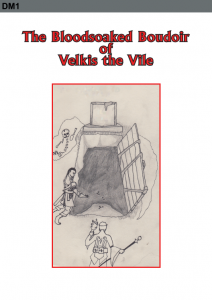 A brief and bloody 9-page module detailing Velkis, whose voice can never be ignored, and the 5 chambers of his subterranean boudoir.

This adventure describes the small and creepy lair of a … well, I don’t know. Let’s say it describes the small “home” of an NPC. Could be an NPC. Could be a bad guy. He’s an interesting fellow with a creepy home. Maybe you could use him as an NPC that turns in to a villain, or a villain that turns in to an NPC? You’ve got options. It’s VERY flavorful but is, perhaps a bit long for what it is: an NPC and a five rooms.

I keep playing the Trogdar lyrics in my head. Velkis the Vile is a man. I mean a undead man. I mean a demon man. I mean an evil wizard man. I mean … well. He’s a mystery … and that’s a good thing. NOT putting ah ard label on something, or describing it fully, or explaining the whys and hows of everything leaves room for mystery and that’s a powerful technique. The DM’s own imagination then run rampant and fills in the details. People call him “the undead man.” RUmors says he’s a demon or an evil wizard. All we know is that he’s tall, gaunt, sunken features and eyes that bulge. The entire description of him, from physical appearance to his speech patterns and topics is great and gives you an IMMEDIATE vibe of how to play him. It’s sticky; once read you won’t need to refer to it again. He’s absent minded and in the “doddering nutso” category of insanity. He also has non standard powers, which LUV in. Spells are for PC’s. NPC’s can do ANYTHING. It’s so much more flavorful! Basically, you are compelled to do what he says, a kind of continual suggestion spell. And every time you kill him he comes back, a little weaker at first, being regrown in one of the chambers in his lair.

His creepy lair. It’s a trap door at the bottom of a shallow grave. The entire entrance is wonderfully described and very evocative. That leads to a short little lair of five rooms. One has a dead tree that has withered apples growing on it. Around the tree are bodies mixed in to the roots. Or a room with bodies, hanging by their feet, blood draining in to a pool in the “office” of Velkis. Or a statue covered with a powder with jewels underneath. That last one is a GREAT example of a classic D&D issue. You know there’s treasure. You know fucking with it to get it will be a BAD idea. Pushing your luck and coming up with off beat solutions are some of the best D&D moments there are. The rooms have a lot of interactivity and are nicely evocative to give a creepy feel.

And yet … let us not forget that unlike other blogs we actually have high standards on tenfootpole. Let’s talk “area 3”, IE: 1/5th of the adventure. Spanning almost an entire page it describes a torture chamber. The issue with this room is the interactivity, or lack there of. It describes a room with branding irons, mini guillotines, the entire mechanism for an automated one, a wooden horse (thankfully no description provided.) This is all in addition to the general room description and the specific portions that deal with the interactive element in the room: a guy locked in an iron maiden. The torture chamber description, and elements thereof, come off as a laundry list of room items present and then further detailed on how at least one was used. These elements add nothing to the room and are trivia, as if you described the contents of a fridge in describing a typical american kitchen. Thanks. We know what’s in a torture chamber. This room really stands out as being out place in the adventure. The rest of the rooms feel very original and interactive and focused on the interactivity and the evocative nature of them.

It’s described as a horror/comedy adventure. I would instead classify it as a classic D&D NPC. Calling it an adventure may be going too far. Sure, it could be used that way, but I think it works much better as an oracle, or guy who makes potions, or some weird resource like that, something that the party will interact with time and again, perhaps until he turns in to a villain. It doesn’t feel like an adventure. It feels like a location in a larger adventure. A place to go to accomplish something. The name here is a bit off putting, implying a comedy adventure where there isn’t one.

This is free at DriveThru. The preview shows the entire adventure.https://www.drivethrurpg.com/product/148398/The-Bloodsoaked-Boudoir-of-Velkis-the-Vile?affiliate_id=1892600

1 Response to The Bloodsoaked Boudoir of Velkis the Vile