Floaters in the Mozz Caves 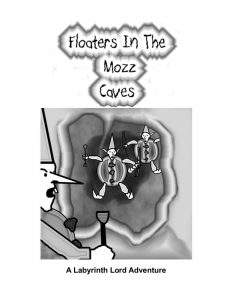 The Blimpkith have taken over the Orc’s caves. There’s no denying the Elves aren’t doing so well either. The party, maybe on their first adventure, are walking around looking for the old Labyrinth Lord. Something floats in front of them… was that him? Let’s see what’s in the cave. What are those, Leprechauns? They don’t seem right… too fat. Blimpkith, haven’t ever seen one of those…

Oh Unbalanced Dice, always there for me when I need a pick me up! This opium pipe adventure is a twenty two page exploration of a cave. An orc cave, under assault by elves, has been taken over by other creatures. It’s got that Unbalanced edge of unrivaled creativity. It runs right up the line of parody/joke adventures but never crosses it. It also feels like the adventures are getting longer, with longer rooms and introductions and that is making things harder to understand a pick out of the text during play. Not cool. The lack of organization and formatting to ease the burden, along with the more almost-over-the-line creatures makes this a pass to run … but better than 99.9% of the fantasy novels ever published by WOTC/TSR.

Let’s cover that creativity first. The bad guys are a breed of leprechaun with a big balloon belly and little arms and legs that float around and shoot at you with suction cup arrows. Sometimes they turn themselves in to two-dimensional colored circles and are used as weapons by other blimpkith. They can, of course, turn party members in to the same sort of floater. One room has a pirate-headed doll that you can unscrew and get some dust of disappearance. The orcs have an anti-blimpkith weapon that looks like a blimpkith turned in to a bagpipe with a gas bag on their ass. There’s a giant turkey. More than one, actually. There’s a scene out of a John Carpenter movie with the head of the orc leader, still alive, hanging from a ceiling. And his body in another room with a chicken head on it. And yet, remember, I don’t think think this is a parody/comedy adventure. It’s written straight.

The text, however, is rough. All of that off-kilter fun is hidden behind and buried in too much text. The Bored Chef room is an entire page long. A paragraph for the chef, a long one for the stove, plates and knives. Another one for how the chef acts. One for what happens if the party eats the food. One for what happens if the party attacks. One for what happens when he gets help. These page long rooms are not infrequent. The main room with the Blimpkith chief is over a page long and nigh incoherent with scantily clad “elf ladies” appearing and disappearing. The creatures themselves get over a page and half to describe all of their abilities, buried in conversational paragraphs. It’s VERY difficult to find things. Bolding, underlining, indents, etc could have all been used to make the information stand out more.

In contrast to this, the information delivery in the shorter rooms are laid out VERY well. “7 dead Blimpkith are floating around the area. An 8th is resting on the ground. Upon inspection it reveals the 8th is a Blimpkith Boomer with 10 charges left!” That’s pretty a pretty damn good progression of a description, from general to specific. Or this one: “A couple of unarmed Blimpkith are playing with the headless body of an Orc. They have made a chicken’s head as big as an Orc’s head and are trying to attach it. The body spasms and they laugh and giggle. The chicken head cackles and spits.” Again, near perfect if you are running that room. You know what to do, and in what order. DId I mention the room with the killer moss that has a pair of elf feet sticking out, wicked witch style? The rooms with more text tend to follow this style also, leading the DM along in a manner that invites the DM to expand the scene … there’s no way to pick things out in the longer rooms.

I encourage you look at the cover photo, it describes the adventure well. A word of advice: don’t run out and buy all of the Unbalanced adventures. Parcel them out. Savour the availability. One day they will all be gone. This isn’t a good Unbalanced adventure to start your journey though. The problems with the text are too many too overcome, particularly with it edging very close to the “too silly” line. But man, the ideas in this are unconventional.

This is $3 at DriveThru. The preview doesn’t show you anything useful.https://www.drivethrurpg.com/product/226308/Floaters-In-The-Mozz-Caves-A-Labyrinth-Lord-Adventure?affiliate_id=1892600

2 Responses to Floaters in the Mozz Caves