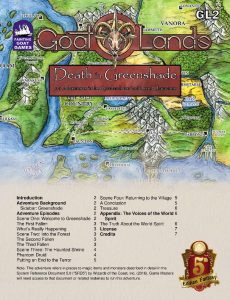 A curse has fallen upon the village of Greenshade and strange things are happening. A decades old secret is about to be revealed, bringing death to the quiet streets.

This is an eight page adventure with a couple of linear encounters. IE: “scene based.” Epitomizing the shovelware problem in RPG adventures, this has no free will and little to recommend it.

While visiting a village you hear a commotion, only to find a dead man who has clearly been attacked by some animal. Three men take off into the forest to chase it. The village is then attacked by some mephits. Following the trail of the woodsmen, you have a couple of more encounters with: ravens, an awakened tree, a boar and an undead druid spirit. Adventure over! Four scenes. That’s it. And encounter is being generous; this is a 1e level of encounters. There’s a body in a tree and the trees are awakened! Or there is a dead body and there’s a swarm of crows! This could be creepy, if they were not presented so matter of factly. More attention to an evocative encounter could have built on these strong themes and delivered something better.

The adventure has one bright point: the ghostly druid keeps coming back until he gets his revenge, which means killing, or an apology from, a village elder who killed the ghost in question. Convincing the elder is a DC check, but … if you fail … he resists going to the ghost druid to apologize, being convinced he’s in the right. The villagers back him. What to do? Drag him off anyway? The villagers resist! Not quite orc babies, but getting close … in reality I suspect most murder hobos would just say “fine, you can all suffer and die. Enjoy the next three days” and move on.

I want to talk about the s”solution” some also. Ghost druid can’t be permanently killed, he keeps coming back night after night until appeased. Which means killing the heirs of the people who wronged him, getting them to apologize, or casting a Hallow spell on the area. There’s an explicit solution. This rubs me a bit wrong. What’s the purpose of the Bless spell? Is it to give you a bonus? What about Blessing things? Does that work to re-holy altars and solve other small issues? This more expansive view of the spell list, and the players actions, is one of the reasons a DM exists. They get to judge if the players actions are enough to lay the spirit to rest. Forcing the DM down a path (Yes, I know the DM can ignore it, it’s the principal) is less than helpful. Advice and guidance are both appropriate, like “tearing down his temple just infuriates him, since desecration is a big theme for him)”, but constraining the DM, and the party through too explicit advice makes it feel like a little Quest icon above the guys head, instead of the more expansive play opportunities that a DM can provide.

These adventures, the ones that feature “a couple of linear encounters”, are a plague upon the market.

This is $4 at DriveThru. The preview is six pages long and shows you the entire adventure. The second page, numbered “3”, shows you the second scene with “second fallen” and /”third fallen.” Note first how they are just combats and then second how they have some potential for an evocative scene, with swarms of ravens gathering and bodies in creepy trees. https://www.drivethrurpg.com/product/226257/Goatlands-GL-2-Death-in-Greenshade?affiliate_id=1892600

3 Responses to (5e) Death in Greenshade