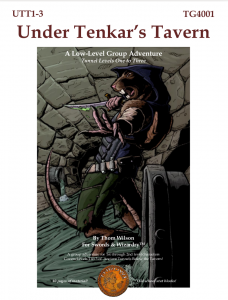 Once a boisterous and popular bar, Tenkar’s Tavern has recently become a place shrouded in mystery and despair. Members of the kitchen staff have disappeared and have not returned in several days. Additional hired hands have also since gone missing. An empty kitchen means unhappy customers and the barkeep Nerik is losing money! He needs outside help to solve his dilemma. Can the adventurers help find the kitchen staff or the source of the tavern’s problems?

I guess it’s that cartoon in the 1e books, the “This had better work!” one, with the adventurers dressed up as ratlings as they stand outside a temple full of ratlings. That’s the thing to blame for all the wererats? Like Aboleths, I just don’t understand the fascination.

Anyway, for pretext reasons there’s a dungeon under Tenkar’s Tavern. The background and introduction is short and the adventure is essentially just a basic three-level dungeon. The whole “Tenkar’s Tavern” thing is just branding and has no impact or theming on the adventure at all. So, good job on the branding! You got me to notice it in the crowd! Bad News: I don’t like feeling like I’ve been tricked. WGFUCKINGSEVEN.

But, on to the adventure. The maps are basic, with the main two being little more than “crosses” in design. The encounters have a decent mix of classic elements in them. Light a brazier and summon a smoke elemental. A shadow that appears if you put out the torches in a room. There’s a cavern with a stream through it and piercers in it, along with a giant idol or two. There prisoners to rescue in multiple areas. There’s also some “empty” rooms that have some nice flavor text that add to the crawl, like an archway with symbols carved in it, permanently dark.

But those feel like the exceptions. The rooms for the most part feel either … perfunctory or … de-rigeur. And the monster mix is really confusing. That smoke elemental? 6HD. Basically, if you light the brazier everyone dies. And the wererats themselves … I’m pretty sure that even in S&W they are magic or silver weapons only? In the first five rooms there are three wererats, one an evil cleric. I thought power levels in S&W were lower than 1e? The magic items are all book items and the treasure seems very light for a gold=xp game;

The read-alouds push the three-sentence rule to the max every time and, frankly, they are not very good. “A long hallway opens in to a square room” is not something that needs a read-aloud. Nor is “:Turning a corner in the long halwa you find a set of stairs leading downward into darkness.” These add nothing AND the text is boring. And the DM text does things like “once filled with a long table and dozens of chairs …” and “once used by temple acolytes …” these add nothing to the play.

This thing has a good encounter density, but it could be better. The read-aloud could be removed or, if it’s important to have it, punched up with better writing. The DM text needs to focus on things that impact actual play. More treasure, more secrets, more added value for the DM.

This is PWYW at DriveThru, with a suggest price of $1. There’s no preview. Everything should have a preview.https://www.drivethrurpg.com/product/225734/Under-Tenkars-Tavern-Levels-13?affiliate_id=1892600

6 Responses to Under Tenkar’s Tavern