A Little bit of Thievery 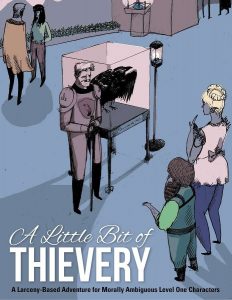 The players are contracted to steal a magic item at a noble’s fancy party, and are forced to abandon their weapons and rely on their wits to survive. Mayhem required and violence (mostly) optional. Success might bring the ire of an elite with a panache for vengeance and money to burn. Beats killing giant rats in the safety of a basement for a few silver pieces, right?

“A larceny based adventure for morally ambiguous level one characters”, sez the byline. Sign me up! This is a 5e adventure, but it’s being marketed as easy to convert. It’s lightly stat’d, with a few DC checks. There’s probably enough treasure/xp, if the party does some looting, for a gold=xp game.

This is a ten page adventure in which the party try to steal a treasure from a guys house during a party. It is NOT a total disaster. It has some good ideas around focusing the adventure information on the task at hand, the heist, but could use more specifics to ground it for the DM. As written it comes off as Just Another Shitty Little Adventure, when in fact I think that’s a mischaracterization.

This is meant to be a social type adventure, not a hack fest. It notes that the best path forward is casing the place, asking around, subtly, etc, and that starting fights will cause the characters to get in trouble quite fast. The players are contacted by “The Spider”, an underworld figure, to steal a rare objects when the local lord holds another of his “I am the richest man in the vale” party. Let’s pay attention to that, The Richest Man in the Vale party. That tells us a lot It tells us a lot about the lord and about The Spider. That’s the kind of specifics that a DM can hang their hat on. Its detail without wordiness. That is EXACTLY what I’m looking for when I talk about evocative and colorful specifics. Not wordiness “I’m the richest man in the vale party.” I had issues with “The Spider”, thinking it was lame, but the picture provided brings the dude to life, with tufts of hair and long fingers. It’s a good example of art bringing the adventure ot life instead of just being filler.

The adventure does a couple of other things right also. There are three main NPC’s described, for the party, and all of their descriptions are (relatively) short and focused on the action at hand. Pompous and plump lord, quick to anger, intelligent and cunning. The guard captain who drinks to fight his ennui. Good solid stuff. Could be a bit terser and punchier, but still good and don’t overstay their welcome.

There’s also a bit of … telegraphing? Or perhaps “facilitation of fun” that occurs. The treasure us on display but guarded. Watching the guard reveals him longingly looking at the drink trays … turns out he’s an alchi. There’s also a despondent noble in the garden who keeps eyeing the hemlock. In both of these case there’s some fun to be had and the adventure helps facilitate that with the party. If the goal of the adventure is to secretly paint the hose black then the adventure needs to focus on painting supplies, paint, and secrecy. ANd that’s what this does: it provides opportunities.

Likewise the mechanics for the infiltration of the party are decent. The first time the characters caught where they should not be they are asked to move on. The second time it’s a small DC check. The third time they are removed. It’s not just pass/fail, but leads to move adventure, quick talking, roleplay, and an escalation of effects. There’s also a small little section on Small Talk, what happens if the party avoids it, and suggestions for how to make, with specific conversation starters for the NPC’s. These are good, and, again, shows the value of specifics in the adventure. The designer is writing for the DM, to make their lives easier. You don’t do that by listing all of the contents of a room but by anticipating the needs ot DM and focusing your efforts in those areas. Pre-heist, there are some rumors to find out in town, as well as consequences; careless characters will find that the local lord knows someone has been asking questions about him … more opportunities for difficulties during the adventure. And speaking of, there’s a nice little section on difficulties for the characters AFTER the adventure, based on the consequences of their actions during the adventure. Nice integration there.

But … there’s clumsiness here which, I think, reveals a lack of familiarity with social adventures. Or, maybe, a life in which the only adventures seen are “three encounters and a boss” kind of shit fests. Judged on that scale this is a masterpiece. But, it’s lacking in areas that would make it more well rounded.

For example, there are no party guests of note. This adventure SCREAMS for a small table of 15 guests each with a few words/a sentence of personality in order to spice up the party portion. And, of course, the subplots that go along with the servants, party guests, and family … none of which is present. As written it seems like one of those mostly generic 5e/PF affairs; the extra content, a half page, would have done wonders to bring the place to life.

I’m not overly fond of the descriptions either. The read-aloud is the usual atrocious stuff (although short) that communicates nothing. There’s a “mean guard.” Mean is a conclusion; better adjectives and adverbs would help cement an evocative environment. The outside, waiting to get in, is a good example of this. There’s a line to check in, but the entire thing is written as boring as possible. It comes off as a sparsely populated party. Think, instead of the introduction we get to Gatsby in that latest movie … that’s a “I’m the richest man in the vale” party! Or think of the bustle and hustle and excitement in the air in ANY of those Jane Austen movie balls. None of that comes across or is intimated in any meaningful way. .

The entire thing is written in room/key format. That’s TERRIBLE for an adventure like this. The small talk rules are mixed in to one of the room keys. The “caught where you should not be” rules are mixed in to the outside guard post. Those things deserve their own separate sections, with a minimal key for the actual rooms. The map, while noting guards on it, doesn’t have a key (what’s the “m” on the map mean?) And the map is SCREAMING for more information, like showing patrol patterns, or some such. And, drawn as a normal 2d/flat map you don’t get a sense of the roofs, windows, and the like which is critical for an adventure involving a heist.

Those issues are, however, somewhat mitigated by the short length. It IS easy to find things because there’s not a lot of excessive bullshit to clog things up.

This is a serviceable adventure and it much easier to run, with more potential, than the vast majority of the dreck I review. I think the designer has some potential. This adventure, proper? Well … the core is solid but there’s not enough going on at the “party” to get me interested.

This is Pay What you Want at DriveThru, with a suggested price of $3. The eleven 5-star reviews seem excessive, but, it is DriveThru. 🙂 The preview shows you the entire adventure. That great pic “The Spider” is on the third page. You can’t miss it. 🙂https://www.drivethrurpg.com/product/145152/A-Little-Bit-of-Thievery?affiliate_id=1892600

2 Responses to A Little bit of Thievery