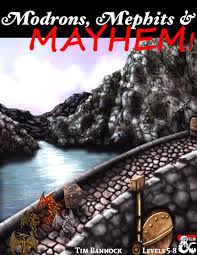 It is primarily set in a modron-designed research facility that has been abandoned by its creators but retains guardians that are still active. Additionally, two groups have broken into the facility with their own goals in mind; the githyanki and their red dragon cohort are antagonistic and provide the main source of combat in this adventure, while a modron traveling with a few mephits may prove friendly although ultimately troublesome.

This seventy page adventure describes a three-level modron lab with about sixty rooms total. Only thirty or so pages are devoted to the dungeon, with the rest being appendices for monster stats, maps, etc, and it manages about four rooms per page when it is being terse and the rooms are simple. While for 5e, t’s trying to bring in elements of older play, with factions, better (non-linear) maps, interactivity and a generally slower/more exploratory environment. It’s trying to be organized, and succeeds admirably on several points, but the bulk of the text had readability issues, in both clarity and verbosity, which detract from the more interesting room elements which don’t come across well because of it.

A village water supply, from a river, has dwindled to nothing and you go up river to find out what happened. Discovering the water trickling from a (long-existing) dam you explore it to discover some other factions, friend and foe, inside. At heart, this is an exploratory dungeon crawl with another enemy faction (and the dungeon faction proper) already inside, and some allies to potentially recruit. Both the initial village, and another along the way, serve as rumor sources to collect information before venturing in. The NPC’s are all gathered in a small section, with personalities, that makes wading through their (longer) descriptions later a lot more tolerable. In addition, the information you can gather is separated out nicely in bullet-form faction, making it easy for the DM to locate and scan. It’s a great formatting decision.

The maps are decent and the three-level dungeon does a pretty good job of feeling like a lab to explore, without going full on gonzo nutso scifi. There are lots of levers, dials, viewscreens, and so on to play with. Command words to guardians with clues left about, prisoners to rescue to join forces with, simple room puzzles and interactivity. There are things to figure out and use to your own advantage when exploring/interacting. The core concept of the dungeon is a good one and the rooms, while not standouts, hit that bar of “good enough” in terms of variety and interactivity.

The adventure falls down, though, in the actual descriptions used to explain the rooms. They are long. They concentrate on irrelevant things. They try to explain WHY things are. In essence, the descriptions tend to focus on the irrelevent parts of a room, which obfuscates the more relevant portions. What follows is a lack of clarity and a hinderance to scanning the room and running it effectively.
Room D1-2, on page 13, the first level, is a good example. The first paragraph is all background, what USED to happen in this room. “The river originally flowed from X to X and then to Z but is now dry.” and so on. It tells us nothing new and adds nothing to the room. What USED to happen is irrelevant unless it impacts the party NOW … and ancient history seldom does.

The second paragraph tells us the evil faction came through here, heard a command word, and used it, thus the automated defences are still intact. The adventure falls in to this trap, explaining WHY, in a lot of rooms. There’s a decanter of endless water, held by an iron golem, who says the command word over and over again, in order to get a stream of water. It’s currently disabled, hence no water stream. There’s a trap here. The rules, those three books, they are for the players. There’s not a single word in any of them that binds a DM. You don’t need to use the rules to explain or build an effect. It happens because MAGIC. There’s no reason for a decanter until you want the party to steal it (which they will.) A water nymph pieced by a spear that bleeds water, or any of literally a ZILLION other things could create water. Dead unicorn heads, or horns, whatever. There’s never a reason to explain WHY. (Or, almost never, anyway.) All of that just clogs up the room, detracting the really important stuff: the evocative descriptions and DM notes. It’s hard to scan during play with this much text involved.

The read aloud tells us the pool is 40 feet deep. It’s only 20 foot full. It’s 15’ wide and 20’ deep. Steps lead up 5 feet. These are not evocative descriptions. The text should get a vibe across to the DM, so they can enhance it and get it to the players. Steel-walled, a deep clear pool with a catwalk over it. A gleaming glass tube coming from the ceiling and ending in the water. Present a vibe. The map can handle the dimensions.

And there’s another issue: cross-room issues. There’s another room nearby that causes things to happen when you step on the catwalk. But you don’t know that until you get to that room. Likewise, there’s a room nearby (the one with the decanter in it) that is at the end of a long hallway that’s patrolled, with a faction guardroom down near the other end. But you don’t know that until you get to the faction control room. “Uh, sorry, hang on guys, it looks like that hallway is actually patrolled, the one you came down.” Ideally, you integrate this sort of stuff either in to the map (the patrolled hallway) or reference it in another room. “If you step on the catwalk see room 1-3.” or some such. You need a pointer. Otherwise you’re forcing the DM to be INTIMATELY familiar with it or scribble on the map, make notes, etc. And that’s not the DM’s job. That’s the designers job.

I don’t want to come off too harsh. For a 5e exploratory dungeon, this thing is headed in the right direction. It’s got a nice order of battle for creatures in the dungeon, doesn’t have more than sentence or so on monster tactics, and uses bullet points pretty effectively in room descriptions. What is really needs is a stronger focus on the CORE of the rooms. The evocative nature. The text should be terse, but not minimalist. Every line should help the DM run the room. A BIG edit for verbosity and more evocative descriptions (not longer, more evocative) would do wonders for this and turn it in to a really good 5e exploratory dungeon.

There’s a free preview of ALL of level 1. Check out the last page & last column to see room 2/2a, with its backstory and explaining why. The entirety of 2/2A, that is seen here, could be shortened to maybe three sentences and be just as, if not more, useful to the DM running it.
http://www.dmsguild.com/product/215276/Modrons-Mephits–Mayhem-Free-Preview-Edition-Adventure-Levels-46