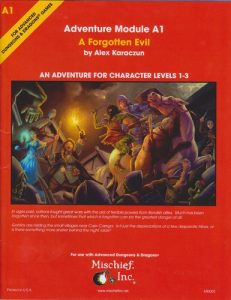 In ages past, nations fought great wars with the aid of powers from fiendish allies. Much has been forgotten since then, but sometimes that which is forgotten can be the greatest danger of all. Goblins are raiding the small villages near Caer Carega. Is it just the depredations of a few desperate tribes, or is there something more sinister behind the night raids?

This forty page adventure details a three level dungeon with about forty rooms, as well as a small overland adventure. Goblins have been raiding and the party is sent to find & kill them, ending up in their base; the tower. Inside is a “goblins have taken over a ruin” dungeon, stuffed full of magic and monsters. Long & meaningless descriptions that seem like filler are the highlights of this and, frankly, I’m struggling to find this adventure brings to a table. It’s just Yet Another Goblin Lair adventure.

You’re hired to go find and destroy some raiding goblins, while the regions own militia pull back to protect the villages and homesteads from the raids, which at least makes sense. The party is sent out in to the wilderness to find the goblins with no hints, NPC’s to talk to, or any supporting information even about which way the goblins come from. They wander the wilderness, use the wandering monster chart, until the DM drops a hint and they find a ruined tower wherein the goblins lair. I’m not a fan of most of this adventure, but this really stands out to me. It’s all abstracted away with no support for the DM to run a meaningful encounter in getting hired or asking about. No ruined villages or homesteads or any resources if the party asks about … which they are sure to do.

The ruined tower has ruined ground floor and then two dungeon levels. The dungeon levels are pretty standard with goblins, a couple of other demi-humans, some undead in old ruined areas, and a few vermin. It’s mostly uninteresting encounters with monsters stuffed in to rooms who react when you open the door, and little else to explore or interact with. The bugbear sleeps in his armor, there’s no real response to an incursion outlined, it all feels like just monsters stuffed in a room with not much tying it together besides “it’s a goblin lair.” It’s best when it is defying this, such as with the young white dragon that lives in the tower and may fly out. But there’s far far too little of this.

The descriptions are long; long read-alouds and long DM text, for meaningless text. Once, after a long read-aloud, there was a DM note, the first sentence, stating “the knives in the description are worthless.” That’s the story of this adventure in a nutshell. The mundane is expanded upon both in the read-aloud and in the DM text. “Characters may enter this room and begin searching it.” Well, that’s great to know, I guess. Can they also breathe in and exhale? It seems petty, but repeated, a hundred times, it gets tiresome. You’re looking for that special spark to make the rooms come alive and instead you get just filler.

The magic items are another example of this. There’s an attempt to provide lore, a background, for, oh, lets say six to eight of them, mostly weapons. I appreciate a little extra in magic items, a terse/nice description, a non-mechanical effect, and so on. But the lore sections for the magic items get themselves bogged down in to backstory that is unlikely to impact play. They are at their best when they say things like “baron butthurt will pay 3x-5x the price to recover this sword” … IE: when they lead to more adventure and drive action. Otherwise it’s just more useless trivia and that shit has a place of about one short sentence for people/places/things.

To top it all off, the disguised bad guy has a ring of mind shielding and needs to get away so the other adventures in the series can go off.

Byrce’s Tip o’the day: It’s always best to just kill all prisoners in a dungeon. Because, you know, THE. EVIL. ONE.

This is a rough adventure, with LOTS of foes, and a lot of magic items to go with them. The room descriptions drag on, describing trivia, and the entire thing lacks a certain focus of purpose, with little interactivity. It’s just another generic goblin lair, this time in a ruined tower.

It’s $10 on DriveThru. The four page preview shows you almost nothing, it being the first four pages of the adventure and all backstory and how to read a stat block. At best, the last page or so describes the generic hiring hook and lack of support for the DM in running the hiring/search.https://www.drivethrurpg.com/product/183885/A1-A-Forgotten-Evil?affiliate_id=1892600

3 Responses to A Forgotten Evil