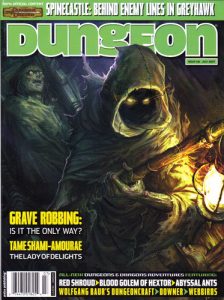 A beast stalks a village. Killing it just causes it to return the next night. The party has to figure out that the body of a recently dead boy needs to be returned to some standing stones in order to get rid of the beast. The townfolk and churchman won’t want the corpse of the mayors son engaged in some pagan standing stone ritual. The complications of the resisting town, differing and conflicting motivations, could almost make this a Zzarchov Kowolski adventure … if he were illiterate and knew nothing about writing an RPG. The adventure is more like a twelve page outline. There’s very little specific support for the DM, except a six room rooms with lots of room descriptions that don’t matter. The hiring, the investigation, the monster hunt through the village, the troubles with the villagers in returning the body … none of it is supported. It’s just an outline, that should be six bullet points long, expanded endless to twelve pages without actually providing any actual real support for the DM. That’s too bad because if it WERE there then it would be a complex social adventure, with an almost LotFP potential ending.

Typical computer rpg adventure. Go to market in abyss to get info. Get attacked. Go to palace and talk to demon to get information. Go to prison. Go elsewhere to free prisoner. Have big fight at the end. It’s ponderous, full of the minutia of backstory … I don’t see how ANY person could possibly run this adventure.