The Atheneum of Yearning 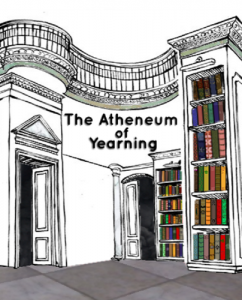 By Oswald
Self Published
LotFP
Levels 1-3?

The atheneum was a center of learning which became the headquarters of a dangerous cult. Where forgotten ones hoped to be chosen for the pure land. Their rituals went wrong during the city’s raid. Now it’s been forgotten inside its containment cube for 50 years. Until a secret entrance was found in the basement of a nearby house. Only the players have access to this hidden chamber for now.

This nineteen page adventure is a three level tower with about fifty rooms in it. It describes a ruined home/library in a city that has been magically walled off … and now has a tunnel coming in from underneath from a nearby home. Greed, or searching for something specific, the factions and weirdness inside make this like a more active/interactive/action-oriented Tower of the Stargazer.

This is an interesting little adventure, something like a mix between Stargazer and maybe Spire of Iron & Crystal. The default hook is, as described, a loot-the-place-we-just-found-the-way-in adventure. The map here is three levels with various parts of the levels, especially the second, blocked off from other areas because of a collapsed floor. You can see them, both from below and on the the second level, and there are multiple stairs and ways up. This makes the map one of the better ones I’ve seen lately. It offers tantalizing scenes that pull the players in certain directions.

This also allows for faction play, with five being detailed. Where they live, what they want, and how they are related to each other. Billy needs a couple of things, then he can become The Chosen One and kill the Queen in the queen faction. There’s an interconnectedness here that many/most dungeons don’t have and that kicks things up a notch, particularly with the factions and their relationship to each other.

This is complimented by a nice overview of the street the house is on, and a timeline of what happens on the street, all on a small and well laid-out section of a page, almost like bullet points. I can’t compliment the format enough. It covers all sorts of things to make the OUTSIDE portion of the house, as the party retreat and re enter, as much fun as the inside, if not more so. Nosy neighbors, street scenes, gangs moving in; it’s well done and is exactly what you’re hoping to see when you want to make the OUTSIDE of the dungeon lively. It’s enough to get your imagination going and run an entire little vignette, or twele, but doesn’t do it either by droning on or boring you with generic random encounters.

The various encounters in the house range from weird vignettes, like corpses, that set the mood, to encounters that almost have a dream-like feel to them. If you go through a certain secret door, to a secret garden, you meet your mother. You know it’s her, even though she’s wearing a mask. She tells you not to go back through the door, because there are monsters there who killed your father. She can also give you a bonus. There’s a heavy innocence and innocence-lost theme to things. Pans lost boys fifty years later, as children who could have been The Chosen One (ala Potter to CS Lewis) They are weird, not in a gonzo way but in a slightly off kilter melancholy way.

The adventure isn’t perfect and I can point out a couple of flaws. The first is a little petty. The very first words of the first level tell us that every surface of the library walls is covered with shelves and overstuffed with books. This leads to the inevitable questions of “what are their titles and can we systematically loot and sell them?” … neither of which is addressed. A book title generator and/or value/quality system would have hooked in nicely with the timeline and factions, as the players “mine” the books and deal with the factions and the goings on in the tunnel house and the street outside of it. That would have been an excellent tie in.

The designer could also use a little more evocative language and scene setting. “Iron railing connects the pillars.” or “central spiral stairs leads to the middle chamber.” or “Each chamber has a skeleton, stacks of books, a cot, a chamber pot, writing utensils and paper.” These examples are all not at the sterling heights of evocative imagery. It’s important that the text be arranged to make sense to the DM and also to jam a scene in to their head.

This is PWYW on DriveThru, with a suggested price of … $0! That’s right, it’s free! The preview doesn’t work, but, hey, it’s free, and worth checking out.https://www.drivethrurpg.com/product/217721/The-Atheneum-of-Yearning?affiliate_id=1892600