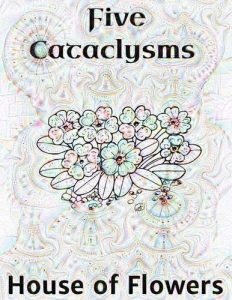 In a warm place sits a mansion made entirely of many-hued flowers, their vines forming the unnatural architecture of mankind. The house grew around two entities, the Heart of Eternity, and the Heart of Chaos. The Heart of Chaos mutated all life around it, changing it beyond recognition, and the Heart of Eternity gave the new life the order necessary to survive. The Hearts arrived long before mankind existed, and they have been locked in a perpetual struggle ever since. A proxy war is fought between the two, using flowers mutated into ambulatory forms as pawns. The battles are fought entirely inside the house, because while immensely powerful, the influence of the Hearts cannot extend outside. The structure around which the house grew, the Chapel of the Void, is the reason the Hearts cannot leave. Only dreams they create are dreamt beyond the house. Locals in the area know well enough to avoid the house, as all who have entered were either killed or scarred horrendously, but they all receive the dreams. Those who sleep in the area often dream of entering the house, fighting through the rooms, kidnapping one of the Hearts, and sacrificing it on the altar inside the Chapel of the Void. They dream this will bring them great wealth and power. The dreams lie.

This is a 78 page adventure in a weird flower structure with 64 rooms in it. It has about ten pages of introduction, then 22 pages of room descriptions, and then the rest being supplemental information and tables. It ABSOLUTELY has that weird non-standard vibe going on, a hallmark of some of the great OD&D adventures. It’s got a lot of interesting ideas, and a great concept, magic items, creatures, and the rest. GREAT content. It’s also got a vision in presentation and a descriptive style that, while it should work in theory, makes my brain hurt trying to decipher the text. I can let some formatting sins pass in exchange for good content, but, man, this one is hard to justify.

Oh, so a vaguely house-like structure made up of flowers. Inside are two enemies: In one wing is the Heart of Chaos and in another the Heart of Eternity (with rules for shoving one into someone’s chest, Vecna-stylet! Yes!) Their plant-creature minions contest with each other in a third section. They send dreams to people outside the house to get them inside and to kill the other heart. And in the immortal words of a cartoon person “Dude, this is pretty fucked up right here.”

Vines with flower bulbs hanging from the ceiling. Crystals glowing with sunlight with rotting bodies under the soil tended by flower-people. Non-hostile flower people. A deep chasm with 5000 skeletons in it, some wearing obvious treasure, with flower-people keeping you from fucking with it. A room FULL of multi-colored webs crawling with tiny spiders. Six creatures encased in multi-colored amber. Room after room this goes on. Enter a room, be tempted, or face a situation … most all with a kind of theming going on. It’s similar, in that way, to Blue Medusa and other dungeons with strong room visions … perhaps combined with a bit of the fab Dreams of the Lurid Sac. These bizarre and … unearthly? encounters. They force the players to engage or ignore, to tempt fate or use them to their advantage. I don’t think Funhouse is appropriate term for these. ‘OD&D’ seems closer. I don’t know what to call it, but it’s pretty exciting to see.

Likewise, the magic items. There’s a big table of a hundred at the back and the adventure is worth having just for that table alone. A snow globe that when you shake it causes a blizzard to spring up within 50’. A crown of thorns that allows the players to grant 1st level cleric spells. A vial of boiling blood .., that is actually a creature. A monocle that lets you see in to a strange dreamland. An oar that, affixed to a ship/boat, surrounds it with mist and allow you passage to one of the lands of the dead. EFFECTS. It concentrates on EFFECTS. There’s some mechanics attached, usually, but never more than about a sentence or less. But the effects. I’ve overjoyed to see magic items that are mysterious and wondrous!

It is also an OH. MY. GOD. nightmare to dig through the rooms. It’s got a decent idea for formatting. Each notable thing in the room is bolded as the first sentence of a paragraph, with the paragraph adding detail. Thus room 1 has two paragraphs, the first starting with the bolded “Vines with flower bulbs hanging from the ceiling” and the second starting with the bolded “Even soil” The meat of the paragraphs follow the bolded sentence, the details to reveal upon further explanation. Thus the DM can quickly give an overview of the room, using the bolded portions that scan quickly, and then follow up as the party inquires. Why uneven soil? There are drag marks? What type? They look like body marks, and go through the east doorway. I like this format. I DO think it helps you scan quickly. My more-than-a-quibble comes with the specific implementation in this adventure. The bolded portions are a little weak, being facts and lacking strong imagery in them. I’m looking for “bulbous flower bulbs” or “oozing flower bulbs” or something like that. Further, the “mundane” text is not really organized well, which becomes a pain in the ass when the room is non-trivial. Room seven is the Vibrating Lotus Pond. Murky pond water covering the floor. Lotus flower of many colors floating on the pond. Multicolored glittering beneath the pond. The middle paragraph is long. LOOOOONG. There’s beetles in them, and, while not a lot going on, I’d argue, there is a lot of text. It’s good, but I don’t think it’s organized effectively. IDK, bullet points, or some other technique? As with the Fungi Chemist I think the strict devotion to the vision hampers the presentation. I’m in favor of a strong vision, but as we move it out of the realm of the platonic and it hits the road we need to mangle it if it conflicts with higher values … like ‘understanding.’ IN an attempt to be MORE understandable it is less. Pulling out the “beetle combat” for example, to another paragraph, and/or pulling out the treasure (present in the last two paragraphs) to a separate one would have allowed the upper paragraphs to focus on the environment while the combat/treasure focused on the actions.

I would also take exception to the random monsters. Flower people, and maybe angels and demons, could show up. There are tables for each that you can use to randomly determine them. Nice in theory. I would have also liked to have seen a table of pregen ones. Just one sheet full of stats for each of them, perhaps in addition to the random rules. Then I have the option of doing more but I’m not forced to slow down play by rolling. Yes, I could do it myself ahead of time. Or … the fuckign designer could have done it for me to help me out. There’s a few other things, like having to roll saving throws every 20 minutes in two wings of the dungeon. I’ve not sure how I feel about that. I like the “time pressure” aspect but dislike the tedium of the mechanic. Meh. But, on the plus side, it does something Death Frost Doom did, using spells in “appropriate ways.” Protection from Evil, or something similar, will prevent the save from having to be made. How about Bless? Sure, I’d say, if the player makes a good argument. This use of the “utility” nature of spells is something I favor.

I note it also has another Death Frost Doom callback … both skeletons, angels and/or demons could be let loose upon the world, if folks fuck the place up. There’s some cosmic shit going on inside with things in balance for a LONG time. Fucking with it will mean consequences.

If you are a fan of OD&D weirdness, Lamentations, Lurid Sac, or want some new magic items then this thing is for you. I think it’s non-trivial to run at the table, mostly because of the organization of the detail in the paragraphs. It that were addressed, or the bolded portions were much more evocative, then I may be able to look past my misgivings. Fantastic content, but hard to make my A-Team list.

This is PWYW on DriveThru. The preview is broken.https://www.drivethrurpg.com/product/212613/House-of-Flowers?affiliate_id=1892600