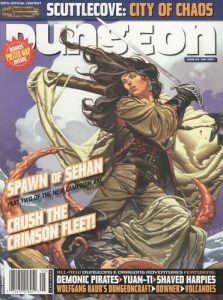 It’s rare I find a morally repugnant adventure. (And maybe interesting what I put in that category …)

A hot fucking mess of an adventure with one redeeming quality that’s not enough to save it. You are hired to go to a black prison and transfer two “disappeared” people to a different prison. I like to play NE and even _I_ have a problem with that! It’s hard to see the party agreeing. Anyway, the prison has been taken over by imposters, escaped prisoners. They get the party to go in and free their two buddies from some meenlocks, through deception. This causes the party to travel down a linear jail corridor, encountering prisoners on both sides, on their way to the “correct” cells. Thus each prisoner has a backstory, personality, and sometimes an interaction with another prisoner. Anyway, you fight some meenlocks and then go to the surface where the first set of imposters attack you. It’s linear and the highlight, the various prisoners, are not really given an opportunity to shine, given the constrained & linear nature of the adventure. It’ back loaded with the meenlocks and combat and really goes out of its way wit be convoluted, up to and including the “lets attack the heavily armed party when we see them again” logic of the prisoners. I like the having to put up k00ks in the dungeon idea, I just don’t think its implemented well here at all. And a black jail? Jeez. It’s like some Carcosa “we need to bloodily sacrifice 12 children to cast healing on you Bob. I’ve got there here, got at it and bathe in their blood once you slit their throats.”

Spawn of Sehan
A shit-ton of authors
Level 9

Part two of a three part series. I think it was the winner of the “design the shittiest series” contest? Sixteen room linear dungeon with nothing going on. The highlight is a succubus feigning damsel in distress. Sorry baby, we kill all prisoners and hostages on sight; it’s safer that way. Walk in a room, get attacked. Open an urn, trigger a trap. There’s nothing to this. Again. There’s no adventure, just encounters. I find this design style disgusting.

Part eight of the twelve part Savage Tide adventure path. Chick who hired you has been kidnapped by her (now) undead brother, since none of your party’s actions can be truly meaningful. Also, you seem to care that the pirates have some shadowpearls. The backstory setup takes about a million pages so you can be bored to tears by things that won’t matter. Where the fuck did these people get the idea this was a good thing? You go to piratetown to track people down, only to find your contact kidnapped, ambushes (CR11, you’re level 15. The adventure correctly notes the party could just kill everyone in town, but doesn’t deal with it well. IE: it’s a shittly designed adventre for level 15’s, unless they agree to play along.) It would be more fun as a direct assault, letting the players flex their might, instead of the linear shit-fest with forced encounters and the overreliance on conspiracies that high level adventures always seem to hang their flag on. A Death Slaad guard … oh how the mighty have fallen.