The Oracle of Stone and Flame 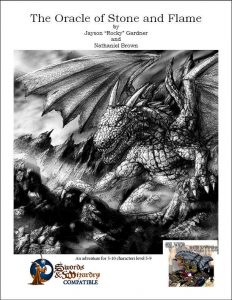 This is an eleven page eleven-ish room dungeon with an oracle at the end. It has a couple of good ideas for encounters, but implements them in clumsy “they attack!” manner. When combined with bad read-aloud and unfocused writing it falls far short. The room concepts need to be yanked out and reworked.

Let’s talk the good first, no matter how limited it might be. The core of this thing is that there’s a massively ancient dragon guarding an oracle. That’s mythic. As Miracleman/Marvelman will attest, it’s never easy getting the answers you want, they always sit atop Mt Olympus. And OF COURSE there’s a massively ancient dragon guarding it. That’s how this stuff works. I think it’s great; a classic trope that is telegraphed from the hook: go bargain with the dragon to ask the oracle a question. Everyone knows that at the end there’s a dragon to get past. This foreshadowing/telegraphing is a great technique for building anticipation. Oracles are great hooks. It all combines to be a great concept.

Likewise, one of the entrances is in The Undead Sands in the swampland. While walking along you find a huge fallen tree carved to look like a pathway. And skeletal hands reach to grab you and pull you under. That’s the entrance. The entrance to the mythic underworld was a big theme in the OSR community a couple of years ago, and I must say, this is nicely themed doorway in. There’s also a room with kobolds in it. They dance around with their spears and sing “more meat for the queen, we have meat for the queen.”

But it’s just a combat encounter. As are the skeletons. As is the dragon (probably.) And that’s the problem, the adventure doesn’t know what to do the rooms. There are these decent room ideas that are all just “they attack.” Skeletons attack. Kobolds attack. Annoyed cult leader attacks. Two skeleton sit up in coffins in you enter the room and turn their heads to look at you. They attack. Grells hide behind the door and attack. When you finally met the dragon, who will bargain, it stats it has a clear goal: get more loot. The dragons chamber has no treasure.

Well, the read-aloud says it is sitting on a massive pile, but “massive pile” is the last we hear about it. The read aloud tells us we’re tired of gnats and flies in the swamp. The read-aloud tells us the room dimensions. The read-aloud tells us “they attack!” or “as you finish the last of creatures off …” Where the read-aloud is not being too explicit the DM text takes up the slack, describing to us what is going on in the map: “Following the passage will lead to a small room, 15 feet square.” or telling us how many doors are in the room, just like the OTHER Dm text, the map, does. But then the REAL heart of the rooms gets almost nothing and what there is is bland. “Laying across the path is a huge tree carved to look like a pathway.” Uh … what? This is the entrance. This is IT. The main main. The real deal. And yet the description is both vague and not evocative. Disappointing, to say the least.

Speaking of treasure, the how does 12 bracelets, each worth 50gp and a couple thou from some gemstone eyes strike you? How’s that for PHAT L00T that you can use to level? The kobolds have 1d6 gold each! “They set of silver is worth 100gp to a collector.” How much XP does it take to level at level 8? A bajallion? There’s no thought, no design, just like with the room “they attack!” nonsense.

When I was in fourth grade I wrote a short short about the adventures of me & a friend in a haunted house. All I can remember now is that we kept getting knocked out … and that’s how my tiny brain made room transitions. In this thing you suddenly find yourself in the dragons chamber at the end of room four (in the swamp entrance, which is not connected to the other.) At least I think you do. The adventure just says “please turn to the dragon and the oracle to continue the adventure”, with no transition at all. And the room before that? “The sound grows louder and louder until the party passes out from over-stimulation.” I cast silence. I cast deafness on myself. We tunnel out. Teleport. How many fucking ways does the party have to deal with this DM fiat? Also a bajillion? When it’s not doing this then there’s a cave in block the passage back. Done asking a question of the oracle. You are teleported back to town. *sigh*

It’s on DriveThru as PWYW. The preview is five pages. Page two, the first text page, tells you everything you need to know. The skeleton hands pulling you down. Treasure. Cave ins to block the path in room 2, bad read-aloud, bad DM text. Enjoy.https://www.drivethrurpg.com/product/216056/The-Oracle-of-Stone-and-Flame?affiliate_id=1892600

2 Responses to The Oracle of Stone and Flame