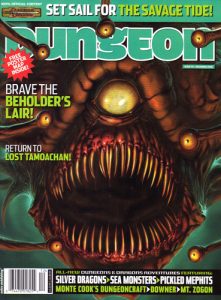 Savage Tide adventure path, part the third: a sea voyage. This installment is hard thing to review. It’s heart is in the right place but it suffers GREATLY from the three-column Dungeon format. Combined with the word-bloat common to Dungeon it makes this thing very hard to run. But … it has great elements. The party is hired to be “ship #2” in a two-ship expedition to a colony on an island and this adventure deals with the voyage. “Ship #2” allows for the party to make their own decisions but for there to a lifeline available. Run the ship how you want and if things are too bad then ship 1 is there is bail you out. And, of course, vice versa in certain situations. There’s an allotment of NPC’s to spice things up on board, some generics to die horrible, and some locations to visit along the way. “Hey kids, Meteor Crater is right on the road to the Grand Canyon!” Linear, but not exactly a railroad! The NPC’s have decent motivations and are interesting enough to get them involved with the party. As always, they could be organized better for use during play … a typical failing. But, still, recurring folks on a three-month voyage is a great thing to have! And their detail is PLAY focused, not just generic trivia that will never come up during play. There’s too much detail in place, such a entire column of text on “securing a vessel” when much less would have sufficed in an adventure that’s a follow on to capturing a vessel. In other places a little more could have been included, such as better help in recruiting crew and provisions in town before the party leaves. Similarly, there’s a small section, a column or less, on ship combat, but it suffers from the Dungeon 3-column text block problem, making it hard to reference during play. There are a few other nits, like a priest who dies a day after getting sick to reveal a slaad … nice, but if it were dragged out a bit it would be even nicer. Also, a stowaway assassin that takes a DC30 to find if the party searches the ship … because there’s an event built around them. The players should be REWARDED for thinking of searching the hold, not punished because it’s on the DM’s ToDo list for later. The thing is full of nice little vignettes and encounters on the way to the island. In short, I think it’s a pretty damn good sea/travel adventure, one of the best I’ve seen. It needs more expansion before town is left, and reference sheets for important things like NPC’s, combat, etc, and a complete rewrite of the encounters to pull out important details … but it’s heart is in the right place. It just needs a complete reworking to be useful …

2p backstory
Holy fuck, what a mess. This is an investigation in to a missing person … at a theater. Ug. Fucking Magical RenFaire shit. Anyway, there re about a thousand NPC’s, each of which get almost an entire page to describe them, along with an entire section on Gather Information checks for each one. MASSIVE amounts of text and a unfocused writing style make this one a bear. “In addition to the dressing rooms, the PC’s may decide to investigate the grid-like iron catwalk and rafters above the stage from which the moving scenery pieces [long list] and heavy sandbag counterweight are suspended.” Yes, Nicolas, they might. Which is why I, the DM, and looking at the “Fly Rail and Grid” section of the fucking adventure. This kind of crap just clogs things up. Scene/Event based and a mass of text make salvaging this one a losing cause.

Oh man … can you accept the fact that the city has a storage facility/warehouse that has a bunch of slaadi employees? If so then do I ever have the Grimtooths adventure for you! You’re pleaded with to rescue a guys mate from a vault where she’s being held captive. There’s some nonsense about them being disguised silver dragons, but that’s irrelevant. This adventure JUMPS in to things immediately. Seriously, the keyed locations start on page 2 and I’m not sure I’ve EVER seen a Dungeon backstory/into that short! And the intro even includes a bullshit plan involving a magical shield and portable hole to smuggle the party inside the storage vault! It’ all feels a little Harry Potter/Gringotts, with a healthy dose of Grimtooth. Walls of Force that appear and disappear, teleport circles, rolling boulders. And every guard is either a slaad or devil, with the boss being a beholder. The maps a fucking disaster and needs a cross-section to clarify the confusing relationship between the levels and corridors. I’m going to forgive the abstracted treasure because the entire thing is so ridiculous. I love it! No gimping. High level. Absurd enemies and deathtraps! A glorious glorious mess! A little (lot) restatting could make this a fine low-level adventure also. Hard to recommend to seek out, but if you NEED this sort of adventure then this is IT.